I didn't know what to expect when I went to see Andrew Dominik's Killing Them Softly, but after watching eight moviegoers leave the theater in the midst of the film, I had fun imagining why people hated it.

Was it because most of the movie took place in rainy slum areas of New Orleans, or was it perhaps due to Dominik's cheerful curse-filled immersion in the tawdry milieu of scummy lowlifes? Greasy junkie Russell (Ben Mendelsohn) has such skanky-looking hair, one can practically smell his rank body odor. Or was it because of the movie's allusions to uncompromising gangster films such as Goodfellas (1990), The Friendship of Eddie Coyle (1973), and The Godfather (1972)? The American populace likes its gangsters prettified like Ryan Gosling and Emma Stone in the upcoming Gangster Squad. They don't like having their noses smeared in the detritus of the 2008 economic recession--the closed businesses, empty parking lots, abandoned buildings, and squalid bars where the rhetoric of the 2008 presidential campaign on omnipresent televisions drowns out the characters' conversations. Dominik relishes the underside of spaghetti freeways where men in black leather jackets get wet in the rain as they beat each other up. Where's the glamour in that?
If one can view Killing Them Softly as a rude tonic designed to add a layer of social satire to a depiction of recession-era crime, then one can appreciate its nuances in spite of the incongruities of Dominik's attempt to graft Cogan's Trade, a 1974 George V. Higgins noir novel onto a 2008 version of an unnamed city (New Orleans). I admire the integrity of Higgins' sordid vision (he also wrote The Friends of Eddie Coyle (1970) which became the celebrated 1973 movie by Peter Yates starring Robert Mitchum), and I appreciate Eddie Coyle's dirty realism, its Irish-American Boston underworld that served as a reply to the relative glamour of The Godfather (although, surprisingly, Pauline Kael blasted Eddie Coyle's relative rootlessness, its "shallow and tedious" world while praising the more autobiographical intensity of Martin Scorsese's Mean Streets (1973)). But, I doubt that the less ethnically specific thugs of 2008 would have necessarily worn the rose-colored shades and the tacky leather jackets (not to mention the the large muscle cars they drive) in Killing Them Softly. Dominik may figure that culturally we're primed enough to groove on Tarantino-esque 1970s nostalgia, but then the many clips of Obama, Bush, and McCain spouting political bromides sound odd given the many visual signifiers of another era. 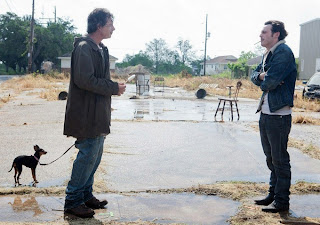 Still, Dominik keeps finding creative ways to tweak the mythical implications of his actors.  Ray Liotta's gangster persona has mellowed since his manic portrayals of the "Wild" in Something Wild (1986) and his gleeful thug Henry Hill in Scorsese's Goodfellas (1990). As Markie Trattman, the man who stupidly admits to his fellow poker players that he once robbed the very Mob poker game that they participate in, Ray has a giggly moment that evokes his earlier joy in crime. But then greasy Russell and Frankie (Scoot McNairy) hold up the game again, stealing thousands of dollars, thereby making Trattman the fall guy by association. Markie must face the consequences of enforcer Jackie Cogan (Brad Pitt) being brought in to fix things by the peculiarly squeamish corporate mob bosses (notably the nervous Driver (Richard Jenkins, whose role shares the petty administrative side of his Sitterson character in The Cabin in the Woods)). Dominik's casting of James Gandolfini as the erstwhile hitman Mickey gradually becomes outright funny. The mob hires Mickey to "wack" one of the robbers, but Mickey lives in despair because his wife wants him to sign divorce papers before he returns to jail. He drinks nonstop and consorts with prostitutes until he reaches total stupefication. Like Russell, Mickey illustrates the problem with giving in to every base male impulse (something that many other gangster films would celebrate). Mickey gets so strung out, he can't even function, thereby goofily complicating all of the authority that Gandolfini brings to the role.

As Jackie Cogan, Brad Pitt first appears about fifteen minutes into the movie to the tune of Johnny Cash's "The Man Comes Around," thereby equating his arrival with the day of judgment.  As Cash sings, "Then the father hen will call his chickens home/ The wise men will bow down before the throne." In his black boots and leather jacket, Jackie conveys a calm but contemptuous ethical core, of a sort. He may be a killer, but he's restrained and business-like in his thinking, and he helps the viewer see through the hypocrisies of Driver's corporate mob overlords just as easily as he can manipulate the smellier denizens of his underworld. Pitt occasionally mixes up his star appeal with daring choices, so one can view his work in Killing Them Softly as his temporary return to Fight Club (1999) edginess (Lord know what will happen to his star persona after the release of World War Z). Like Leon in Leon: The Professional (1994), Jackie cleans up after the movie's messy plot, which helps one partially respect his character in spite of his blunt methods.  I imagine that Pitt knew that audiences may not like the movie's confrontational aesthetics, but, he's talented and famous enough to just not care.

Speaking of aesthetics, Andrew Dominik's use of sound in Killing Them Softly provides compelling thematic discordances.  He begins the movie with jarring cuts between an Obama speech and various songs that foreshadow the movie's basic dichotomy juxtaposing a newly impoverished underworld with the larger financial meltdown precipitated by Wall Street excesses (one form of corruption unleashing another). When Trattman gets beaten up in the rain, Dominik expressionistically mixes in the sounds of water splashing on metal, a train's horn, and other discordant noises that punctuate the oblivious cruelty of the scene. At times, the political jargon of the politicians on TV (Bush ironically talking of "widespread loss of confidence") drowns out the voices of the characters. At other times, Dominik places us in Russell's nodding off point of view as sound and vision fades in and out, making us realize how much Russell relies on drugs to not be aware of the trouble he's in. Moreover, Dominik's score reminded me of Scorsese's use of music in Goodfellas.  The director even includes the 1933 "It's Only a Paper Moon" in a way that parallels Blanche Dubois' pitiful singing in Tennessee Williams' A Streetcar Named Desire.

By mocking Obama's call for community, Cogan echoes Michael Corleone's business ethics. When Obama claims that "Out of the many we are one" on TV, Cogan snorts and replies by affirming American individualism, but only in The Godfather-like sense that business is another word for genuinely murderous self-interest. As he says, "In America, you're on your own. America is not a country. It's just a business. Now pay me." In the midst of inviting the viewer to compare criminal venality with larger Wall Street corruption and economic collapse, Dominik has fashioned a politically loaded portrait of America that proves too truthful and ugly to be very commercial. It's just not soft enough.