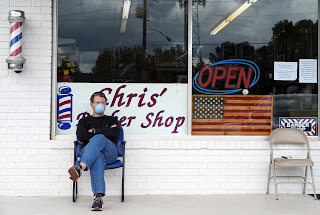 ---"Public-health officials broadly agree that reopening businesses — especially those that require close physical contact — in places where the virus has already spread will kill people." --from "Georgia's Experiment in Human Sacrifice" by Amanda Mull

---Gov. Brian Kemp’s aggressive scheme to lift Georgia out of COVID-19 lockdown may cost many thousands of lives, according to models prepared by epidemiologists and computer scientists at Harvard and the Massachusetts Institute of Technology in partnership with The Daily Beast." --Olivia Messer

---"Apparently we're going to need outbreak after outbreak across the country to get people to take this seriously." --Leah McElrath

---"Reopening states will cause 233,000 more people to die from Coronavirus, according to Wharton model" by Kristin Myers

---"A report released Thursday by epidemiologists at the University of Minnesota was even bleaker, projecting that the disease would continue to spread for another 18 to 24 months. In their study, the authors laid out three possible paths forward: one scenario in which the end of lockdown is followed by a successive series of smaller peaks, each producing a re-intensification of mitigation measures; one in which the end of lockdown is followed by an even bigger peak next fall and winter, far beyond what we’ve seen so far; and a 'slow burn' scenario, in which mitigation measures as successful enough to moderate future peaks and avoid additional shutdowns, but in which there continue to be infections and deaths for an extended period of time.

'This thing’s not going to stop until it infects 60 to 70 percent of people,' one of the lead authors told CNN. 'The idea that this is going to be done soon defies microbiology.' On April 30, NBC News reported the federal government, even while signaling optimism about the course of the disease, had ordered 100,000 new body bags." --David Wallace-Wells

---"For the four other known human coronaviruses, which cause varieties of the common cold, immunity lasts just months." --from Amy Davidson Sorkin's "The Rush to Reopen"

---"All these people had to do was wear a mask, stay apart or stay inside."


---"The new coronavirus is likely to keep spreading for at least another 18 months to two years—until 60% to 70% of the population has been infected, a team of longstanding pandemic experts predicted in a report released Thursday.

They recommended that the US prepare for a worst-case scenario that includes a second big wave of coronavirus infections in the fall and winter. Even in a best-case scenario, people will continue to die from the virus, they predicted."  --Maggie Fox

---"Imagine what a food scare would do. Imagine a heat wave hot enough to kill anyone not in an air-conditioned space, then imagine power failures happening during such a heat wave. (The novel I’ve just finished begins with this scenario, so it scares me most of all.) Imagine pandemics deadlier than the coronavirus. These events, and others like them, are easier to imagine now than they were back in January, when they were the stuff of dystopian science fiction. But science fiction is the realism of our time. The sense that we are all now stuck in a science-fiction novel that we’re writing together—that’s another sign of the emerging structure of feeling."  --Kim Stanley Robinson

---“For us employees that work in production, we are treated like modern-day slaves.”

---‘Oh, my God, it’s not just that everyone I love is unemployed or underemployed and can’t make their maintenance or their mortgage payments or their rent payments, but now all of a sudden those jerks that were flying around in private helicopters are now flying on private personal jets and they own an island that they go to and they don’t care whether or not our streets are safe,’ then I think we could have massive political disruption.”

“Just as we come out of our holes and see what 25 percent unemployment looks like,” she said, “we may also see what collective rage looks like.”  --Laurie Garrett


---"The world is facing a famine of Biblical proportions."

---" . . the panic-neglect cycle will inevitably continue. The U.S. will miss the chance to reexamine how systemic failures of its health-care system left so many citizens vulnerable, or to put in place measures that might forestall another resurgence. It will get hammered by the same damn virus again, and be driven into more severe lockdowns. People will tire. Compliance will fall. The nation would lose its single most effective weapon against the pandemic—the willingness of its citizens to make individual sacrifices for the sake of all. It could forcibly quarantine uncooperative people or impose criminal penalties, but “we know from past outbreaks that criminalizing public-health responses makes people go underground, perpetuates stigma, and fractures society,” Phelan said. “For the marathon we’re facing, we need solidarity.”

Over the coming months, we need “to normalize COVID in the public psyche, and reinforce that this will be a part of our day-to-day lives,” said Kissler, the Harvard disease modeler. “Many people I've spoken with are aghast at the thought. We thirst for a swift and decisive 'victory.' But I'm reminded of images from World War II as people in London walked to work, briefcases in hand, against a backdrop of bombed-out buildings. I think we are in store for a similar period in history, as we learn to make greater peace with the world's chaos and our own mortality.”  --from "Our Pandemic Summer" by Ed Yong

---"What’s unknown is how long immunity lasts—and only five months into the outbreak, there is no way to know. If it’s for life, then every survivor will add to a permanent bulwark against the pathogen’s spread. But if immunity is short, as it is for the common coronaviruses, covid-19 could set itself up as a seasonal superflu with a high fatality rate—one that emerges in a nasty wave winter after winter." --Antonio Regalato