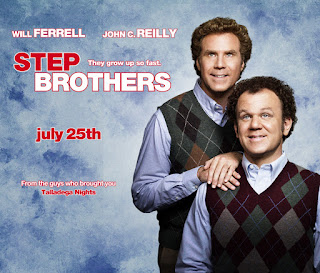 Considering that Step Brothers is R-rated, why would younger adult guys pay money to see two men in their forties acting like they are 13? Some tentative answers:

“It would be hypocritical of me to dismiss the appeal of this fantasy and silly to deny that a lot of these movies manage to be both very funny and disarmingly insightful about the male psyche. But I suspect I’m not alone in growing weary of the relentless contemplation of that psyche in its infantile state, and of the endless celebration of arrested development as a social entitlement.”—from “Here Comes Everybody, Again” by A. O. Scott

“Sometimes I think I am living in a nightmare. All about me, standards are collapsing, manners are evaporating, people show no respect for themselves.”—a passage from Roger Ebert’s review of Step Brothers

Step Brothers at least confronts the issue of immature modern man head on. One guy in his forties (Will Ferrell as Brennan Huff) lives with his mother (Mary Steenburgen). Another fellow in his forties (John C. Reilly as Dale Doback) lives with his dad (Richard Jenkins), who is a doctor. When the mom and dad marry, the two terminally immature guys find themselves thrown together Brady Bunch style under the same roof and even in the same room. They fight, curse, play territorial games with Dale’s drum set, and eventually become good friends once they realize how much they have in common.

I liked the beginning of the movie, in part because the parents seem semi-human. I was expecting them to be treated as lampoon figures in a teenage-oriented world, but given the nature of the step brothers, their parents end up looking semi-sympathetic. Also, the initial sparring between Dale and Brennan has some humorous moments. Spoiled and lazy in suburbia, Dale plays Guitar Hero all day as Brennan gets idly aroused by an aerobicizing woman on television. Even though Brennan was just laid off from the local PetSmart, his mother tries to find some way to celebrate his accomplishments as a “gifted singer.” Also, the film includes an inspired character named Derek, Brennan’s obnoxiously successful younger brother (Adam Scott), who has a family and pulls in over 500k a year as a businessman. Acting much like Tom Cruise, Derek is arrogant, over-bearing, and good at brownnosing Dale’s dad, so finally Dale punches him out of the tree house.

After Derek’s arrival, however, the film has nowhere to go, mostly because the There’s Something About Mary dog-poop-and-genitalia extremity of the humor rules out much in the way of character development. Brennan attempts to bury Dale alive one evening, but the nullity of that gothic gesture just emphasizes the film’s increasing vapidity. Since the makers of Step Brothers assume that maturity and drudging employment will eradicate whatever made the leads entertaining to start with, their already thin characters effectively freeze. All one gets are increasingly loud scenes that do little to mask the lack of a coherent third act.

Brennan and Dale do try to seek help from psychiatrists. Since they remain stuck in terminal regression, however, there’s not much hope for them. In dramatic contrast to Adam Sandler, Brennan and Dale have their self-aware moments where they talk of living in a “fantasyland” where they should try to accept some “responsibility.” But since growing up is inevitably dull, they will always return to the tree house, the flatulent jokes, the crossbows, and the Chewbacca masks.

After seeing Mamma Mia!, which is its own age issues, I can safely assume that some day we will see a musical set in a sun-lit island rest home where frisky baby boomers dance and sing in their 80s. Also, Will Ferrell and John C. Reilly can gurgle, burp, and demand their bottle in their upcoming Step Brothers 2: Tales from the Crib.
Labels: A O Scott John C. Reilly Step Brothers Will Farrell