"Mother Nature is a Serial Killer": A Discussion about World War Z (2013)

In a Chipotle Mexican Grill, I sat down with W, a 22 year old film buff who once took a class in zombie cinema at USC, to discuss World War Z over burritos. We mention some spoilers, so this post is meant for those who have seen the film. 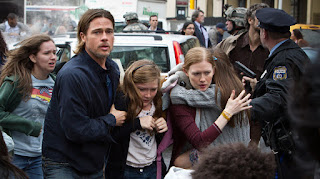 W: It was decent.

W: It enhances the zombie genre with its large budget and global scale. The various action set pieces reminded me of Roland Emmerich's disaster films like Independence Day (1996). WWZ is not as bloated or cliched as 2012 (2009), but the two follow similar paths.

FD: Even though World War Z reminds me of a cinematic Big Mac--readily available for mass consumption--I still like the way it brings up thought-provoking themes. By having the ambition to take zombie conventions to worldwide levels of concern, the movie considers ways to face the human die-off, the threat of martial law, consumerism amidst a breakdown of civil order, Contagion-esque concerns with a pandemic outbreaks, and the loss of individuality in the age of the crowd.

W: That's its problem, I think. With any sort of disaster scenario where people die, these movies can't readily compete with Contagion (2012). WWZ treats zombies like a summer disaster film, whereas Contagion raises those concerns better.

FD: What about the brilliant young scientist who said that "Nature is a serial killer"?

W: What about it?

FD: It doesn't matter if you have a population of reindeer on an island or micro-organisms in a petri dish. When a species uses up its natural resources, it will die off en masse. Nature doesn't care about the individual. So, in that case, to call mother nature a "serial killer" is accurate.

W: Still, that's also a great line in a script. In a movie like Contagion, we get this Rube Goldberg sequence of events with a bat, pig, an Asian cook, and Gwyneth Paltrow that's way cooler than a catchy line about serial killers. WWZ is more effective at city-wide catastrophe set pieces, like how you react to a plane being taken over by zombies, than by answering larger questions.

FD: You seem a bit dismissive about these issues. Director Marc Forster mentioned that he wanted to explore overpopulation and consumerism in the midst of a summer blockbuster. Didn't you like the shopping scene?

W: (chuckles) I did see the overpopulation angle. In these large attacks, you get the sensation that people who are overtaken will join this swarm. Dawn of the Dead (2004) could meditate on consumerism because it was largely set in a mall with zombies milling around because they were familiar with that location. In this movie, it was more like "Oh my God, apocalypse! We've got to raid the grocery store!" It's more a fun thriller scenario as opposed to the gestation of the consumeristic zombification of society. (He laughs)

FD: (laughing) Okay. Next question. How does WWZ fit in the cinematic zombie tradition?

W: WWZ has some cool zombie movie moments. For instance, in the scene where Brad Pitt (Gerry Lane) stands on the ledge of a tall building in case he might convert to a zombie, he shows unusual foresight. In 28 Days Later (2002), Brenden Gleeson gets a drop of blood in his eye, and he says "Get away from me," but doesn't try to kill himself. The characters of WWZ are more self-aware of zombie tropes. Gerry knows to cut off an Israeli soldier's arm to stop the spread of infection, but there isn't a real sense of violence due to the Paramount PG-13 rating. We don't get the same feeling of horrific repercussions. It's not as much of a horror film because zombies aren't feasting on people. They are more like parasites that infect in a wave. That mass movement causes the film to lose sight of the individual zombie who wants to eat you. WWZ compensates, however, with a sense of inevitability-- you can never feel safe.

FD: Couldn't you say the PG-13 rating is used more for leaving the violence up to our imagination, such as in the scene where Gerry uses a crow bar on a zombie, but we don't quite see the blow?

W: There's a catharsis to that violence that's missing, a relief from that oppressive force. We may get more tension as a result. WWZ is better at depicting the chase and the need to hide.

FD: In film class, we talk of way genres go through different phases--primitive, classical, revisionist, or parodic. Where would you place WWZ, given that many zombie films, such as Warm Bodies, are already moving towards the revisionist phase?

W: WWZ is sort of classical, but that's a negative against the film. Night of the Living Dead (1968) and The Walking Dead series deal more with the intimacy of humans trying to survive the apocalyptic event.

FD: But, what of WWZ's constant emphasis on Gerry's family and its survival? 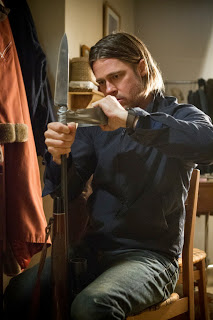 W: That seems like a token attempt to give his character some stakes and depth. We never really learn much of anything about Gerry's character beyond that fact that he's skilled and used to work for the United Nations. We want to see him succeed on a superficial level. We never really get a sense that he will not reunite with his family. Zombie films tend to kill off major characters to piss you off. We know that Gerry is going to live because he's Brad Pitt. Most people don't survive a plane crash that easily. We hope that he will get back to his family, but the movie never really gets intimate about his plight. WWZ doesn't have the kind of balls to mess with that dynamic. When the young brilliant Harvard scientist dies immediately, that's something anyway.

FD: So, you're saying Pitt's movie star persona mucks with the usual vulnerabilities of zombie conventions.

W: You remember the end of Night of the Living Dead? That's powerful because the hero gets unceremoniously shot, and that seems totally plausible.

FD: What did you think of the revised third act of WWZ? It struck me as effective, but also oddly muted, with a goofy emphasis on individual zombies humorously squawking like birds and chomping their teeth.

W: That third act is quiet compared to the rest of the movie, but it works on its own terms. It seems more appropriate to a smaller production.

FD: Do you wish you had seen the original ending with the Lobo-wielding battle scenes?

W: That may have been more viscerally satisfying, but also stupider. That version sounds like just another big gungho action sequence, but it's also more appropriate for the movie's title.

FD: Didn't you find the very end of WWZ pat and easy?

W: Yeah, but most big budget disaster movies tend to be like that.

FD: In other words, you didn't mind how the movie sells out on all of its edgier premises.

W: Sure. It sells out, but the movie never overstays its welcome. It's always well-paced and never dull. It's selling out in an entertaining way, so you aren't minding as much.

FD: Any last observations that we missed?

W: I think the movie opens really strong. I liked the pandemonium of an immediate zombie outbreak. For the first 40 minutes or so, that tension is never relinquished. Otherwise, Gerry could use more anti-hero qualities. He seems to be the most benevolent resourceful guy you'd ever meet. I was hoping that, in the end, when he injects himself with a lethal disease, there would be more telling lethal repercussions. He should have pissed blood, convulsed, or something.

FD: Yes. The movie cheats a bit there. Final thoughts?

W: The zombies in Max Brooks' novel had twitching characteristics, and so did the ones in the movie, but that can't be my final thought.

FD: What do the zombies represent?

FD: (laughing) In what sense?

W: They represent our anxieties of what we will become. In Night of the Living Dead, it was Communism with overtones of racism. In Dawn of the Dead, mindless consumers. 28 Weeks Later reflected the American occupation of Iraq.

FD: Yeah! Zombieland (2009) anticipates The Social Network (2010) and the zombiefication of Mark Zuckerberg.

W: Shaun of the Dead (2004) reflects how we are all pub-dwelling fat lazy videogame playing douchebags.