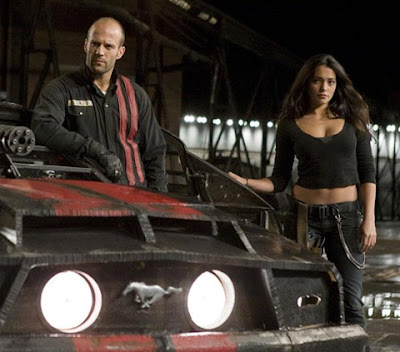 Note: Death Race concerns ace racer Jensen Ames (Jason Statham), a working class yob framed for murdering his wife in the year 2012. Once in the penitentiary, ice queen Warden Hennessy (Joan Allen) offers his freedom if he will play the role of “Frankenstein,” a metal-masked goon in a lethal race loosely patterned after Roger Corman’s Death Race 2000 (1976). While Death Race 2000 had David Carradine and Sylvester Stallone satirically running over pedestrians for points across the , Death Race largely sticks to the racers cruising round and round with dreary testosterone-filled seriousness. Even though a quote from Clueless comes to mind: Finding anything of interest to say about Death Race is “like trying to find meaning in a Pauly Shore movie,” I thought I would try anyway, if only to justify sitting through the 89 minutes of the movie in the midst of my brief vigil on this earth.

1. Director, writer Paul W. made his mark with Shopping (1994), which concerns Jude Law playing a thief who jams his car into storefronts.

2. According to the film, the economy has collapsed by 2012, leaving everyone with nothing to do but watch the “gladiators” of Death Race kill or be killed on the internet. Warden Hennessy points out how at times the race earns millions of hits, no doubt to make bloggers jealous.

3. Compared to the DayGlo colors of Speed Racer, Death Race is filmed in shades of penitential gray, with only occasional splashes of orange (explosions) or red (blood) to offset the visual monotony.

4. Death Race = Hot Rod Magazine + The Road Warrior only less so. I prefer the magazine.

5. For all of the major actors involved, Death Race constitutes an immense backward step in their careers. Jason Statham just starred in The Bank Job, a well-built film in which he actually acts. In Death Race, Statham mostly strains the skin around his bald head until his eyes bulge.

6. Jason Statham has a bunch of tattoos on his body so that the viewer can be reminded of the superior treatment of Viggo Mortenson’s Russian mafia tattoos in Eastern Promises.

7. In her high heels and power outfits, Joan Allen perhaps wishes to channel Meryl Streep’s Miranda Priestley from The Devil Wears Prada, but any fans of her work from the Bourne series will be appalled and saddened by her presence here.

8. Allen has one good scene where she trains a hidden gun under her desk at Jensen’s crotch in case he gets out of hand. These kinds of scenes are extremely rare in Death Race.

10. With his penchant for slow motion shots ogling “navigator” Natalie Martinez in tight jeans, Paul W. S. Anderson reminds me of the advertiser’s cinematic style of . Since portions of the film mimic television sports hype footage (complete with a skull logo and instant replays of deaths), Death Race advertises itself throughout. If a character dies in a particularly colorful way, you get to see it over and over.

11. designs Death Race to very closely resemble a video game, which makes sense since he also directed Resident Evil (2002) and Mortal Kombat (1995). In many ways, especially in terms of how the various tricked out vehicles (a Monster Mustang V8 Fastback!) can spew machine gun fire, napalm, and flames onto their opponents, Death Race resembles arcade racing games, only the arcade games are more fun, and visually more coherent.

12. Death Race gets most confusing during the actual races because likes to use a jerky moving camera style that zooms in and out amidst fast cuts. I found myself waiting for the next pause between stages of the race just so my eyes could focus on something. I very rarely had the sensation of actually watching a race.

13. Given rising gas prices and its picture of a near future of economic collapse, Death Race makes one wonder about how much longer Americans will enjoy their car culture. In The End of Suburbia (2004), out on DVD, and reviewed in The Chutry Experiment, Gregory Greene explores how demand for fossil fuels has already started to outstrip supply. What will Americans do in 2012 when they can no longer afford gas for their beloved cars? Of course, Paul W. S. Anderson does not explore this connection between the collapse of civilization and the lack of gas as George Miller does in The Road Warrior.

14. Death Race does remind one how the prison system is one of the fastest growing businesses in .

15. It seems appropriate that much of Death Race is set in a penitentiary since the viewer feels imprisoned throughout.

Anonymous said…
I only needed one reason to avoid seeing Death Race, but the other fourteen that you added were pretty funny. Thanks for the entertaining list.
August 24, 2008 at 3:30 PM

Anonymous said…
Thanks for the heads up. I was considering going to see this for some reason.
August 24, 2008 at 9:07 PM

Matt Cyganik said…
Haha I'll still end up seeing it this weekend, if only because I have nothing better to do but sneak into films one after another. It helps to desensitize me and appreciate the "good" films. At least thats the excuse I'm going for.

But that doesn't mean I won't hate Death Race I'm sure. And your hilarious commentary only furthers that proof.
August 28, 2008 at 5:39 PM

The Film Doctor said…
Thanks for your comments Chuck, Eric, and Matt. It's strange how pain (aggravation, despair, feelings of imprisonment, etc.) transmutes into humor.
August 29, 2008 at 6:50 AM