How big a deal were the X-Files ten years ago?: The X-Files: Fight the Future 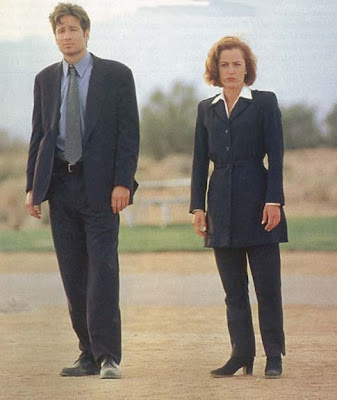 It’s that hazy midsummer time when a young moviegoer’s thoughts lightly turn to paranormal phenomena. In 25,000 BC, down in a torchlit ice tunnel, an apeman stabs an alien only to find his black blood moves around of its own volition much like it does in Species 2.

Cut to modern-day . A band of boys stumbles upon the same cave at the edge of a new housing development. Falling inside, one boy finds a skull and starts to brag about it to his friends. Unfortunately, that same black blood, waiting for new meat all of this time, starts to ooze its way like little worms inside his skin up through his legs and body until his eyes turn black. [Note: the defrocked priest also suffers from blackened eyes in one scene in The X-Files: I Want to Believe.] The boy dies, but still the alien growth feeds on its host, dissolving his bones, turning his flesh into jelly.

So begins The X-Files: Fight the Future, producer Chris Carter’s largely successful attempt to turn his hit Fox show into a summer blockbuster. Very much an old-fashioned blend of Alien and Dragnet, The X-Files has its requisite 4.5 large explosions, expensive sets, and unlikely two-people-against- an-entire-government-agency heroics, but it also has a nicely clinical, subcutaneous sense of menace.

There’s a parallel infection in the bodies of those exposed to the alien virus and in the body politic itself. Filled with morgues, needles, and germ-proof frozen tunnels where men get buried alive for security reasons, the movie has its concomitant government cover-ups, secret agencies, disasters like , and senseless bombings like the one in .

It took me awhile to get used to the idea of FBI heroes, but Mulder and Scully are renegades within a larger organization that’s intent upon whitewashing its own complicity with evil. As one agent says, “Trust no one.”

In the midst of all these layers of infection, David Duchovny (Mulder) and Gillian Anderson (Scully) diagnose various diseases, sift through bones, and chase after white tanker trucks. As those familiar with the TV show already know, Mulder, the intuitive impulsive one, tends to underact, but here he makes fun of his expressionless pretty boy style. Scully, the scientific objective one, appeals to geeks everywhere because she talks like a nerd. Infected by the virus, she rattles off a bunch of her symptoms dispassionately as she passes out on the floor (“loss of motor control, constriction in the back of the throat,” etc.) . She also dresses like a 1950s Hitchcock heroine in prim dark suits. Scully’s red hair might get a little mussed and her white shirt a little disheveled as she runs from attack helicopters in the night, but she seems more comfortable with a microscope or an autopsy than with a gun or a love interest.

Both Scully and Mulder are weary of their thankless hushed-up researches week in and week out on TV. Scully would like to quit except for the pesky possibility that this last case may determine the fate of all humanity.

The film gets more derivative towards the end, with director Rob Bowman perhaps feeling market pressure to wow the popcorn-crunching crowd with a fancier, more spectacular set. Sadly, Scully becomes a maiden in distress yet again, and this violates the balance between the two leads established earlier. Duchovny by himself comes off as a blank hunk, the kind of fellow that might star in The Red Shoe Diaries. He needs ’s quiet intensity to bounce off of.

Still, for those who like their vision of government-complicity-with-the-aliens neat and their conspiracies well-stirred, The X-Files serves up apocalyptic dread with style. You can even find Mulder and Scully on the cover of Newsweek. Is that because of the quality of the movie warrants it, or does the same parent corporation own both the magazine and Twentieth Century Fox? As they say, “Trust no one.”

Labels: The X-Files: Fight the Future

Interesting, I never really thought that Scully talked like a nerd. Everyone around me talks that way ...
August 6, 2008 at 6:36 AM