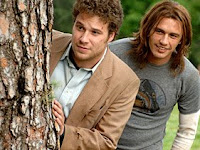 Pineapple Express impressed me in three ways: 1) as a piece of pro-marijuana propaganda that reflects recent changes in California’s drug laws, 2) as another example of Judd Apatow’s and Seth Rogan’s skills in comedy screenwriting, and 3) as a good reason for Apatow to never produce another action film.

I was surprised by the virulence of the film’s pro-marijuana ideological slant. It begins back in the 1930s in black and white with two men descending into a bunker hidden underneath a field. Down below, they come upon a young soldier cheerfully smoking dope under observation. Officers try to ask him questions about the symptoms, but the soldier keeps humming songs and goofing off until a disgusted Colonel Klink-like heavy with an eye-patch loudly pronounces marijuana “ILLEGAL” before the film cuts to a contemporary Dale Denton (Seth Rogan) cheerfully puffing away as he drives through LA. When Dale meets up with his dealer Saul (James Franco) to buy some pineapple express, a designer herb that smells like “God’s vagina,” the film revels in their silly stoned repartee.

With curiously good timing, the July 28th issue of The New Yorker featured an article by David Samuels about the blossoming pot industry in . Back in 1996, California voters passed a referendum called Proposition 215 that legalized marijuana growth and sales for medical reasons. Now, pot has become ’s leading cash crop, earning more than corn. Samuel’s essay details the various ways in which Californians get doctors to sign recommendations that allow them to smoke. Anxiety, nausea, and depression often work, and Samuels includes lots of colorful portraits of Tibetan prayer flag-waving aging hippie dealers growing designer ganja with names like Purple Urkel, Sour Diesel, Bubba Kush, and L.A. Confidential. Perhaps this culture could explain Pineapple Express’s strong pro-marijuana slant. There’s even a scene in the film where Dale gets busted by a policewoman for dealing. When she’s frisking him, he uses the excuse that he’s smoking for medical reasons in his attempt to go free.

By the last third of the film, screenwriters Rogan and Apatow throw in enough Asian drug dealers, corrupt cops (including, sadly, Rosie Perez), and pistol-packing action scenes to parody last year’s War. As the main drug lord Ted Jones, Cole mostly stands around making generic villainous gestures like cursing out Asian drug lords on the phone. Pineapple Express succeeds much better with its willingness to win over the audience with charm. James Franco’s disarmingly sweet grinning performance reminded me of Sean Penn’s seminal work as Jeff Spicoli in Fast Times at Ridgemont High (1982). Franco gets to show more range than he did as the perpetually annoying Harry Osburn trying to avenge his father’s murder in the Spiderman series. In his turn, Seth Rogan has a teddy bear delinquent appeal. He’s the schlub of the new millennium, and he comes off as more articulate and intelligent than Adam Sandler or Will Ferrell.

So, if you happen to see the film, watch for signs of a new marijuana culture in the making. When it isn’t reverting to B movie shoot-outs, Pineapple Express sometimes attains a blissed-out karma that would make Cheech and Chong proud.