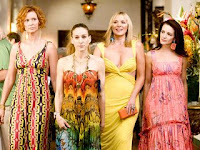 Now that school’s back in session, how was the 2008 summer box office? With domestic ticket sales reaching $3.9 billion, the film industry ended up earning slightly more than last year. For a recap, check out Rebecca Winters Keegan’s article in Time, where she characterizes the season as “good, not great,” with The Dark Knight grossing an unsurprisingly large percentage of the haul. Writing for Variety, Dave McNary claims that Mamma Mia!, Kung Fu Panda, and Sex and the City all “dazzled” in foreign markets, but overall the international box office did not do quite as well as last year. Writing for Los Angeles Times, John Horn ranks the major studios and finds that and Warner Brothers outperformed the rest, while Fox produced the most flops. Horn also notes that in spite of all the hype, “quality,” of all things, and good critical response determined the success of many of the films. Writing for Wired, Hugh Hart discusses how superheroes and Indiana Jones dominated the season, and how there are many more to come. New York Times critic, A. O. Scott may not be thrilled by that. Lastly Get the Big Picture ranks the top ten films of the summer and the top seven bombs.

bd said…
Nice wrap-up. For me, it was indeed a strange summer for film. I only saw one or two movies, but then as a 47 year-old WASP, Hollywood isn't exactly targeting my demographic.

I find it interesting that so many critics and bloggers are focusing on revenue and profits. The financial facet of a release seems most interesting to the movie industry and stockholders... as a moviegoer, I rely more on assessments of the movie's entertainment qualities. Whether or not a movie is a blockbuster isn't relevant to my determination to watch it. In fact, when I hear that word, I think of crowded, stuffy, and noisy theaters. Many everyday moviegoers are impressed by the financial performance of a movie. On ET, they hear that Dark Knight edges out its competition and they factor that into their buying decision. And yet product profitability is not relevant to their choice of deodorant or cat food. More to the point, it doesn't matter when they buy a book or choose a TV show to watch.

It seems odd that the everyman should give a rip about how a movie rewards its creators financially. Is profitability an endorsement of a film's quality? Speed Racer gives us a clue.

I admit that I have a tendency to avoid movies wearing the bling-term blockbuster: I rather enjoyed watching Mamma Mia! in a nearly deserted theater, surrounded by rapt middle aged soccer moms who didn't care whether or not the flick made a single red cent.
August 30, 2008 at 7:34 AM

The Film Doctor said…
I know what you mean, jus, but there can still be a grim fascination in noting how Step Brothers quietly made close to 100 million dollars while other (one would think) far worthier films hardly made anything. Also, this summer proved the profitability of women's films like Sex and the City when most movies are designed for adolescent guys. So sometimes looking at the box office numbers can yield insights in a crass American materialistic way.
August 31, 2008 at 2:59 PM