Babylon A. D. and Children of Men: an 8 point comparison 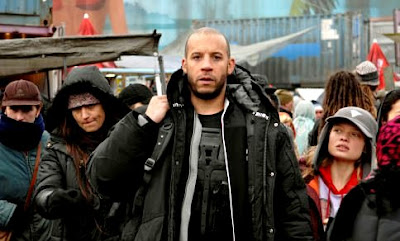 Now that the French director of Babylon A. D. Matthew Kassovitz has condemned his own work, blaming Fox’s studio intervention for the inferior product, many have gleefully starting savaging the movie. Yesterday, I saw one post already claiming that Babylon A. D. is the worst science fiction film ever made. Having seen the movie, I can safely say that there are worse, including last week’s Death Race. Babylon A. D. is badly flawed, but it keeps hinting at good intentions that went awry, and it suffers from the many comparisons it invites to Children of Men and Blade Runner. Ironically, I enjoyed because I could spend so much time spotting the influences of other better films.

Babylon A.D. was adapted from a 2001 French science fiction novel entitled Babylon Babies by Maurice G. Dantec, in which Bosnian veteran Cornelius Toorop escorts Marie Zorn from Kazakhstan to Montreal in 2013. Dantec imagines a future dominated by the complications of genetic experimentation, so Toorop has to deal with cyborgs, drug experiments, cloning, and a large artificial biosphere program when he’s not setting off grenades and defending himself against enemies.

In the movie version, much of the genetic subtext falls away, and the viewer is greeted with Vin Diesel (Toorop) strutting around a grungy slum to a rap song as various thugs threaten him with guns. When a bunch of soldiers busts into his apartment, Toorop coolly asks “Karl, is that you?” before allowing himself to be escorted to a tank where Gerard Depardieu waits inside with a big prosthetic scar on his face, augmenting his already large nose. Anyway, here’s a point by point comparison between Babylon A. D. and Children of Men:

1. Children of Men takes as its premise the fact that at some point mankind stopped reproducing. Everything in the story gains urgency due to this central problem, especially Theo’s need to get pregnant Kee to safety. She represents mankind’s last hope for renewal. Babylon A. D. depicts a very similar future in which something vague is going on concerning genetics, but there’s no central conceit to focus the action. Toorop, like Theo, still must escort across hostile terrain.

2. In Children of Men, Kee (Clare-Hope Ashitey), a handsome African-British woman, spends much of the movie deciding on the name for her baby. In , Kee’s equivalent Aurora (Melanie Thierry) looks like a younger Michelle Pfeiffer. She has psychic powers, the ability to mentally stop missiles from hitting her when they fly within inches of her head, and she seems to have learned 39 languages by the age of 2. also has an awkward tendency to say things like “We will all die in ” just when she, Toorop, and Rebeka start to bond as a family.

3. In both films, the young woman has an older female helper, a kind of female Virgil to guide her through her respective futuristic Inferno. Kee gets some frumpy middle-aged woman with dreadlocks. Lucky has Michelle Yeoh (of Crouching Tiger, Hidden Dragon), who plays Sister Rebeka, a nun who can fight kung fu style when needed.

4. Children of Men keeps emphasizing how has a major refugee problem where they are routinely rounded up, placed in cages, and transported to camps where they are tortured. A. D. has one refugee scene where a large crowd has difficulty fitting into a submarine. Some get crushed underneath the ice and feels their pain.

5. Children of Men plays with the complacencies of its audience by inserting terrorist kidnappings, bombings, and Abu Ghraib-like activities in . In effect, the movie continually assaults the viewer when he or she expects bucolic nature scenes or a casual bus ride. A. D. has some guys throwing rocks at Toorop in a car, and thugs waving guns around, but they don’t seem as coherently menacing.

6. Children moves toward a grim refugee camp where Theo and Kee try to survive a major battle scene. In contrast, travels toward a with 22.7 million people where the skyline looks much like the one in Blade Runner. In , a High Priestess (Charlotte Rampling) has her image moving around on screens and skyscrapers everywhere. I happen to like Rampling, but she wears lots of white pancake makeup that reminded me of Heath Ledger’s Joker. As she throws tantrums in front of her underlings, she has awkward lines like “I designed her! She is my miracle!” and so on.

7. Theo is a drab (but handsome) bureaucrat who can’t find any decent shoes, so he's obliged to perform some of his heroics in flip flops. Toorop is one tough dude with an Abercrombie and Fitch build and lots of tattoos. Vin Diesel conveys world-weary macho cool to the point where he hardly speaks, and when he does, he slurs things like “Life is simple. Kill or be killed.” I would imagine that he aspires to the level of Bruce Willis as an action star, but he often reminded me of a young Sylvester Stallone with an odd hint of Adam Sandler, perhaps due to his accent.

Anonymous said…
the previews for Babylon AD made me expect something a lot more original... did you also notice how much it resembled Minority Report (cinematography) and the Fifth Element (Russian girl who can learn fast who just happens to know kung-fu at the end) ?
September 2, 2008 at 7:26 AM

The Film Doctor said…
I didn't notice the similarity to Minority Report. Babylon AD's cinematography did not strike me as unified at all, whereas Children of Men has a remarkably consistent and original cinematography using grunge colors. Someone should write at length about the mise en scene of Children of Men and its use of collages and graffiti.

Good point about Leeloo in The Fifth Element. She does resemble Aurora in some ways. It's too bad that Kassovitz did not try to emulate The Fifth Element's slightly campy style.
September 2, 2008 at 7:48 AM