Boys with toys: notes on G. I. Joe: The Rise of Cobra 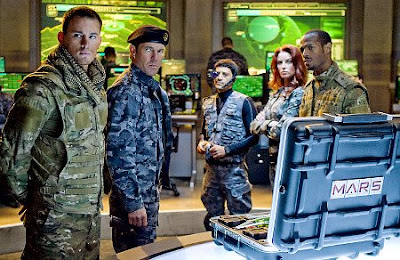 1) No one forced me to go. There I was, buying tickets at the Grand 14 cineplex at Market Commons in Myrtle Beach, and instead of entering the theater, I tried to walk away, past the Coldwater Creek, the Barnes & Noble, and the Anthropologie store. I listened to a few snippets of a canned Billy Joel song blasted out of a speaker hidden in a bush by the sidewalk. I tried to reason with the younger fellow with me as we passed the prefab "beautifully designed village setting": "Our lives are very short. Shouldn't we spend the next two hours doing something other than watching G. I. Joe? We could go see A Perfect Getaway instead. We could go stand in that field," I said, pointing. Ultimately, we turned back. Yet, even in the cineplex, I still had a hard time actually entering the theater, so I lingered out in the lobby and stared at the Shutter Island poster. 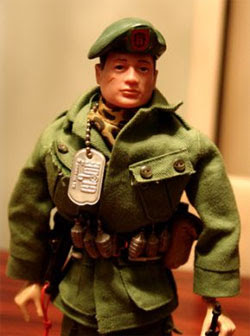 2) Much like Transformers 2, G. I. Joe: The Rise of Cobra exists to market a line of Hasbro toys. In this case, the "Joes" are an elite corp of fancy soldiers who hang out in the "Pit," an underground bunker in the Egyptian desert near the pyramids. These soldiers are led by General Hawk (Dennis Quaid), which elicited this conversation with my fellow viewer:
"I hated to see so many good actors sell out, such as Dennis Quaid."
"Dennis Quaid sold out a long time ago."
"True."
3) After an extended firefight in the woods at night, a top secret band of evil bad-ass leather-clad soldiers steal some warheads from a military convoy. One member of this band is the Baroness (Sienna Miller), an evil variation of a formally sweet blond "Ana," whom we learn about via flashbacks. The Baroness looks like this: 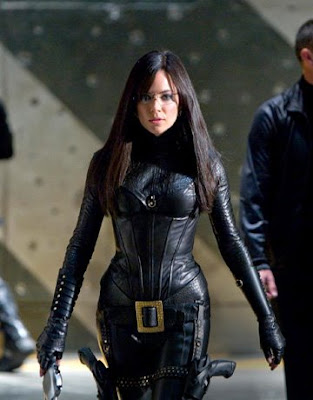 In her evil form, Miller's character sort of resembles Sarah Palin, which I thought was funny and somehow appropriate.
4) Anyway, G. I. Joe mostly consists of a compendium of science fiction/military blockbuster-wannabe cliches. At times, I was strongly reminded of Armageddon, Star Wars, Bond films, and The Fifth Element, but director Stephen Sommers shot G. I. Joe in a very grainy, fuzzy, difficult to decipher, and cheap CGI style, with granular special effects much like the ones used in The Day the Earth Stood Still. That's my chief gripe about the film. The Fifth Element pays the same slavish attention to sci-fi formulae, but at least it has much visual flair to make it more engaging. G. I. Joe looks like it was slapped together under a tight Paramount deadline. Much as Sommers fails to prepare the viewer for the next scene, he tends to eschew establishing shots in favor of plunging the hapless spectator into a battle with too many close-ups and a jiggly camera that assaults one's desire to focus. What are some of the cliches he uses over and over?

a) The strut. In the tradition of The Right Stuff, characters often strut towards or away from the camera when not fighting. Standing around talking does not happen often, unless the scene immediately cuts to the same characters from a window where an outdoor panning shot shows the immensity of the evil cobra lair, or whatever. Sometimes you get an entire group strut which will include someone quipping an ironic self-congratulatory crack like "We look good!"
b) Machine gun fire through glass, a frequently used device. I believe the entire Pompidou Center in Paris gets riddled by the Baroness' bullets. 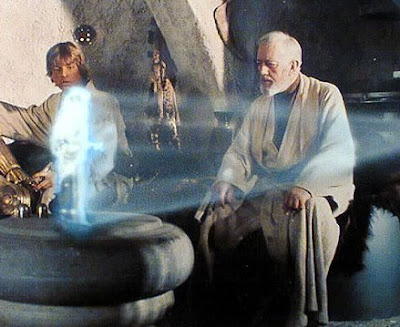 c) The hologram. Sommers gets hologram-happy early on when about four characters keep appearing and reappearing in this form. I guess this makes the film more high tech and impressive. Also hologram characters can walk through other characters in a ghostly fashion.
d) Blowing up the evil lair compound. This device has become more than trite with extensive repetition, but Sommers does include a sword fight between two ninjas in the midst of the destruction of one evil military base under a polar ice cap, a scene that reminded me of the light saber fight between Luke and Darth Vader in The Empire Strikes Back.
e) Bad guys wear elaborate metallic masks and a lot of scar tissue to convey their twisted nerdy vengeful agendas, such as using warheads to "strike fear into the heart of every man, woman, and child," as the former Doctor Who Christopher Eccleston says at one point (he plays the evil arms merchant McCullen). Speaking of actors who sold their souls, I noticed that Joseph Gordon-Levitt plays the Doctor, a guy with something like a metallic oxygen mask over his mouth and a monocle (!) no less. He favors large machines with many needles that menace the faces of innocent Joes. One can find a similar machine in X-Men Origins: Wolverine.
5). There are many more cliches, including scenes where a mass of soldiers back at the base shout "Yeah!" and pump their fists in the air to convey football fever triumph after a victory, the obligatory video game-simulated training scene, the cut to the president looking concerned (in this case Jonathan Pryce who clearly looks as if he would prefer to be in another movie), the dog fight either in the air or underwater which requires a last-second lunge to get through a contracting circular exit, and the last-second jet-propelled flight out of a fireball. Let's not even get into the verbal cliches: "There are still a lot of Joes out there in harm's way," "Houston, we have a problem," "What have you done to me?" Now, you die," "You and what army?" etc. 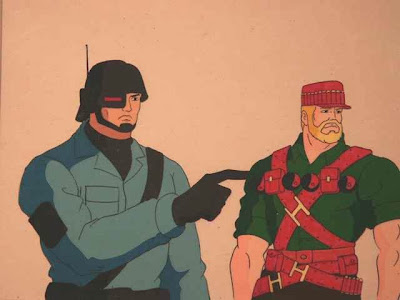 6) Now I understand that much of the material from this movie was taken from a cheaply made Saturday morning cartoon series made in 1985 and entitled G. I. Joe: A Real American Hero. And one can always laugh along at all of the exaggerated conventions, admire the cleavage-revealing leather bodysuits on the female Joes that reminded me of Emma Peel, and somehow take pleasure in visual crudities on display, but I find such irony increasingly difficult to stomach as the summer wears on. How much do we let irony forgive incompetence? Is there a limit to all of this knowing winking at another rehashed orgy of macho tropes? While the women can enjoy Julie & Julia, the guys get this juvenile posturing that attempts to supply the pleasure one might get from repeatedly crashing one's toy trains.
Labels: G. I. Joe: The Rise of Cobra

I love this - "guys get this juvenile posturing that attempts to supply the pleasure one might get from repeatedly crashing one's toy trains." Guys are strange. There's no denying some sort of need to "crash one's toy trains."

You were good to that "younger fellow" with you. Tomorrow I take my daughter to see Julie & Julia and then later I hope to slip out and see Milla Jovovich in The Perfect Getaway.
August 8, 2009 at 8:47 PM

The Film Doctor said…
Thanks, Hokahey. I guess I could have written something of the movie's better points, such as the Eiffel tower crashing scene that pleased British critics, and the flirtation between Scarlett and Ripcord, but I found thinking of G.I. Joe a wearisome business. This film will date the fastest and become the Armageddon or the Ultraviolet of our time.
August 9, 2009 at 10:08 AM

As a kid who watched the cartoon TV series in the morning before school, I should be in G.I. Joe's target audience. And, truth be told, I would be if the trailers had done anything -- and I mean anything -- to tickle my nostalgia.

The cartoon worked as a kind of ensemble piece for human superheroes. Each character had his/her own very distinct personality, like professional wrestlers. In the trailer for this film, other than recognizing Snake Eyes (the black-clad ninja), I saw none of that. Even more mystifying to me were those Robocop-type suits that, so far as I can tell, render each Joe exactly the same. Where's the fun in that?

Over the past few hours I've looked in horror at headlines about the opening weekend box that almost assure a sequel. Then again, if a sequel looked like it might capture some of the spirit of the cartoon, I'd give it a look. I wouldn't expect much, but I'd go. Which is more than I can say for this first effort.
August 9, 2009 at 2:57 PM

The Film Doctor said…
Thanks, Jason. You made the right decision to not go. I'm still recuperating from the eye strain.
August 10, 2009 at 10:33 AM