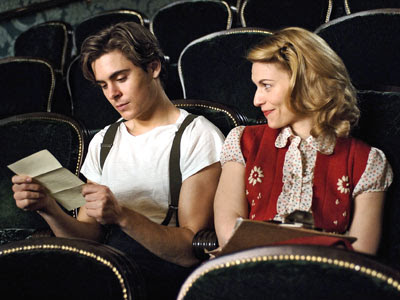 "To play yourself—your true self—is the hardest thing in the world. Watch people at a party. They're playing themselves…but nine out of ten times the image they adopt for themselves is the wrong one.

"In my earlier career I patterned myself on a combination of Englishmen—AE Matthews, Noel Coward, and Jack Buchanan, who impressed me as a character actor. He always looked so natural. I tried to copy men I thought were sophisticated and well dressed like Douglas Fairbanks or Cole Porter. And Freddie Lonsdale, the British playwright, always had an engaging answer for everything.

"I cultivated raising one eyebrow and tried to imitate those who put their hands in their pockets with a certain amount of ease and nonchalance. But at times, when I put my hand in my trouser pocket with what I imagined was great elegance, I couldn't get the blinking thing out again because it dripped from nervous perspiration!"
---The Film Freak Central Blog treats us to a video studying the camera techniques of Mad Men.
---I don't know if I agree with this post at all, but it shows how Lady Gaga provokes in a style worthy of Madonna.
---Stephanie Zacharek explicates a key scene in Sofia Coppola's Lost in Translation.
---Poor Conde Nast.
---Trailer reactions: The Fourth Kind looks manipulative; linking Zac Efron and Orson Welles makes my brain hurt; apocalyptic Legion has Paul Bettany (who I liked in Wimbledon), a Satanic granny, and lots of special effects-laden doom, but I wonder whether including angels with wings (in fight scenes?) is a good idea; Did You Hear About the Morgans takes a city couple and plunges them into cow country, the exact same plot as Hannah Montana; Sin Nombre intrigues; Law Abiding Citizen looks generic but has a fun premise.
---What were the real Mad Women like?
---Om Malik discusses "The Evolution of Blogging":
"Blogging needs to be social. There are many reasons for this, but the most important one — in my mind — is the changing nature of content. “We will all be streaming life moments as more and more bandwidth is available both at home and on the go,” I wrote two years ago. It’s already happening. Today most of us walk around with newfangled smartphones that are nothing short of multitasking computers, essentially content creation points. And they’re networked, which means creating and sharing content is becoming absurdly simple to do. With the increased number of content creation points –- phones, camera, Flip video cameras, Twitter -– we are publishing more and more content.Most of this content is disjointed, like random atoms. In the past, I (and others) have referred to this as the atomization of content. These atoms need to be brought together in order to make sense. But while many have argued that self-hosted Facebook- or FriendFeed-styled services could fill this role, I disagree. As I’ve said in the past, “We have two choices in order to consolidate these — either opt for all-purpose services such as Facebook (as tens of millions have done) or use our blogs as the aggregation point or hub for all these various services.”
---With Dogme 09.8, Jim Emerson considers "Ten limitations for better movies." As they say, get a tripod!
---Darrell and Doug Waters show how to make an impressive short film with minimal funds.
---Lastly, which Bond will win?
Labels: Notable film and media links