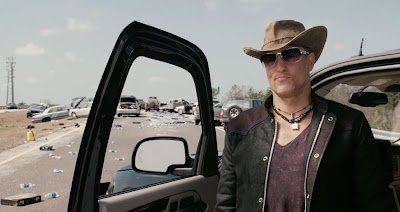 ---Paul Harris of The Guardian attempts to understand our love of apocalyptic movies:
". . . experts say the trend towards apocalyptic thought does not only reflect anxiety over a difficult period of history but, just as important, changing times. Indeed it is often the concept of change as much as the concept of destruction that triggers popular interest in apocalyptic themes, according to Professor Barry Brummett of the University of Texas at Austin. Brummett notes that the first world war produced more apocalyptic popular culture than the second world war, despite the latter being on a much bigger and more destructive scale. "The key thing was that the first world war was new and different. That's why it triggered more apocalyptic thought," Brummett said.

In this interpretation it is the fact that the world seems to be changing so quickly that is triggering apocalyptic themes in our culture. The advent of a new internet-based economy, the rise of China, new ways of fighting wars, changing demographics, growing environmentalism and even the election of America's first black president all add up to a wave of huge change."

---In the same vein, Slate considers "different scenarios for America's downfall," and Woody Harrelson demonstrates how to kill zombies with a bowling ball.

---A. O. Scott introduces us to A Streetcar Named Desire: "What attracts us more--beauty or brutality?"

---Craig of The Man from Porlock explains how Goldie Hawn interfered with the otherwise promising Swing Shift (1984), directed by Jonathan Demme:

"But you couldn't leave well enough alone, Goldie. By all accounts, during pre-release screenings, you (and the studio) got nervous at Demme's politics, which reportedly takes a critical view of how women were exploited for manual labor and then abruptly dismissed once the war ended (not exactly Reagan Era material), and took umbrage at his characteristically inclusive ensemble approach. (Your producing partner complained that you came across as a `blonde extra' rather than the star.) Most of all, you panicked at the implications of Kay's infidelity, that your fan-base might reject your portrayal of such a character. So you removed or re-jiggered some of the original scenes and added new ones."
---For The New York Times, Brad Stone shows how much technology has taken over our free time:
“Things that I thought were unacceptable a few years ago are now commonplace in my house,” she said, “like all four of us starting the day on four computers in four separate rooms.”

Technology has shaken up plenty of life’s routines, but for many people it has completely altered the once predictable rituals at the start of the day.

This is morning in America in the Internet age. After six to eight hours of network deprivation — also known as sleep — people are increasingly waking up and lunging for cellphones and laptops, sometimes even before swinging their legs to the floor and tending to more biologically urgent activities.

“It used to be you woke up, went to the bathroom, maybe brushed your teeth and picked up the newspaper,” said Naomi S. Baron, a professor of linguistics at American University, who has written about technology’s push into everyday life. “But what we do first now has changed dramatically. I’ll be the first to admit: the first thing I do is check my e-mail.”

---Slate's creepy mixtape of Meryl Streep's accents.
---Scott Kirsner of Cinematech compares authentic with inauthentic videos.
---Two trains collide.
---Instant reactions to trailers: Uwe Boll returns to responsible ethical filmmaking with Rampage; Dead Snow looks crude; New York, I Love You could be great (to judge by Paris, j'etaime), but the trailer seems too sweet; It's Complicated (Streep overkill?); The Imaginarium of Doctor Parnassus (general overkill?); I wonder about the schmaltzy computer-generated afterlife in The Lovely Bones.
--With the help of YouTube, Lauren Luke redefines the media star and poses "a challenge to a multibillion-dollar cosmetics industry."
---Mike D'Angelo examines the "meet-hot" scene of Double Indemnity.
---Lastly, proper therapy after suffering through G. I. Joe: The Rise of Cobra.
Labels: Notable film and media links

Richard Bellamy said…
Thanks for the links - especially the one on apocalyptic movies.

My love for apocalyptic literature and film has nothing to do with recent anxiety or changes. I've loved it since I was little - in the 60s you had all those old 50s sci-fi movies on TV and movies like Earthquake in theaters. Then I discovered books like Earth Abides, On the Beach, and Alas, Babylon. I look forward to The Road and 2012 in theaters. My fascination is with seeing destruction and observing how people act in time of crisis; and I always conjecture how I would survive. After reading all those books, I know some tricks!

The Film Doctor said…
I agree. Apocalyptic storylines give one the satisfaction of seeing the social order destroyed, all of private property reduced to one big freewheeling grabfest amongst the wreckage, the end of everydayness and routine, and the fun of seeing our overpopulated planet shake off most of an annoying species. Biologically, we are due a die off, and I like to look around for signs of doom. There's seems to plenty of them: high-fructose corn syrup, Crocs, SUVs, reality TV, Transformers 2, etc.

The Lovely Bones also has some regrettable casting: Mark Wahlberg? I've seen too much of the actors already.
August 12, 2009 at 1:55 PM