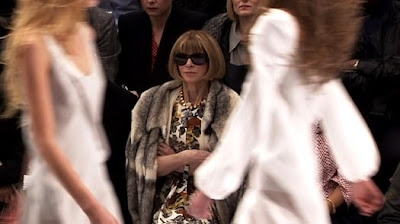 ---Interview with R. J. Cutler, director of The September Issue:
I was sitting there thinking, "The handful of people in that room are deciding what's going to be sold throughout the fall season.""Right there, they're deciding what people will wear. That's what they do. You know, when the minister of finance for Louis XIV convinced him that France should become a major exporter of fashion, that it should be one of the leading industries, he appointed a minister of fashion. And that minister of fashion would decide where the hemlines were and what the fashion in the court would be, every year. That decision affected the world's fashion because it was exported from France to the rest of the world. This is what Anna is doing! She's sitting there as minister of fashion of the world, with her associates, and declaring what we shall wear." Also, behind the scenes of The September Issue.
---The original short film by Shane Acker that inspired 9.
---Imomus defines the 00s decade:
"Other things that looked dead or dying this decade: I personally stopped going to the cinema. Why sit behind someone's head in a fleapit when you can download all you need to see and project it at home? Copyright effectively died, overtaken, de facto, by events on the internet. Magazines and newspapers ended the decade looking very unhealthy indeed, although books seemed strong. Young people got a lot less interested in cars, leading some to label Japan a post-car society. Detroit pretty much collapsed. The polar ice caps melted rapidly; climate change is a fact. Banks -- having invented what they thought were clever ways to spread risk around, and play with planet-sized sums of entirely fictional money -- looked pretty shaky. As a result of the financial crisis, some declared the thirty-year neo-liberal project to privatize, incentivize and globalize over. Nicolas Bourriaud declared postmodernism dead, replaced by something he called the Altermodern. Attacks in the British press helped to make it a self-fulfilling prophecy."
---Mediaweek imagines 2014--the future of media:
"The internet will become the glue that holds all the other media channels together.Ed Stivala, managing director at N3W Media, says: "Over the next five years, the internet will become a utility in our lives, in the same way that you purchase water and power."Stivala imagines a future where your alarm clock will wake you according to how congested the roads are for your commute to work, and your car automatically maps out fuel stops. He adds: "Your virtual diary will keep track of your shopping list and whether you are planning to watch any cookery TV programming that week. You will no longer need to think about when you need to visit the supermarket, because your virtual diary will schedule it."The internet will also become a moveable feast, increasingly accessed on the go. Google's Howe believes this means voice search will become "significantly more prevalent". He says: "We're testing it now. You search via voice into a smartphone and you get the results by voice, text or image. Users will be able to ask a question into their mobile and we will provide the most relevant answer, depending on what the algorithm says."
---Tama Leaver considers the future of journalism.
---Michael Erard's "Short Manifesto on the Future of Attention"
---"Best science visualization videos of 2009"
---A thought-provoking video about the social media revolution (with thanks to The Chutry Experiment).
---Edward Cone's "Blogger's Lament": "As David Weinberger, the author, blogger and philosopher of the Internet age, has said, on the Web everyone will be famous for 15 people."
---I like the way zombies are being considered by scientists and specialists in international politics. Why not be a zombie as a good career move?
---VW explains why it is time to follow the dude.
---Lastly, Stephen Marche wonders--"Why are you working so hard?" Why indeed?
Labels: Notable film and media links

Itsolusenz said…
Hi! Your blog is simply super. you have create a differentiate. Thanks for the sharing this website. it is very useful professional knowledge. Great idea you know about company background. Customized application development
September 15, 2009 at 8:14 AM