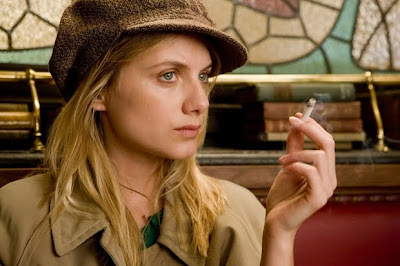 ---The dangers of internet addiction:

"If humans are seeking machines, we've now created the perfect machines to allow us to seek endlessly. This perhaps should make us cautious. In Animals in Translation, Temple Grandin writes of driving two indoor cats crazy by flicking a laser pointer around the room. They wouldn't stop stalking and pouncing on this ungraspable dot of light—their dopamine system pumping. She writes that no wild cat would indulge in such useless behavior: "A cat wants to catch the mouse, not chase it in circles forever." She says "mindless chasing" makes an animal less likely to meet its real needs "because it short-circuits intelligent stalking behavior." As we chase after flickering bits of information, it's a salutary warning." Also, more on information addiction.
---One possible result of that addiction? According to Anthony E. Zuiker, "Our attention span is getting shorter and shorter and it is killing the traditional formats."
---Christopher Hitchens looks at The Baader Meinhof Complex:

"The Baader Meinhof Complex, like the excellent book by Stefan Aust on which it is based, is highly acute in its portrayal of the way in which mania feeds upon itself and becomes hysterical. More arrests mean that more hostages must be taken, often in concert with international hijackers, so that ever more exorbitant “demands” can be made. This requires money, which in turn demands more robbery and extortion. If there are doubts or disagreements within the organization, these can always be attributed to betrayal or cowardice, resulting in mini-purges and micro-lynchings within the gang itself."
---My favorite new video game.
---Tarantino has arrived with his profile in The Atlantic.
---Heather MacDonald explains how Foucault has gotten so passe if one looks at today's prisons:
"Such surveillance, said Foucault in Discipline and Punish, turns inmates into powerless subjects of the “disciplinary” state. Foucault called jails and prisons “Panopticons,” after a circular prison model by eighteenth-century philosopher Jeremy Bentham that let guards observe a large number of inmates from a central position.

But jails and prisons are also reverse Panopticons; to walk around one is to be under constant observation from the inmates. The moment that Deputy Warden Thomas Hall enters another Rikers punitive segregation unit, inmates watching from their cells unleash a torrent of obscenities: “ . . . Hall!” “Call Hall!” While the authorities’ surveillance of inmates is often protective—as in the ubiquitous suicide watches—the inmates’ surveillance of the authorities can be aimed at corrupting them. Like surveillance, power in jails flows between officers and inmates in multiple directions."

---Meanwhile Wired wonders how to escape the surveillance of everyday life.

---Vadim Risov looks at the new puritanism--R-ratings for smoking in movies.

---Gentlemen Broncos looks promising, When in Rome less so.

"You know, in the old days it was very difficult to make movies 'cause you had to have 35 millimeter cameras, which were phenomenally expensive. Or you had to have rich parents that could send you to film school. Nowadays, anybody, any kid or young person with a desire to make films ... (has) access to this equipment. You have great video cameras and the quality's fantastic. You can make soundtracks and do visual effects. You can do very competent computer effects quite easily."

..."There are no excuses anymore. If people really want to make movies, they can go out and do it. And I think we're going see in the next 20 or 30 years a real influx of creativity to the world of entertainment because I believe a lot in the young generation coming along ... the pop culture generation who now can grab these cameras and go make films with them."
Labels: Notable film and media links

Joel Bocko said…
For once, I'm on the same page as Peter Jackson. I think this has been a crappy decade for film, but we may be on the cusp of a major transformation, if people take advantage of the opportunity.
August 24, 2009 at 4:58 PM

The Film Doctor said…
I agree, Movieman. The technology is there. I notice much interest in my students for video production.
August 25, 2009 at 6:49 PM