America, the weird: notes on The Hitchhiking Movie

What would it be like to hitchhike across the country from New York City to Los Angeles in a week? In The Hitchhiking Movie, Philip Hullquist and Ryan Jeanes decided to find out in 2007. While I had my doubts about this low-budget documentary that Hullquist sent to me in DVD form, the results are compelling, in part because the two men decided to try not to spend any money in this Kerouac-esque venture, and because the resulting journey develops a deranged fascination. The film begins with various people in New York predicting that the two guys will be assaulted, kidnapped, and murdered. Ryan carries a backpack with basic supplies, and Hullquist (who mostly does not appear in the movie) carries his camera equipment, but otherwise they remain at the mercy of freeways, truck stops, and a steady stream of people in vehicles who usually prefer to not pick up hitchhikers. One woman who supplies a ride, for instance, says she figured that "the two guys were trustworthy because [she] saw one of them carrying a camera, unless, of course, they planned on filming her murder."
With its playful editing, crude cinematography, typed-in inserts consisting of data about states, murky night photography, thought-balloons, flash-forwards, problems with sound, and so on, the movie can get a little too eager to please, but Ryan humorously grouses about his frequent inability to get a ride. I was intrigued by the grim nature of their voyage much of the time. Ryan and Phillip are too much in a rush to dwell on much local scenery, and often the highways look the same. Instead of picking up the hitchhikers, people would frequently honk as they drove by, so Ryan speculates that perhaps this means that they would like to stop, but they won't, but they want to establish some rapport anyway. Ryan and Phillip endure extended visits to truck stops (usually late at night) where Ryan wanders around asking one trucker after another for a ride. 99% say no either because the company they work for will not allow it, or because the two travellers would add too much weight. At other times, the two fellows find themselves stranded in the heat for hours, pulled over by the police for illegally hitching on the highway, or obliged to sleep at a nearby park full of mosquitos. In the course of the week, they get precious little sleep. 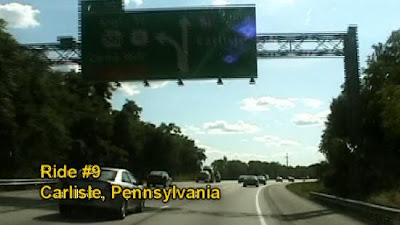 Ryan and Phillip's travels yield a quirky supporting cast of random drivers. One part-native American trucker named Fred drives them from Pennsylvania to Kentucky with a peace pipe on his dashboard. Fred pontificates at length about life's choices, drug dealers who wanted to use his truck for smuggling, and the holocaust of Native Americans. One "psychiatrist," driving a convertible, bores the hitchhikers with his discussion about kidney function. Another woman named Sarah invites the guys to a farm near Owensboro, Kentucky, where they find themselves drinking out of beer bongs, eating mutton sandwiches, and avoiding donkeys that keep blocking the driveway. One young woman just broke up with her fiance after eating bad lobsters under a rotting giraffe. More than once, someone drives over to give the hitchhikers a second ride on their way, with Ryan using his charm to persuade them to buy McDonalds or Arby's food for the journey. At a bar in Missouri, the waitress treats the guys to free beers and the world's largest tacos when she isn't explaining that the place used to have a brothel upstairs. The bar has a large cocktail neon sign outside, and the cherry would light up when the the prostitutes were ready for their next customers (a red light district variation on Krispy Kreme doughnuts). If it's a guy who lost an eye in a bar fight, an African American couple who gives them pickles, or a Christian couple hauling around fancy trucks, most everyone proves engaging one way or another.
Even though Ryan and Phillip often think of quitting, or taking an easier route (like hopping a train), they persist even in the increasingly hot regions out west. Occasionally, the film occasionally dips into cutesiness and self-glorification, and sometimes the subtitles are misspelled. Still, The Hitchhiking Movie still struck me as a winning indie effort, in part due to Phillip and Ryan's adventurous chutzpah, but also due to the cross sampling of talkative drivers who provide a weird yet ultimately generous portrait of America.
Labels: The Hitchhiking Movie