Return of the Snake Monster: Jennifer Lopez in Anaconda (1997) 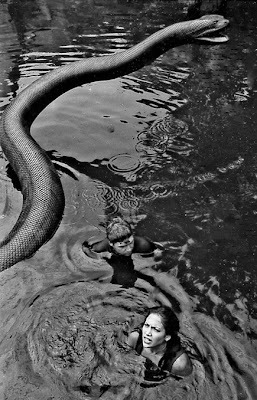 [Note: In 1997, a fledgling movie critic reviewed a cheesy large snake film called Anaconda. 12 years later, he wondered if he would ever have a reason to republish the old review, but then came a scene in Zombieland when scrappy zombie killer Wichita (Emma Stone) reminisces with Columbus (Jesse Eisenberg) over her first R-rated film: Anaconda. Here's the time capsule review.]
There's a dirty rumor going around that most studio-produced movies are written by some fancy new computer software that triangulates other popular films into unoriginal but lucrative packages. This might explain Anaconda, a scrappily-made film with minimal characterization that swirls together Apocalypse Now, Jaws, Jurassic Park, and Swamp Thing.
Whether or not you find the film entertaining depends on what you come to the theater for. If you like bad guys who roll their eyes and sneer to affirm their bad-guy-icity, as Dennis Hopper does so well and Jon Voigt does in this film, then by all means go. If you like clever computer-animated effects combined with the most simplistic snake-o-vision-from-the-water camera angles, then buy your ticket now. If you enjoy a film that frequently cuts from violent acrobatic death scenes to scantily clad sweaty Jennifer Lopez with a concerned expression on her face, then this is the film for you. 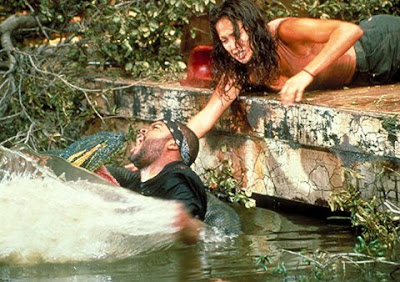 The plot is simplicity itself. Eric Stoltz, looking angelic as usual, guides an eclectic crew of documentary filmmakers into the deepest part of the Amazon jungle to encounter Paul Sarone (Voigt), where, after a fashion, they all go snake hunting. The characterization is on par with a Hanna Barbera cartoon, with the foppish sophisticate, a sinister-looking druggy boat captain, two pretty California people (good snake food), and Jennifer Lopez roughly approximately Helen Hunt's role in Twister. In one clever twist, the filmmakers decided to include Ice Cube to show how Compton-style rapper street smarts fare in the Darwinian jungle (Ice does just fine).
In the tradition of horror films, you wonder which characters are expendable enough to get killed off first (there they go, one by one, with a few false alarms). In the tradition of Jaws, you learn not to go in the water. The anaconda himself, about the size of a large telephone pole, enjoys squeezing people until their heads or eyeballs pop out and then he bites their heads off afterwards. Cool! People die, the plots twists, and the audience gasps and screams. There were times when the sheer calisthenic ability of the computer-generated snake impressed me, but this movie sure didn't.
Labels: Anaconda

Richard Bellamy said…
Very funny! I just got back from seeing Zombieland - I loved the references to 1997 movies Titanic and Anaconda - and then I saw this post.

Yeah, it's terrible, but I enjoy any movie set in the jungle (there are some great shots of the Amazon) with a big monster - even if it is a ridiculous example of the worst CGI. And I've always been fascinated by anacondas.
October 4, 2009 at 5:39 PM

The Film Doctor said…
Thanks, Hokahey. I enjoyed Zombieland too. It still seems strange that there seems to be not one but two decent films out this weekend, including Whip It.
October 4, 2009 at 5:48 PM

Daniel said…
It appears I have to see Zombieland if only because it references Anaconda, one of my favorite movies of the 90's. I just can't get enough of Jon Voight's performance here, and like Hokahey I dig the setting of this one. Granted, I never saw the sequel, but this one still holds some fun nostalgia for me.
October 7, 2009 at 11:27 AM

The Film Doctor said…
Thanks, Daniel. I think perhaps part of Zombieland's success comes from its willingness to celebrate and participate in the cheesiness of a genre film such as Anaconda as it transcends it. At any rate, the movie is loaded with cinematic references designed to appeal to film critics.
October 8, 2009 at 8:48 AM