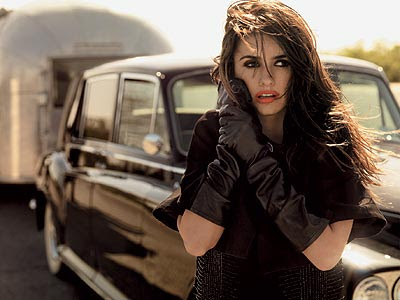 ---Infernal landscapes.
---Our age of attention whores.
---Newsweek considers 2009 as possibly the most depressing year at the movies:
"Fall movie season is usually the time when the studios haul out their dark dramas for awards consideration, but this year's batch seems especially bleak. The themes they touch upon include incest, murder, AIDS, cancer, abuse, layoffs, and lots of unexpected, tragic deaths (and we're not even counting the dead vampires in the Twilight sequel). This probably isn't just coincidental. This fall's slate was written at the end of the Bush administration, when most of Hollywood—at least the predominantly liberal part—was under a cloud of gloom. Now, we're all feeling gloomy; the economy is in tatters, and the unemployment rate continues to soar. Does anybody really want to go to the movies this year to feel even more depressed?"
---Sadly, the world may not end in 2012, and besides, the Mayans are getting annoyed with all of the profitable misrepresentation of their legends.
---Dr. North of Spectacular Attractions compares the two versions of Michael Haneke's Funny Games:
"I’ve always been uncomfortable with the didactic nature of the film, but I admire its commitment to unsettling its viewer. It’s still possible, if so inclined, to enjoy it as another extreme thrill ride (I’m often amazed by the ability of horror fans to shrug off even the most gruelling of movies or to compartmentalise them as compendia of bodily destruction in all its variations), though you can see Haneke trying to thwart such attempts at complacency. Funny Games doesn’t play fair – the divisive moment where one of the killers uses a remote control to rewind the film to make it replay in his favour breaks a contract with the spectator that their involvement in the fiction can have an influence on it. We like to believe that because we’re on the side of the innocents, the filmmaker will at least reward us with some relief, some catharsis or vengeance, but there is no comfort here: in this place of carefully applied violence, dogs and children die first. Why? Because they’re not supposed to, and thus is highlighted the artifice of the conventions that usually govern film violence."
---Anne Helen Petersen examines the essential banality of the Vanity Fair celebrity profile of Penelope Cruz.
---Matt Zoller Seitz looks more closely at the political implications of Marlon Brando's On the Waterfront.
---Film Studies for Free treats us to an hour long interview with Alfred Hitchcock. Also, A. O. Scott enthuses over Vertigo.
---Buzz Machine analyzes how the old media executives are not getting "the collaboration economy":
"Add this to the other blind spots these old media powers have about the new economic reality: the imperatives of the link economy, the need and benefit of giving up control, the advantages of creating open platforms over closed systems, the value of networks, the post-scarcity economy and the art of exploiting abundance, the need to be searchable to be found, the deflation innovation brings, the value of free, the triumph of process over product…."
---Brando, Herzog, and Criterion: the first chapter of Jonathan Lethem's Chronic City.
---87 cool things.
Labels: Notable film and media links

bd said…
Nice list. Lu Guang's photos will be with me for awhile. Man, can we screw up a good thing.

Essential banality is right... the act of interviewing someone who has uncontrollably interesting physical characteristics along with some capacity to befriend a camera is a high example of the banal.

That there is a burgeoning media industry based on hyping the lives of these mostly sad people gives us a peek at our own banality-meter.

The Film Doctor said…
Thanks, JUS. I should have also mentioned that I often like Vanity Fair's journalistic pieces, but it is weird to encounter the magazine's celebrity profiles that seem to be included just to make an attractive cover.
October 18, 2009 at 9:04 AM