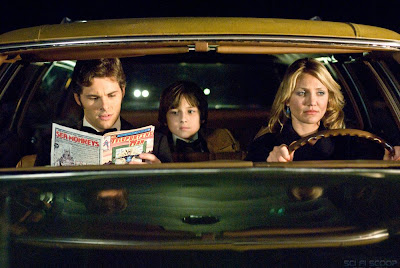 ---How you can tell that Charles Bronson is a man.
---Recommended reading: Farber on Film: The Complete Film Writings of Manny Farber, edited by Robert Polito. In a review of the new book, Howard Hampton notes some surprising aspects of Farber's critical method:
"1) The notion of what movie to see and what to avoid is secondary to opening up new ways of looking at the familiar and the overlooked.

2) He steadfastly refuses hero worship: "To put Hitchcock either up or down isn't the point; the point is sticking to the material as it is, rather than drooling over behind-the-camera feats of engineering."

3) He has scant interest in narrative, either of plot-driven or symbolic/sociopolitical kinds, and is more taken with spatial dynamics than happy endings or movie martyrdoms.

4) He has a nonchalant way of rolling out a convoluted 20th century landscape in which Godard meets Dick Tracy, Anthony Mann carries more weight than John Ford, and the scummy cesspools of Don Siegel beckon like an old Esther Williams water ballet. Indeed, Farber had a special knack for creating a mental space where everything exists in the same eternal present tense, the 1932 "Scarface" and the 1970 acid gangster trip "Performance," Boris Karloff and Mick Jagger sounding like long-lost brothers-in-arms waving to each other across the Warner Bros. lot."
---50 iconic movie stills.
---An interview with Richard Kelly.
---The internet is killing storytelling and privacy, Twitter is killing blogging, but at least zombies are doing well.
---David Lynch's rabbits stole the show in Inland Empire.
---I miss grunge (and I'm wearing flannel as I write this).
---I really enjoyed Richard Brody's profile on Wes Anderson. Too bad there's no decent link yet. Here's a quote from it:
"As an undergraduate at the University of Texas at Austin, where he majored in philosophy, Anderson remained movie-obsessed, working part time as a projectionist. (His conversation is liberally seasoned with film references, from John Ford's 1935 comedy The Whole Town's Talking to Jean-Pierre Melville and Jean Cocteau's Les Enfants Terribles, which, he argues, marked the beginning of the French New Wave.) In Austin, Anderson met Owen Wilson, an English major, in a playwriting class. Wilson noticed Anderson sitting by himself, away from the table where the other students gathered, wearing `L.L. Bean boots with long corduroy-type shorts.'"
---Single take titles.
---Beware of cute overload, or kangaroos for that matter.
---Marlene rules.
---Oops! Publishers Weekly forgot to include a female writer.
---Andrew O'Hehir notes the resurgence of the British indie-film industry.
---Lastly, when movies mention their titles.
Labels: Notable film and media links

Doniphon said…
I only have the the collection of Manny Farber's writing called Negative Space, but it is one of best written things I have ever read. It's truly inspiring.
November 6, 2009 at 11:35 AM

Ebrahim Kabir said…
Thanks for sharing this wonderful set of links.
November 6, 2009 at 1:28 PM

The Film Doctor said…
Thanks, Doniphon,

I'll look into the Negative Space section of the book. Farber has a nicely detailed style, and I enjoy his painterly interest in visual patterns. I also like the way he tends to steer away from summarizing plots, something that seems to me to be less needed in the film blogosphere.