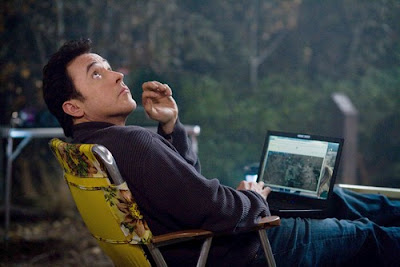 ---Icons of grunge. Where are they now?
---2012 by way of Raising Arizona (with thanks to The Cooler). Emmerich justifies his weltschmerz. NASA spoils the fun by debunking apocalyptic 2012 myths. Lastly, behind the scenes of 2012.
---For those who really want to dwell on upcoming doom, check out Collapse. As Matt Cardin points out,
"It’s probably difficult or impossible for somebody who hasn’t been following the peak oil story for the past several years to understand the depth of the “Holy crap” feeling that many of us are experiencing right now. A large part of that feeling comes simply from the fact that, as I’ve mentioned here before, lots of things appear to be playing out according to the long-forecasted “plan,” including, most prominently, the expected development in which oil-and-energy issues have moved to the forefront of public discourse. Of course that has nothing, or at least not much, to do with the question of whether peak oil is actually “real” — a word that raises the need to distinguish between peak oil, the geological phenomenon, and peak oil, the theory that ties oil’s fortunes to the very survival of growth-based economies and industrial-technological civilization. In our ever-intensifying age of 24/7 digital linkage and global conversation, it’s impossible to ferret out how much of what we’re collectively thinking and feeling comes from reality itself, as in, the reality outside the media web, and how much is simply a self-reinforcing feedback loop.What’s incontrovertible is that we’re right now living through the giddiest age of apocalyptic cultural ferment that any of us have ever experienced. I think it’s safe to say that it tops the ones that accompanied the turn of the 20th century, and the advent of World Wars I and II, and the Depression era, and the social and cultural upheavals and meltdowns of the sixties and seventies, and the turn of the 21st century. It even tops 9/11, although in fact it incorporates the 9/11 feeling of an imminent breakdown in everything. Maybe the only thing that equals it is the nuclear terror of the Cold War era. Because now, as then, the fear isn’t just of a national or international breakdown or some such thing (although obviously that one is currently in play, too) but of a show-stopping calamity that would write “The End” on the last page of the book that is the human race, or at least on the book that is civilization as we have known for at least a century or two (since the full implementation of the Adam Smithian economic growth model and the rise of technocratic industrialism). The ecological term “die-off” has gained currency. The word “collapse” is on everybody’s minds and lips."
---Never fear, however, because now we have a dozen ways to avoid death.
---David Bordwell appreciates the visual pleasures of 1930s cinema.
---Behind the scenes of Lady Gaga's "Bad Romance."
---The New York Times deeply considers the phenomenon known as Megan Fox.
---Good to see Richard Kelly getting some credit.
---Godard's intertitles. Also Godard largely doing nothing for three and a half minutes (not that I have anything against procrastination).
---Salon's Woody Harrelson interview:
"Then he got into bed. There wasn't an ounce of pretense about any of this, I swear. He was curious to get a look at that old apartment, and felt like telling me about it. He was tired, so he got into bed. When you meet Harrelson, you get a momentary glimpse of what a strange and exhausting job it must be to be famous. The job involves meeting an endless ocean of people you don't know and most likely will never see again. The obvious solution would be to retreat behind a well-rehearsed performance of your persona, to recycle a handful of gestures and mannerisms.Harrelson, on the other hand, seems like a guy totally determined not to let the artificiality of these interactions impinge on his sense of who he is. Perversely, the fact that he is frank and thoughtful, and known to hold unorthodox political opinions he doesn't keep to himself, has only augmented his fame. You can't throw an empty Chardonnay bottle out your car window in west L.A. without hitting a Hollywood liberal, but Harrelson is something much rarer: a vegan, raw-foodist, antiwar, anti-capitalist, pro-marijuana, eco-funky, genuine radical who happens to be a beloved character actor with a good-ol'-boy demeanor."
---Lastly, the coolest movie ever adapted from a questionable book.
Labels: Notable film and media links

Jason Bellamy said…
I was doubtful that the phenomenon of Megan Fox could be dissected in any more than five words, but that was an interesting piece. I always find something great in your links. Thanks!
November 12, 2009 at 1:54 PM

The Film Doctor said…
Thank you, Jason. I tend to look at The Cooler as exemplary both in terms of attitude and writing skill.
November 13, 2009 at 3:04 AM