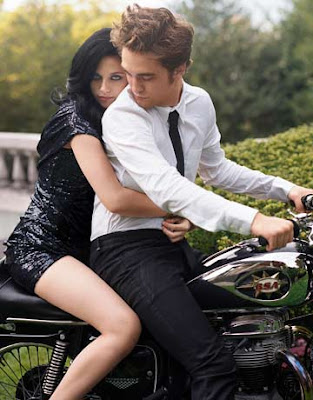 I've been intrigued by the extreme Beatlemania-esque media attention generated by The Twilight Saga: New Moon. I liked Twilight in a slightly ironic way, finding "vampish humor in its Gothic excess," but the frenzy for the franchise keeps building, and I admire how Summit Entertainment has doled out choice nuggets of press to keep the fans involved. In her blog Celebrity Gossip, Academic Style, Anne Petersen was surprised by the amount of interest generated by her post "Why Kristen Stewart Matters" back in September, and she recently followed that up with "The Politics of Twilight Web Traffic":
"Twilight posts, sneak peeks, trailers, gossip, and speculation have turned into a self-perpetuating phenomenon: even if people don’t necessarily care about them, and even if there’s not really news, if you post it, the fans will come. And the fans will continue to come as more information is promised — as my friend Nick recently posited in our co-authored forthcoming article on celebrity twittering, `there can never be enough information on a star; therefore, more information is always needed.' The fan hopes for one crucial piece of info — a picture, a quip, a video snippet — that promises provide access to the authentic kernel of the star. In the case of Twilight, the revelation of the apparent Pattinson/Stewart relationship only further expands the desire for more information: now that we’ve seen them touching, can’t we see them kissing? Won’t that tell us everything we need to know? About them, our own hopes invested in their romance, and love in general?" 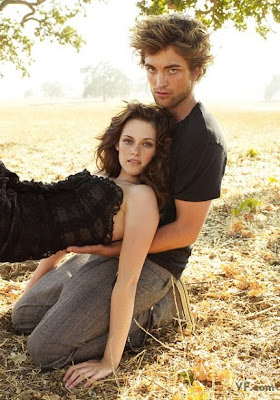 Given all of the speculation about a possible Pattinson/Stewart relationship, I am reminded of the contrived studio romance between Don Lockwood and Lina Lamont in Singing in the Rain. Summit probably doesn't mind if people think there is something going on, so the media feeds that frenzy with "Are they or aren't they" articles even as the stars deny the rumors. For Entertainment Weekly, Kristen Stewart settles the matter by saying "We are. We aren't. I'm a lesbian."
Related links:
---How Twilight bait is gumming up the internet.
---the New Moon marketing campaign in a nutshell.
---Screencrave wonders if Bella is a feminist's nightmare.
---Chuck Tryon of The Chutry Experiment weighs in on the New Moon phenomenon as "a fascinating example of how internet buzz can develop around a transmedia franchise such as the Twilight books and movies and what it might mean for film fandom."
---Vanity Fair gradually releases new photos of Robert Pattinson.
---Details magazine reflects on the insecurities caused by all of this vampire lust.
---New Moon director Chris Weitz explains the Twilight series' appeal.
---Cinematical interviews New Moon screenwriter Melissa Rosenberg. 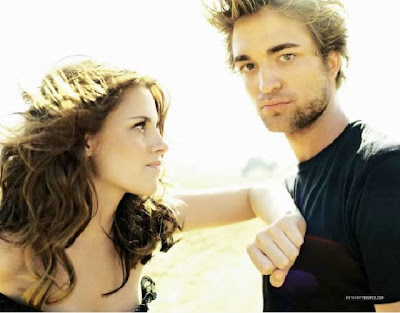 ---Anne Thompson interviews Pattinson.
---Twilight moms?
---Harper's Bazaar has Stewart and Pattinson wear Givenchy and Dior Homme.
---For The New York Times, Kristen Stewart deals with the media frenzy:
"For now, Ms. Stewart is just focused on getting through that mall tour in one piece. `It’s not even like I’m scared that they are going to rush the stage,' she said, `although they could totally assassinate me at any time if they wanted. When so much energy is thrown at you, it has to throw you for a loop.'”
---The inevitable backlash.
Labels: The Twilight Saga: New Moon

Richard Bellamy said…
My last year's 8th grade history class had quite a group of fanatic Twilight devotees. I heard some of them squealing during the preview when it was shown in front of Jennifer's Body. They have already bought their tickets for Thursday night. Much more important than being awake in school the next day! Meanwhile, some of the older members of my drama club detest the book and movie. Whatever - I shall definitely see the next installment in the saga so that I can be in the know. I rather enjoyed the first installment.
November 15, 2009 at 3:38 PM

The Film Doctor said…
Yes, the first film reminded me of Pride and Prejudice due to the severe class differences between Edward and Bella. It left me wondering why the vampires tolerated humans at all. I liked the Cullen's aristocratic detachment.
November 16, 2009 at 8:31 AM

Unknown said…
the romantic love story must be like The twilight saga: new moon. it has included fantasy , curiosity as well as love. i have watched its first installment " Twilight". it made me crazy. omg, it was really wonderful. hope the second also will be like that
source
http://blog.80millionmoviesfree.com/in-theaters/the-twilight-saga-new-moon-2009-trailer-she-needs-to-prove-the-loyalty
November 18, 2009 at 5:43 AM

The Film Doctor said…
Thanks, wiona.

I find I prefer the original Twilight to the sequel. There's seems to be less pressure on making money the first time around.
November 22, 2009 at 1:08 PM