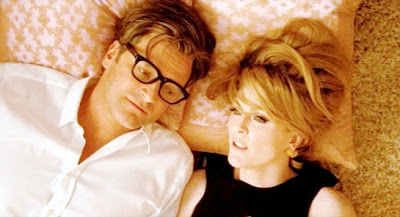 ---Is Colin Firth the "best actor of his generation"?
---Sign of the apocalypse or media stunt? Man twitters at the altar.
---Charlie Brown animator Bill Melendez and his influence on Wes Anderson (with thanks to Tracey).
---It's about time: eco-friendly killing.
---North by Northwest on acid. In the same vein, Domo Darko.
---Ed Howard and Jason Bellamy converse about Lawrence of Arabia:
ED HOWARD: What I appreciated about the film was how subtle it was, how introspective it was for an epic. In some ways, a lot of it doesn't even feel like a conventional epic. Sure, it's long, and filled with those widescreen crowd scenes that are pretty much the aesthetic bread and butter for the genre. It's even packed with Biblical allusions and Christ allegories, aligning it with the grand religious tales, from The Ten Commandments to The Passion of the Christ, that always seem to be prime subjects for these spectacles. But what sets Lawrence of Arabia apart from typical epics (which generally underwhelm me) is its texture. David Lean has a real eye—and ear; the film's soundtrack, beyond its bombastic score, is stunning—for details, for carving out emotions and themes from the smallest touches.
---Kubrick and Napoleon.
---Major directors discuss the movies that matters to them:
Sally Potter: "As a child, I probably knew every frame of Monsieur Hulot's Holiday. I knew the sequences off by heart. I think what indelibly struck me was not so much the comedy of it, which often felt slow, as the compassion in the observation: this observation of small moments, a swinging door. The emptiness of the soundtrack, which just has one or two effects dropped into it. Almost the feeling of it as a kind of meditation on loneliness and the social behaviour of people attempting to have a good time. It was the tragic part of the comedy that impressed me and the minimalism of the means with which it was realised. I think as a child I was experiencing it as a minimalist transcendent meditation more than as the work of a comic genius.I just quickly looked up something about Tati and discovered something which I hadn't known before, which was that he lived most of his life in poverty, having to raise mortgages on his previous films to raise money for the next ones. The solitariness of that position as a film-maker I realised was imbuing the films themselves with the melancholy. I found that a fascinating piece of hidden information about the work."

---The evolution of the hipster.

---As part of the recent typography craze, check out this perfect video mash-up between the excellent Helvetica and Lady Gaga's work called "Neutra Face."

---Amongst the many best films of the decade/year lists, I liked John Water's, Richard Brody's, and Martin Scorsese's best of the 90s.

---Time to throw the laptop away: Cormac McCarthy's Olivetti.

---The art of getting noticed: Frederico Alvarez's Panic Attack!

---It is true that you can get noticed and published quickly thanks to Twitter.

The Film Doctor said…
Thanks for the recommendation, Joe. I like Firth in Easy Virtue, Bridget Jones's Diary, and The English Patient.
December 3, 2009 at 7:27 PM