Budweiser, bravado, and Baghdad: 6 questions about The A-Team 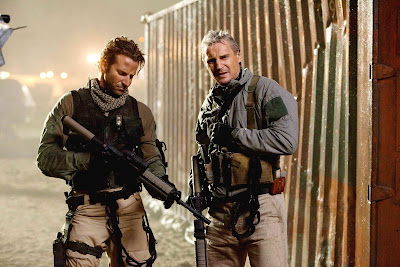 When the '80s came along, we entered a world of steroided-out superheroes, starting with Superman. Sly, Arnold, even Bruce Willis would re-fight the Vietnam war, and win. A country that in LBJ's words had truly become a helpless giant, needed a fantasy where it was not impotent, where it was as strong as Arnold, as invulnerable as Robocop. ---Robert Towne
1) What vision of American jingoistic beer-drinking uber-masculine chortling cigar-smoking arrogance is The A-Team trying to sell us? Early in the film, after having a Budweiser-product placement party around a kiddie swimming pool, the team pops into Baghdad and with frictionless ease takes some plates used for counterfeiting American dollars from some Saddam Hussein loyalists. In fact, we see the implementation of the plan as Hannibal (Liam Neeson) explains what the plan is (the two scenes are interspliced together). I was surprised that the team didn't go on to have a campfire outside of Abu Ghraib, toast each other with more Budweisers, and say "It don't get no better than this!"
2) Why does B. A. Baracus (Quinton `Rampage' Jackson) turn against violence? He hates to fly, understandably enough with mad Murdoch (Sharlto Copley) piloting whatever helicopter, transporter jet, or jeep he might happen to be on, but while he's in jail, Baracus also develops a religious(?) aversion to killing. I understand that the original televised Baracus (Mr. T) had the same fear of flying. Did one of the screenwriters think it might be fun to ironically throw in some Gandhi-esque nonviolent protest into an action film?
3) How, exactly, does Hannibal (Neeson) escape from a prison crematorium? First, he smokes a special cigar that makes him resemble a corpse. Then, when he's about to be cremated, Hannibal wakes just in time, punches the flaming jets away, and then jumps out into what? A sprinkler system? Do crematoriums have sprinkler systems?
4) Didn't Neeson used to be in better movies?
5) What is Jessica Biel doing in The A-Team aside from providing a possible love-interest for Face (Bradley Cooper)? She plays Charisa Sosa, a captain who has the ability to initiate some covert ops of her own. In a film that has explanatory flashbacks in case you don't remember a character or a scene, I really couldn't tell what her character was doing. Perhaps, given that everything is just another pretext for another action scene, it doesn't matter. 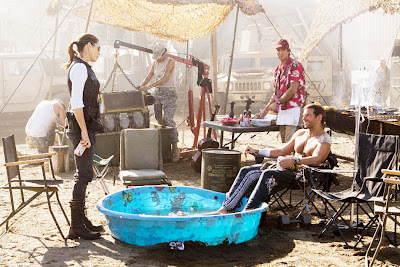 6) Why does The A-Team emphasize fate so much? In this 10-years-in-development movie that obliged Twentieth Century Fox to hire 11 screenwriters, Hannibal talks frequently of planning, saying things like "I love it when a plan comes together." When he happens upon B.A. Barracus in the midst of a product-placement GMC van-jacking early on, he says "I don't subscribe to coincidence. I believe that no matter how random things might appear, there's still a plan." So, he looks for a cosmic plan--i.e. fate. Perhaps fate becomes important because of the frictionless ease in which The A-Team accomplishes their missions. They successfully implement 80 missions in 8 years! That's about one death-defying mission per month. At one point, I believe they ironically quote from Braveheart (1995): "Tell our enemies that they may take our lives, but they'll never take our freedom!" It's a good thing that they're being ironic, for what would such a quote mean to the invulnerable?
In the end, The A-Team reminded me uncomfortably of the Mission Impossible series. The blockbuster wanna-be action becomes so slick, fast, and stylized, all suspense is neutralized in advance. Instead, they smile and laugh with manly wise-cracking bravado in an endless closed loop of self-congratulation.
Labels: The A-Team

Yet, with all those pairs of eyes, does anyone actually monitor the film during its construction? Does anyone pipe up and say, "hey, this just ain't working" or "wow, this thing is terrible"?

I seriously doubt anyone cares at this point.

As for Jessica, I must admit a lustful longing for her on my end. Yet she's been wrapped from head to toe on too many occasions in too many bad movies -- odd, considering that her limits as an actress would normally demand the exposure of some flesh.

Like the fool I am, I've seen nearly all her movies and what she's doing here is essentially a replay of her thankless appearance in Stealth.
June 16, 2010 at 7:00 AM

The Film Doctor said…
Thanks, Ray. Yes, films like The A-Team are tough to analyze because they are the result of many half-baked notions of a committee of writers, many of which go nowhere (and the article I linked to about the writers mentioned one major studio executive who may merit blame for the whole fiasco). Director Carnahan seemed to want the film to have a nonviolent, non-sexist dimension to make up for its jingoistic bragging, perhaps? It's hard to know because the whole movie is so murky.

Still, the movie has some fun action sequences (I liked the tank one), so I guess that's all that matters to some viewers. The foreign policy implications do concern me. Didn't the Iraq war start due to this kind of quick macho mission and the war's over kind of thinking?

Yes, Stealth occurred to me too. One could say that Biel gets better treatment here than she got in I Now Pronounce You Chuck and Larry.
June 16, 2010 at 9:07 AM

Simon said…
It gave me a headache, but at the same time, Murdock is awesome. Like, I don't want him to get a spinoff, because he's one of those characters that just kicks ass on the side, but why couldn't they put a little more of him in there? It would've been a lot more tolerable.
June 16, 2010 at 7:49 PM

The Film Doctor said…
Thanks, Maurice,

And yet, the falling tank is one of the better scenes! At one point you see a bumper sticker on the back of the tank that says "How's my driving?"

I tend to think of fate, chance, and human volition in terms of Oedipus Rex, but The A-Team plays such a rigged game, you don't get a feel for any of those reasons for things happening. Instead, things happen to create a pretext for another action scene. I guess since Hannibal is so successful with his planning, we can think of him as God.

Murdock reminded me of the gyro captain in The Road Warrior. I was disappointed that the filmmakers used the Sex Pistols' "Anarchy in the UK" to convey his state of mind in the mental institution scene. Both the Sex Pistols and the Clash get more trite with every song of theirs used in a recent movie.
June 17, 2010 at 8:04 AM