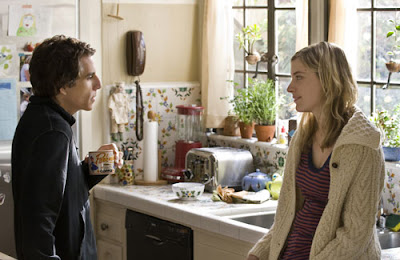 I went to see Noah Baumbach's Greenberg not expecting much, but I was surprised by how compelling the film turned out to be. In outline, the story seems like nothing: Roger Greenberg (Ben Stiller) house sits for his brother in Los Angeles. He can't drive. He has an unspecified reason (agoraphobia? OCD?) for recently being in a mental hospital, and he strikes up a fitful relationship with his brother's personal assistant Florence Marr (Greta Gerwig). Why does this film (written by Baumbach and Jennifer Jason Leigh) work so well? What does it have to do with the mumblecore movement? Some tentative answers:
1) First, Ben Stiller dispenses with his usual star trappings and largely redeems himself for his recent work in the formulaic Museum movies and, say, 2004's Starsky & Hutch. Intent upon doing nothing, Stiller's character Roger is often a self-absorbed "prick," living at odds with the current blank circumstances of his life. At one time, he might've been successful in a rock band, but he rejected an offer to sign on to a label, and now, decades later, his erstwhile band mates still blame him for the loss of that possibility. Roger still lives like an adolescent at the age of 40, caught between what might have been and the life he has not planned for, and this tension within his sense of himself leads to unexpected collisions. At one point he takes the quote "Youth is wasted on the young" further and modifies it to "Life is wasted on people."
2) Baumbach seems intent upon conveying a slice of contemporary life, but one never knows if Greenberg will turn humorous or harrowing. For instance, Roger has to take care of his brother's sick dog, and I found myself exaggeratedly concerned with the dog's welfare late in the movie as Roger navigates a large party and experiments with cocaine mixed with Zoloft. The film is also full of unexpected turns and goofy details. For example, at one point Florence has to go to the hospital, and while Roger's friend Ivan (Rhys Ifans) suggests that they get her flowers, Roger instead buys her a burger and humorously holds it up to her face when she regains consciousness. At another time, he prepares guacamole, chips, and Dreamsicles for an impromptu pool party that he sets up but then refuses to join. He's antisocial, easily angered, and often insufferable. To strike back at the world, he writes letters of complaint to Starbucks, major airlines, and pet taxi companies in a manner that suggests a kinship with Saul Bellow's 1964 novel Herzog. 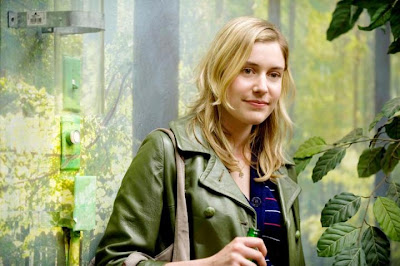 3) Greenberg is so refreshingly character-driven that plot complications become nearly superfluous. Greta Gerwig's Florence does not treat herself well when it comes to men. She listlessly lets Roger half-seduce her as she says things like "Is that a train?" and "I'm wearing a cheap bra." One gradually realizes how much she's let her job as a personal assistant dictate her larger choices. She thinks that as long as she's not really involved, as long as she plays at different roles, then she can live without consequences, but she ends up cheapening herself. Gerwig skillfully conveys this disconnect in her character with absent-minded aplomb. She's extremely good at looking like she doesn't know the camera's there.
4) As for the mumblecore aspect, Baumbach not only casts Gerwig, who has starred in numerous films of that kind, but he also includes one of the Duplass brothers (Mark) in a party scene in the film. (The Duplass brothers, noted directors of such mumblecore films as The Puffy Chair and Baghead have a new mainstream film Cyrus starring Jonah Hill about to be released.) I remember seeing the brothers' Baghead last year on DVD, which also stars Gerwig. I wondered if Baumbach wanted Greenberg to allude to the emotional spontaneity of the mumblecore movement without falling into its usual traps--awkward handheld camera motion, murky improv dialogue, and amateurish pseudo-realism. In contrast, Greenberg comes across as extremely controlled and well-written, and yet loose enough to still retain that sense of authenticity. In his IMDB page, Baumbach says "I grew up in the heat of 70s postmodern fiction and post-Godard films, and there was this idea that what mattered was the theory or meta in art. My film is emotional rather than meta, and that's my rebellion." Greenberg shows how Baumbach has learned how to draw a surprisingly emotional resonance from a modest concept for a film.
Labels: Greenberg

Kelli Marshall said…
"Roger has to take care of his brother's sick dog, and I found myself exaggeratedly concerned with the dog's welfare late in the movie as Roger navigates a large party and experiments with cocaine mixed with Zoloft." The dog storyline was the only thing in the entire movie that elicited any sort of emotion from me. Honestly, that part really freaked me out; I don't do movies in which animals play major roles. The rest of GREENBERG...not so much. After reading several reviews, I wanted to like the movie. I went into the theatre hoping/expecting to like it. But little in there moved me -- in any way. =(
June 13, 2010 at 3:38 PM

Alan said…
I recently visited your blog. It is a very interesting one. Keep it up.

The Film Doctor said…
Thanks, Kelli,

I think I responded more to the film in part because I know people like Roger, and because I liked the way Baumbach often took scenes in unexpected directions. Jennifer Jason Leigh's role as Beth was amusing because she proves intent on getting away from Roger (and out of the movie) once she realizes his continuing interest in her. Also, the later plot development in which Florence has to go to the hospital has an odd correlation to a scene of Leigh's in Fast Times at Ridgemont High (of all movies). Sandwiched between films like MacGruber and The A-Team, Greenberg seemed to me a model of character-driven intelligence and restraint.

Kelli Marshall said…
Ahhh, now it makes perfect sense; you experienced GREENBERG "sandwiched between films like MacGruber and The A-Team..." =)
June 14, 2010 at 5:05 PM

The Film Doctor said…
I keep trying to write about The A-Team, but no dice thus far. Such fast-paced Budweister-drinking uber-masculine jingoistic chortling smugness leaves me at a loss. How to find depth in such superficiality? Didn't Liam Neeson have anything else to do?
June 15, 2010 at 7:17 AM

Jason Bellamy said…
"She's extremely good at looking like she doesn't know the camera's there."

I've been trying to put my finger on Gerwig's innate something and I think you've helped me out.

I had hoped to write about Greenburg as a whole when it came out, and I just didn't have the time. I enjoyed moments, but there were too many instances when Baumbach broke the natural/believable tone for some sloppy one-liner that in most cases wasn't funny anyway. He's a talented writer who needs an editor.
June 16, 2010 at 8:46 PM

Patricia Perry said…
Nice review. I have to agree - I approached "Greenberg" with a bit of trepidation. Though I loved Baumbach's "The Squid and the Whale," I bailed on "Margot at the Wedding" in under 10 minutes. But I found it absorbing and very well acted.

Stiller's performance was masterful. He really tapped into that character's pain and managed to make him, if just barely, sympathetic. There's that moment when he's making up a shopping list, twirling the pencil uncertainly and looking as he if he's trying to figure what normal people shop for (other than whiskey and ice cream sandwiches). He really conveys the feeling that Greenberg has been shut away from the world for a long while and is desperately trying to figure out how someone his age is supposed to act.
June 16, 2010 at 10:14 PM

There were times when Gerwig comes across as too deliberately amateurish, such as when she does a kind of imitation of Diane Keaton in Annie Hall singing at a local bar. She stands so stiffly with her hands open to the audience, it struck me as exaggeratedly awkward. But she does provide a pleasant contrast to the usual ingenue lead.

I agree that Stiller's performance is surprisingly good. Apparently, the two screenplay writers meant for the role to go to an actor in his early 30s, and then they changed it (not completely successfully) to suit him once they heard that he was interested. I liked the way he talked of age differences in the 20-something party. Greenberg and Tropic Thunder show Stiller's willingness to move away from typecasting, to take risks.
June 17, 2010 at 7:54 AM

Anonymous said…
"Sandwiched between films like MacGruber and The A-Team". I also watched Greenberg on a plane (before A-Team); a somewhat captive audience. For some reason the letter writing was a strong character point for me. Thanks for referencing that bit. You have a great website.
May 16, 2011 at 4:02 AM