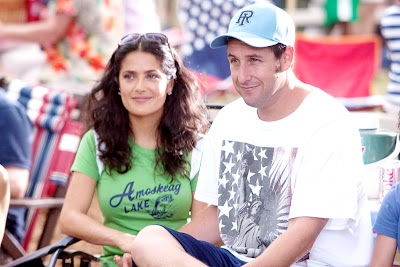 Why? Why does Adam Sandler exist? What explains his success? Is it just because he appeals to his audience's leftover male infantile aggression? Has his monetary success become a fait accompli, a given, so that when Sandler calls Drew Barrymore or Christopher Walken or Chris Rock or Salma Hayek or Steve Buscemi, they always inexplicably agree to appear in his movies? When I first saw Mr. Deeds (with Winona Ryder!) on a scratchy VHS video back in the early 2000s, I was dumbfounded, appalled, astonished. I have since seen and reviewed many of his movies, but that sense of wonder at the popularity of his brand of smirking stupidity has never gone away. It has instead deepened over time, especially now that Sandler's schtick has managed to gain the patina of critical respectability in films like Punch-Drunk Love and Funny People.
What is his secret? Perhaps it's because his movies create a space in which the viewer can feel good about regressing into some useless youthful zone. If the viewer's feeling juvenile, this space allows his infantile interest in poop and bodily functions to be endlessly and unrealistically rewarded. For that reason, Sandler's jokes need not be all that funny, nor his movies all that good. It's all part of the permissive slacker atmosphere that he allows the audience to revel in like overgrown children returning to Romper Room. In Grown Ups, a 4 year old child still drinks from his mommy's breast in front of mildly scandalized guests. That's Sandler's aesthetic in a nutshell.
Returning to his comedic base with Grown Ups, Sandler scarcely seems to have to try at all, so he throws together a gang of his comic pals (Chris Rock, Kevin James, David Spade, and Rob Schneider) to form The Big Chill of poot humor. In its assurance of success, Grown Ups is so incredibly lazily made I wouldn't be surprised if the camera man had trouble keeping awake during the shoot. There is not a plot so much as a gang (a bunch of guys who used to play in a kids' basketball team) assembled in a cottage on the side of a lake for the weekend (to make sense of their lives after their coach's death) in the vague hope of something funny arising out of the air. Sandler now lives in such a stultifying airless vacuum of the super rich, he casts around for some sort of friction somewhere. The film contains stabs at humor, but mainly he wants the viewer to feel like he belongs, and can partake in Sandler's drawling ambience of smug inconsequence. 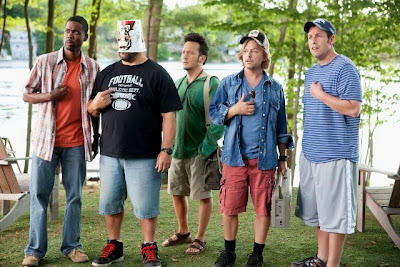 Sandler does betray some anxieties. He wants to write about his life of great wealth without alienating his audience. He also shows signs of wanting to mature, to not be a bad influence, to dial down his bathroom humor without losing his fan base. If Sandler were Woody Allen, he's reached his Stardust Memories phase when he resists people who keep asking him to make movies like "his earlier, funnier ones." Sandler's character (Leney Feder) still sticks his finger up Rob Schneider's derriere during a funeral, but his heart is not in it, so the film is comprised of half-hearted gestures toward alternatives. Wallow in late 1970's nostalgia? Visit a water park? See some fireworks? How about another basketball game? The movie's free-floating sense of what happens next becomes almost abstract. So, the guys fill the time with sketchy jokes that are not really emphasized so much as trotted out and repeated semi-ironically. You get hair-piece jokes, flatulent woman with bunions jokes, practical jokes played on a passed-out drunk jokes, a guy getting racked more than once jokes, slapping someone in the face with a dehydrated banana jokes, KFC product placement bucket on a man's head jokes, spraying a woman in the face with breast milk jokes, etc. Much of the verbal humor comes across as tentative, as in a comedy workshop with the guys chuckling along self-consciously, and with Sandler saying "That's a good one," or not.
Grown Ups is also strikingly full of sentimental gestures. Kevin James falls on a bird, so a child places it in a shoebox and helps it to recover. Salma Hayek's character torments herself for accidentally giving away who the real tooth fairy is to her daughter. Leney Feder worries over his spoiled son's initial lack of desire to throw a rock. All of the guys and their wives dance to late 70s power ballads. They scatter the coach's ashes ceremonially (a scene that directly steals from The Big Lebowski). Leney (spoiler alert) loses the basketball game on purpose so that his working class opponents can feel good about themselves, and of course, the film ends with a mass group hug. Somewhere in the midst of growing up, Sandler has become a purveyor of Cracker Barrel schmaltz for the Kiwanis Club crowd. His sense of domesticated constraint, like the canned pleasure of the amusement park, settles over his film like fallout.
Labels: Grown Ups

Ed Howard said…
Sounds awful. No surprise there. It also sounds kind of like Sandler took Funny People to heart, since much of that film had the same loose, what-happens-next feel, as well as the comedy workshop feel of a bunch of guys sitting around telling jokes and laughing along — although of course in that film it was at least motivated by the plot. It does sound like he desperately wants to mature, to be taken seriously, and has no idea how to do that.

Personally, I liked how Sandler twisted his man-boy persona into something dark and even self-critical in Punch-Drunk Love and, to a lesser extent, in Funny People, even if the latter film completely falls apart after a while. In general, though, I'd agree with you that he's an awful, unfunny presence in any movie he churns out.
June 28, 2010 at 9:44 AM

Free Best Movies said…
I have watch Grown Ups, and sure, this movie didn't prommise the best story, its clear as stated in the official plot. And it's definitely not The Official. Why is everyone hating on this show so often? It's not the crush film e'er or flat Sandler's pessimal flick.
June 28, 2010 at 11:06 AM

sophomorecritic said…
Completely agree with you about Sandler.
I was hoping the presence of Chris Rock,who complains about how he's always getting bad material and consciously tries to find something that won't embarrass his fans, what have meant the film had some standards
June 29, 2010 at 5:22 PM

As long as his comedy is built out of celebrating regression, Sandler can't do much about his desire to mature. The men keep saying things like "Not in front of the kids!" What does a Adam Sandler-esque parent do with himself? Implode?

Thanks, sophomorecritic. I was especially bothered by the presence(?) of Chris Rock in the movie, who has nothing to do and nowhere to show off his considerable comedic talents. He's just hanging around. That's one reason why I am befuddled by the presence of so many decent movie stars in Sandler's films. What do they get out of the experience, because it sure isn't a strong character? I wonder especially about the women--what do Hayek and Maria Bello and Maya Rudolph do when the guys continually make "Oh no! Gross!" jokes about an older woman sleeping with Rob Schneider's character. Do they avert their eyes and laugh politely amongst themselves? Does Bello like to spray breast milk everywhere? Does she think it is good for her career?
June 30, 2010 at 7:27 AM