Rock star excess vs the myth of monogamy: 7 notes on Nicholas Stoller's Get Him to the Greek 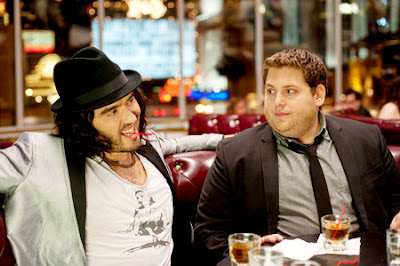 Would you prefer wild parties with rock stars or a meaningful long term relationship based on trust?
Given all of Get Him to the Greek's The Hangover-esque marketing, that's what the film boils down to. While I enjoyed much of the first half, I grew increasingly disenchanted as the movie (written and directed by Nicholas Stoller) hunted around for a message. Some notes:
1) Record company intern Aaron Green (Jonah Hill) has only 72 hours to get "rock god" Aldous Snow (Russell Brand) from London to the Greek Theater in Los Angeles for a show that will resurrect his career. Much partying and The Hangover-ish wild times ensue. Aside from The Hangover, what other movies does Get Him to the Greek steal from?
a) Pierce Brosnan's Die Another Day also features the Clash's "London Calling" as a transition to London.
b) (spoiler alert) Snow dramatically falls from a rooftop into a pool at night just like Russell (Billy Crudup) does in Almost Famous. Stoller heightens his version of the scene with some blood. Almost Famous also shares with Greek the whole innocent-learns-from-decadent-rock-stars theme (with moralistic phone calls from home). Mercifully, Snow never sings "Tiny Dancer" with his band on a bus.
c) Greek shares with Pulp Fiction an adrenaline shot to a character's chest, in this case in an attempt to revivify a comatose party scene in Las Vegas.
d) Aaron Green also dumps the injured body of a heroin dealer off at the entrance of a hospital in a manner reminiscent of Trainspotting.
2) It turns out that Snow has father issues with his ne'er-do-well musician dad (Colm Meaney). How many other recent films have father issues?
a) In Iron Man 2, Tony feels guilty for not completing his father's work.
b) In Robin Hood, Robin therapeutically recalls his dad's political agitations on behalf of the Magna Carta.
3) How is Brand? He's most fun when he spoofs his character's oblivious self-absorption early on. When he calls himself an "African White Christ from Space," he's quite funny, but the more we get to know him, the more conventional he gets. Snow comes up with the phrase "the myth of monogamy," but he also just wants to "feel something again," so he tries to reconnect with his old girlfriend. Stoller seems intent upon making him tiresome.
4) How is P. Diddy as rock executive Sergio? He's excellent at browbeating his employees at Pinnacle Records. One likes him just because he doesn't reform. 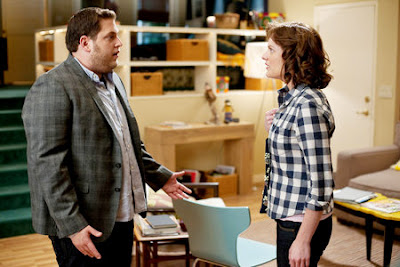 5) How about Jonah Hill? As a male dweeb, he suffers every indignity--vomiting on himself, suffering a rape by dildo, and sticking a balloon full of heroin up his derriere. As Mr. Everyschmuck, he is Hardy to Russell Brand's Laurel. He often finds himself in the awkward position of explaining by cell phone his adventures to his girlfriend Daphne (Mad Men's Elisabeth Moss). She has a nicely squelching reply: "Herpes is incurable."
6) Why do so many recent Hollywood releases fall apart in the third act? Even as the movie frequently reminds the viewer of what little time remains until the big show at the Greek theater, Get Him to the Greek's attempts at narrative urgency sags and distends in Las Vegas. Sergio gets hit by a car. Aaron smokes some weed laced with Clorox, angel dust, and assorted other drugs, which causes him to have a fit. Whereas The Hangover kept one engaged due to its essential black-out mystery, Get Him to the Greek shows signs of increasing desperation as it hunts around for something sufficiently climactic. Snow admits that he's lonely just after falling into the pool. Someone proposes a threesome.
7) Ultimately, The Hangover succeeds in part because it never considers getting ethical. Get Him to the Greek stumbles as Apatow's Funny People did upon its scruples, its profitable(?) need to affirm family values of the American heartland. For all of its straying, Get Him to the Greek clearly prefers the myth of monogamy.
Labels: Get Him to the Greek