A Long Hard Look at Psycho and other links 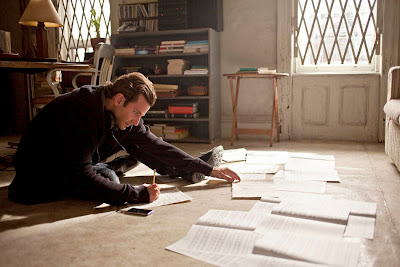 ---making Mildred Pierce and Jane Eyre
---a day made of glass
---Fantastic Mr. Star Fox
---Craig considers Tough Without a Gun and Humphrey Bogart
---"Why Isn't Wall Street in Jail?" by Matt Taibbi:
"[A] veritable mountain of evidence indicates that when it comes to Wall Street, the justice system not only sucks at punishing financial criminals, it has actually evolved into a highly effective mechanism for protecting financial criminals. This institutional reality has absolutely nothing to do with politics or ideology — it takes place no matter who's in office or which party's in power. To understand how the machinery functions, you have to start back at least a decade ago, as case after case of financial malfeasance was pursued too slowly or not at all, fumbled by a government bureaucracy that too often is on a first-name basis with its targets. Indeed, the shocking pattern of nonenforcement with regard to Wall Street is so deeply ingrained in Washington that it raises a profound and difficult question about the very nature of our society: whether we have created a class of people whose misdeeds are no longer perceived as crimes, almost no matter what those misdeeds are. The SEC and the Justice Department have evolved into a bizarre species of social surgeon serving this nonjailable class, expert not at administering punishment and justice, but at finding and removing criminal responsibility from the bodies of the accused.The systematic lack of regulation has left even the country's top regulators frustrated. Lynn Turner, a former chief accountant for the SEC, laughs darkly at the idea that the criminal justice system is broken when it comes to Wall Street. "I think you've got a wrong assumption — that we even have a law-enforcement agency when it comes to Wall Street," he says.
---Sassy Gay Friend meets Black Swan
---"4chan's Chaos Theory" by Vanessa Gregoriadis
---the tsunami at street level
---Jay Rosen: Bloggers vs. Journalists

---Super 8 trailer
---Roger Lowenstein's "Broke Town, USA":
"Vallejo, a city about 25 miles north of San Francisco, offers a sneak preview of what could be the latest version of economic disaster. When the foreclosure wave hit, local tax revenue evaporated. The city managers couldn’t make their budget and eliminated financing for the local museum, the symphony and the senior center. The city begged the public-employee unions for pay cuts — all to no avail. In May 2008, Vallejo filed for bankruptcy. The filing drew little national attention; most people were too busy watching banks fail to worry about cities.But while the banks have largely recovered, Vallejo is still in bankruptcy. The police force has shrunk from 153 officers to 92. Calls for any but the most serious crimes go unanswered. Residents who complain about prostitutes or vandals are told to fill out a form. Three of the city’s firehouses were closed. Last summer, a fire ravaged a house in one of the city’s better neighborhoods; one of the firetrucks came from another town, 15 miles away. Is this America’s future?"
---"Data Mining" by Joel Stein
---Limitless, another dumb movie about a very smart man? (I hope not)
---Raymond Durgnat's impressively close analysis A Long Hard Look at Psycho:
"FORM NOTES: DYNAMIC INTERVALS
Until the window-blind goes up, the half-dark room accentuates the whiteness (and heat) of flesh, bed-linen, and underwear; afterwards, it’s a drab whitish-grey. Entering the room, the camera passes dark indistinct areas of, presumably, furniture, before settling into the crotch-height shot. (It’s all quite unlike the usual establishing shot – more of a disorienting shot!) The camera perches in odd positions (now groin level, now just beneath the ceiling). The angles are steep, the compositions unstable. The shots include distractions (the window is now blocked by a blind, now shows a vast ornate building with rows of windows like blank eyes – staring at the sleazy lovers?
Or not looking at them – just windows looking at this window – blind reflections?) Between restlessly displaced shots, cuts generate unsettling ‘intervals’. ‘Intervals’ was Dziga Vertov’s term for the graphic differences between adjacent shots. They’re a principal source of visual ‘contrasts’ and ‘collisions’ and a mainspring of Soviet montage theory. Directors should so plan their shots, even before shooting, that strong hard cuts generate subliminal shocks on the spectator’s visual perceptions and, by knock-on effect, on his thoughts and emotions. ‘Dynamic’ cuts are the sine qua non of film art, propaganda and agitprop. ‘Intervals’ include, not only ‘differences of graphic forms’, but also ‘jumps between camera positions’. Normally, Hollywood preferred to minimise collisions, shocks and jumps, and keep cuts as soft and smooth as reasonably possible. Hence the traditional distinction, summarised by Thorold Dickinson, between ‘montage editing’ (aka ‘Russian editing’, ‘dynamic editing’, ‘visible editing’), and ‘continuity editing’ (aka ‘Hollywood editing’, ‘narrative editing’, and ‘invisible editing’). Hitchcock understood both schools, and Psycho achieves some remarkable trade-offs (and syntheses!) between montage kinetics and continuity flowings.(Saul Bass may have something to do with it, for modern graphic design often made a point of juxtaposing strong hard forms – in collage, photomontage, comic strips, etc – and a thoughtful craftsman could switch from juxtaposing static forms side by side in space to juxtaposing moving forms successively in time. But many Hollywood traditionalists were so used to setting up smooth cuts they couldn’t or wouldn’t adapt their ideas of ‘good style’ to achieve a degree of expressive dynamic). A virtuoso segue starts with a close shot of the lovers’ profiles on the bed. A cut to a second close shot, at 90° to the first, favouring the back of Marion’s head, makes an eye-boggling ‘collision’, quite as disruptive as any jump-cut. Its dynamic seems to launch Marion upwards, her back to the camera, which pulls back fast to show her long back as she jack-knifes up to her feet, at the end of the bed, and then turns about to march back beside the bed, on which Sam sits up and swivels around to keep looking at her. The camera, having pulled back and up, is as if perched high up on the wall, looking down at her, as she looks straight ahead, as if into a mirror, and dresses again. While gazing off-screen left, she talks to Sam behind her screen right. Her uncompromising words and posture unnerve him; he crosses behind her and sits beside the window, which is on her left in real space, but on her right in screen space.Both complicated and smooth, it’s highly unsettling – very elegant, very disturbed. Later, when Sam almost agrees to Marion’s terms, comes a very simple effect: their profiles in close two-shot, close behind them, the lowered window-blind. It’s tight, close, stable, but – too brief, close, shallow, perhaps, after the ‘tearing apart’."
---Andrew Sarris chooses 5 books of film criticism
---Stanley Kubrick's 1987 Rolling Stone interview
---Alex Gibney explains how to make a documentary
---"Zooming Out: How Writers Explain Our Visual Grammar" by Rob Goodman 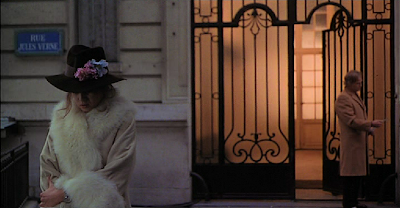 ---Ed Howard and Jason Bellamy converse about Last Tango in Paris
---lastly, Hilton Als' "A Pryor Love":
"It is odd to think that Richard Pryor’s period of pronounced popularity and power lasted for only a decade, really—from 1970 to 1980. But comedy is rock and roll, and Pryor had his share of hits. The enormous territory he carved out for himself remains more or less his own. Not that it hasn’t been scavenged by other comedians: Eddie Murphy takes on Pryor’s belligerent side, Martin Lawrence his fearful side, Chris Rock his hysteria, Eddie Griffin his ghoulish goofiness. But none of these comedians approaches Pryor’s fundamental strangeness, vulnerability, or political intensity. Still, their work demonstrates the power of his influence: none of them would exist at all were it not for Richard Pryor. The actor Richard Belzer described him to me as “the ultimate artistic beacon.” “It was like he was the sun and we were planets,” Belzer said. “He was the ultimate. He took socially complex situations and made you think about them, and yet you laughed. He’s so brilliantly funny, it was revelatory. He’s one of those rare people who define a medium.”

According to Lee, Pryor has been approached by a number of artists who see something of themselves in him. Damon Wayans and Chris Rock wanted to star in a film version of Pryor’s life. The Hughes Brothers expressed interest in making a documentary. In 1998, the Kennedy Center gave Pryor its first Mark Twain Prize, and Chevy Chase, Whoopi Goldberg, Robin Williams, and others gathered to pay tribute to him. Pryor’s written acceptance of the award, however, shows a somewhat reluctant acknowledgment of his status as an icon: “It is nice to be regarded on par with a great white man—now that’s funny!” he wrote. “Seriously, though, two things people throughout history have had in common are hatred and humor. I am proud that, like Mark Twain, I have been able to use humor to lessen people’s hatred!”

In some ways, Pryor probably realizes that his legendary status has weakened the subversive impact of his work. People are quick to make monuments of anything they live long enough to control. It’s not difficult to see how historians will view him in the future. An edgy comedian. A Mudbone. But will they take into account the rest of his story: that essentially American life, full of contradictions; the life of a comedian who had an excess of both empathy and disdain for his audience, who exhausted himself in his search for love, who was a confusion of female and male, colored and white, and who acted out this internal drama onstage for our entertainment."