Say Something: notes on making a romantic comedy 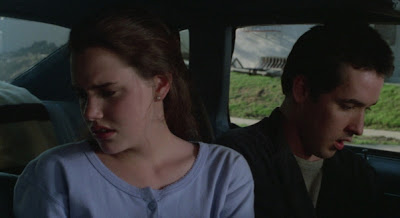 In January, I wrote here about the exploits of an interim filmmaking class. Some of the students decided to continue to make movies into the spring in an independent study. A fine idea, in theory, but some problems have arisen:
A) Our school is extremely rigorous. In the midst of crunch weeks, it's hard to have free time for creative projects.
B) One needs more than an hour's class time to shoot anything.
So, with fits and starts, and rewrites, and much push and pull, the students have put together a screenplay entitled Say Something, the first time anyone in our school has attempted to film a romantic comedy. The story concerns the break-up and reconciliation of Adam and Courtney. To help the class understand the finer points of the form, I show them scenes from It Happened One Night and Cameron Crowe's Say Anything (today we watched the break-up scene in Lloyd's Blue Chevy Malibu, which he describes so well: "I gave her my heart, and she gave me a pen."). As in any filmmaking endeavor, we've been plagued by delays and problems. I've asked the director Ryan to not shoot too fast (his shooting style reminds me of Godard's circa 1964). The crew needs to be careful about weakly lit scenes, awkward shot composition, and not getting enough coverage (expository and reaction shots, especially). As the class gets busier with other assignments, they (understandably) get testier with me, and some of the original fun of filmmaking gets lost in the process. 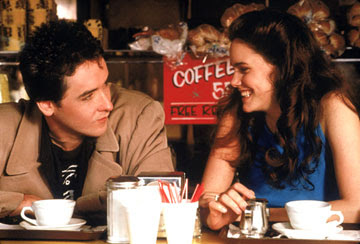 Today, we also rehearsed one dining room scene in an abandoned junky classroom after watching some earlier footage on a Macbook. The actor playing the "douche" Damien doesn't want to have to "meow" on camera, but I remind him that he doesn't have to cry like Courtney does. The actress playing Courtney isn't sure she can cry on cue. I suggest several retakes.
In the story, when Adam and Courtney break up (due to parental interference), they take new dates to a Thai restaurant before a dance. Once they see each other across the room, they have difficulty not looking at each other. Later that night, after leaving the dance, they reconcile under the stars. Here's a sample of the screenplay (note the Say Anything allusion):

"ADAM spreads the blanket on the ground and COURTNEY lies down on her back. ADAM lies beside her, with his feet facing the opposite way. Both of them gaze upwards. The camera is directly above them, and they are illuminated by a full moon. Music can be heard faintly in the background. The boy looks at the girl who is still gazing at the stars.

ADAM: I changed my mind.

COURTNEY looks at him, then back at the sky.

COURTNEY: Do you think they move?

COURTNEY: The stars, do you think they’re moving? Oh, I don’t know...

COURTNEY: I think they are. 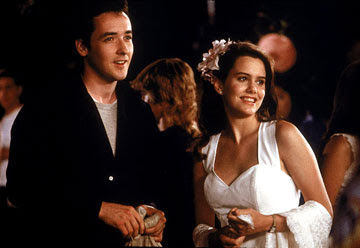 ADAM: I said I changed my mind. I realized how perfect you are for me.

There is a long pause. A guy with a boombox walks by in the background.

COURTNEY: I want to get back together too."

This weekend, the class will attempt to shoot the formal dance scene on Saturday (with an actual dance arranged for extras), the scene involving two parents, the dining room scene, and this star-lit scene on Sunday. They could really use a crane for that last shot.

I look forward to the dailies on Monday.