"No man can walk out on his own story": 8 notes on Gore Verbinski's Rango 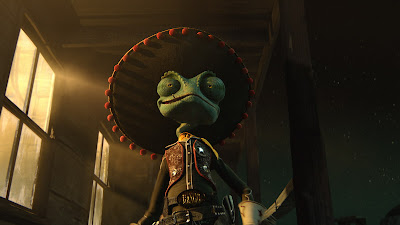 1) I tend to avoid kiddie movies, or "kidult" features, but I was dragged into seeing Rango after losing two games of rock paper scissors with a colleague. Afterwards, I was stunned. Who is this former punk-rock guitarist Gore Verbinski guy? How did he manage to escape the corrupting effects of the Pirates of the Caribbean juggernaut to make this film?
2) Rango has its weaknesses, mostly because it can't help falling into the usual comforting storytelling conventions (notably, the "maiden in distress" and the "final showdown," even as it evokes High Noon), but the film kept surprising me by selecting distinctly arty, subversive, and adult source materials to allude to (specifically Chinatown, Fear and Loathing in Las Vegas (the book), Apocalypse Now, Raising Arizona (with music), A Fistful of Dollars, Singing in the Rain, a hint of Vertigo, and lots of westerns).
3) If Rango was just an accumulation of cinematic allusions, it still wouldn't necessarily warrant much critical attention, but I also liked Gore Verbinski's apocalyptic emphasis on water depletion, an issue that is very likely to become more important as the world's aquifers run dry, the price of water continues to rise, and fountains dispensing drinkable water become a thing of the past. The documentary Flow (2008) points out how water bottling companies, part of a "400 billion dollar industry," are already "privatizing" once-free water just to sell it back to us. For an example of this insidious marketing campaign, check out Jennifer Aniston's pseudo-hip "viral" video for Glaceau Smart Water. As I watched Rango, I wondered how much can children intuit the implications of resource depletion? Why not give them blockbuster movies that acknowledge there is a problem? 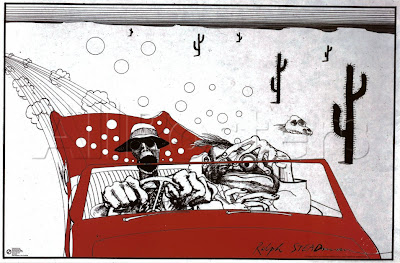 4) What to do, though, about the multiple allusions to Hunter S. Thompson's gonzo Fear and Loathing in Las Vegas? (Never mind the inferior Terry Gilliam movie version, even if it does star Johnny Depp.) Does Verbinski mean to send off his youthful audience to read lines like:
"We were someplace around Barstow on the edge of the desert when the drugs began to take hold. I remember saying something like 'I feel a bit lightheaded; maybe you should drive . . .' And suddenly there was a terrible roar all around us and the sky was full of what looked like huge bats, all swooping and screeching and diving around the car, which was going about a hundred miles an hour with the top down to Las Vegas. And a voice was screaming: 'Holy Jesus! What are these goddamn animals?'"
Later, when Verbinski has a bunch of animals crank up Wagner's "Ride of the Valkyries" for a delightful bat aerial assault on a water bottle wagon train, are kids supposed to go see the equivalent scene in Apocalypse Now?

5) And what of the allusions to Chinatown (1974)? I enjoyed how the evil turtle mayor of the movie voiced by Ned Beatty has many correspondences (white hat, suspenders, similar voice) to John Huston's Noah Cross in the former classic. If one thinks about it, Huston does resemble a smug turtle. I liked the way the mayor kept saying things like "Control the water and you control everything." Rango builds up to an image of Las Vegas as the ultimate waste of expensively imported water (thereby merging Chinatown with Fear and Loathing), but it can't embrace the fundamental bleakness of Roman Polanski's and Robert Towne's vision, and therein lies the rub. Why not have something drastic happen like Rango's love interest Beans (voiced by Isla Fisher) getting shot in the eye? As if to make up for the Disneyfied diminishment of the Chinatown theme, one of the bird galoots in the movie has a permanent arrow through one eye. 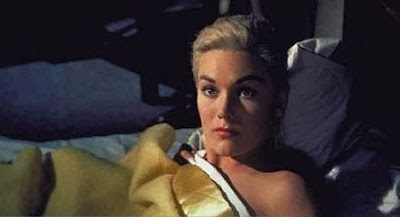 6) What of Hitchcock's influence? At one point, dangling in the air, Rango pronounces that he has vertigo. Also the "spirit of the west" who resembles a more youthful Clint Eastwood, describes heaven as "eating pop tarts with Kim Novak."
7) What of Rango's emphasis on the construction of identity? As in Toy Story 3, Rango begins with an emphasis on play. Rango, the Hawaiian shirt-wearing chameleon hero of the film, stays in a terrarium acting out various roles with a plastic fish, dead bug, and a mannequin which evokes the "Make 'Em Laugh" scene in Singin' in the Rain. When he's suddenly cast out in the desert to find himself (running briefly into Raoul Duke's windshield in the process), he soon adopts the role of a cowboy hero for a bunch of gullible varmints in the town of Dirt. 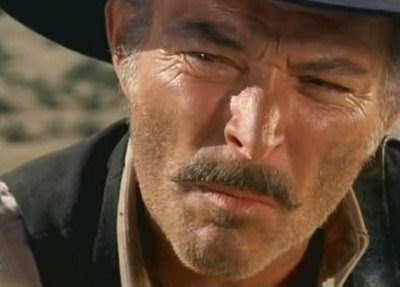 Later (spoiler alert), however, when he proves to be a coward before a menacing Lee Van Cleef-esque Rattlesnake (voiced by Bill Nighy and referencing The Good, the Bad, and the Ugly), Rango has to wander off into the desert like Jesus to figure himself out. He learns that "No man can walk out on his own story." He must become what he play-acted because the people of Dirt believe in him. He imagines himself a hero, and so he becomes one.
8) Thus Rango hints at themes it can't quite fully develop--how the rich attempt to control what remains of our vanishing resources, how we delude ourselves about the desert we face, how the western as a genre can hint at solutions to these problems, and how heroism can sprout from theatrical postmodern play. Not bad for a gonzo kiddie flick.
Labels: Flow Hunter Thompson Rango water scarcity

Sam Juliano said…
"I tend to avoid kiddie movies, or "kidult" features, but I was dragged into seeing Rango after losing two games of rock paper scissors with a colleague."

Ha! Well, the very strong reviews might have goaded you in and of themselves, Film Dr. But I appreciate the allusion to Thompson and to CHINATOWN and the latest trascription of your original approach to writing reviews. I haven't yet seen it, but will do so over the coming days.
March 6, 2011 at 11:41 PM

The Film Doctor said…
Thanks, Sam, for your continuing support over at Wonders in the Dark.

I think that you will enjoy the film. I still wonder, though, which films the chorus of Mexican singing owls might be alluding to. The Treasure of the Sierra Madre perhaps? Or possibly the mice of Babe? They tended to steal the movie.
March 7, 2011 at 8:32 AM

Richard Bellamy said…
I love Westerns, so I definitely want to see this one. Was busy last weekend with The Adjustment Bureau and Beastly. But I will definitely try to see it, especially for the allusions you mention.
March 9, 2011 at 12:18 PM

The Film Doctor said…
Yes, I imagine, given your knowledge of the western genre, that you will catch more of the allusions than I did. I just watched The Adjustment Bureau yesterday, and found it pleasantly restrained and old-fashioned, but weak in terms of characterization especially. I'm still surprised that a)two decent films came out last weekend, and b) the children's film is the edgiest of the lot.
March 9, 2011 at 12:47 PM

Part of the prophetic power of a film like Chinatown stems from the way it anticipates the water crisis and the ways people will or will not acknowledge it. Rango softens the message some, but I still like its attitude.
March 10, 2011 at 1:08 PM

Richard Bellamy said…
Well, I enjoyed the movie. I think the first ten minutes or so, covering how the chameleon gets jettisoned into the desert and how he eludes and later kills the hawk, are masterful. I loved how the movie elusively starts out in the chameleon's terrarium, and how he suffers the waterless desert. Great shots of the water seeping into the sand, the last drop of water in the glass, the chameleon's skin drying up - very funny. Lots of laugh-out-loud moments.

And, throughout, I loved all the Western allusions, though I thought the Eastwood appearance was jarring and heavy-handed and took me out of the world of the story. Also, after the first half, the film gets too heavy-handed and ponderous with the whole Chinatown thing, taking up too much time being almost an animated remake than it spends on being a funny Western parody.
March 10, 2011 at 5:48 PM

I wish Rango was more like Chinatown in some respects, given the way the film concludes with a more standard happy ending. It can't fully face up to the darker implications of the storyline. I like the way the development of the desert is equated with evil.

Yes, when "Clint" showed up as the spirit of the west, I wondered if Mr. Eastwood had given Verbinski the rights to his image. As the character in A Fistful of Dollars, it does make sense that he would help Rango find his heroic side.

Richard Bellamy said…
Forgot to add that Verbinski also alludes to his own last Pirates of the Caribbean movie when Rango is carried on the backs of the beetles (ship carried by those hermit crabs or whatever).

And thank you very much for the link to my John Wayne post. Any John Wayne allusions in Rango? I was expecting one to The Searchers but it never came.
March 12, 2011 at 1:50 PM

The Film Doctor said…
Other critics have pointed out references to The Searchers, but I missed them. Do we see Rango framed by a doorway at some point?

As for the continuing Pirates nightmare, I have seen and suffered (and reviewed) all three flicks thus far. No more.
March 13, 2011 at 10:06 PM

Exodus said…
Great post ! Chinatown was before my time but will make it a point to see it now.

By the way simply loved the appearance of the "Man with no name" and the tribute paid to Eastwood cult dollars trilogy - A fistful of dollars, for a few dollars more and the good, bad and the ugly.