"The humans, what can they do but burn?": 5 notes on The Avengers 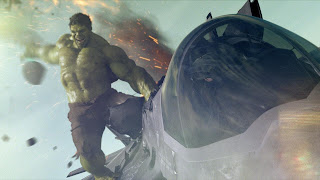 1) Movies where the MacGuffin is a small, blue glowing cube of limitless energy sound very familiar.  Also, blockbuster films have long relied upon military hardware and lots of soldiers running around to provide summertime oomph.  The Avengers has the great virtue of Joss Whedon's wit and humanity infusing every scene, but I still wonder how soon we will draw lines between this movie and, say, some howling clunky blockbuster-wannabe of the past like Armageddon (1998). We are just bored enough to pay to see men in primary-colored outfits duke it out against some army of Chitauri aliens that fly out of a hole in the sky in a Transformers-esque fashion.  Who would dare to say that it isn't good?

2) Perhaps people like The Avengers so much because it celebrates a triumph of branding. The Hulk reinforces his brand by blending together a sensitive, indie, yet still hunky Mark Ruffalo with a green, childlike, cartoonish embodiment of aggression that smashes things.  Viewing the film is like watching Pepsi chat with McDonalds ironically about the inadequacies of Apple as Facebook dons a blue mask before ripping Nike's hammer away in a fit of pique.

3) I didn't care much for either Iron Man movie, although I did enjoy writing "A poignant moment: two robots look soulfully at each other before one flies away." In The Avengers, however, Tony Stark has much better material to mock, so his otherwise smug perpetual midlife crisis character shines here as never before in his Black Sabbath t-shirt. Now he gets to ironically comment on Thor's "red drapes," Captain America's silly retro blue uniform, and the "reindeer game" ersatz horned theatrical costuming of Loki (Tom Hiddleston) otherwise known as the Norse God of Evil.

4) Midway through the film, proclaiming that "freedom is life's great lie," Loki demands that a crowd of humans kneel before him (I always wonder, in the midst of these hubristic scenes, how much the executives of Paramount would like us, the viewing audience, to do the same before this film.  Loki points out that our natural state is subjugation, and given the way the entire human population has stampeded to see this film, perhaps we are proving him correct. As Jonathan Franzen writes in his new essay collection, "[our] species of humanity have given way to a universal crowd of individuals whose most salient characteristic is their being identically entertained" (34)). Movies like The Avengers sends me back to reread Guy Debord's The Society of the Spectacle, because it applies so well:

"The spectacle presents itself as something enormously positive, indisputable and inaccessible. It says nothing more than that which appears is good, that which is good appears. The attitude which it demands in principle is passive acceptance which in fact it already obtained by its manner of appearing without reply, by its monopoly of appearance.

The alienation of the spectator to the profit of the contemplated object (which is the result of his own unconscious activity) is expressed in the following way: the more he contemplates the less he lives; the more he accepts recognizing himself in the dominant images of need, the less he understands his own existence and his own desires. The externality of the spectacle in relation to the active man appears in the fact that his own gestures are no longer his but those of another who represents them to him. This is why the spectator feels at home nowhere, because the spectacle is everywhere." 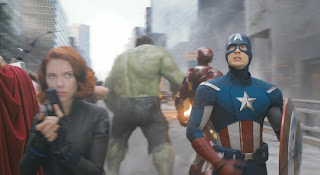 5) I especially appreciated the (spoiler alert) very last shot, after the credits, of the entire Avengers crew gluttoned out, looking tired but bloated after eating shawarma. Easily the best moment of the movie, the scene is not only very funny, it also accurately mirrors the viewing audience's sated expressions as they walk out of the cineplex.  They've had their 142 minutes of superhero overindulgence, witty banter, CGI explosions, and vaguely defined reptilian creatures tumbling out of a portal over New York City. They have now seen the great hormonal intergalactic broughhaha of the early summer before it all turns into wearisome concussive balderdash soon enough (I'm guessing by May 18 with Universal's Battleship). At the beginning of The Avengers, some grim alien, as he gazes down upon earth, proclaims of those puny mortals, "Humans, what can they do but burn?" Over the hot summer, such judgment for our supremely distracted culture may arrive soon enough.
Labels: Joss Whedon The Avengers The Society of the Spectacle

Anonymous said…
1. Superhero teams fight huge enemies and armies. Anytime that happens on earth you're just going to get the military or paramilitary involved. No way around it.

2. The entire film industry is a brand and you are part of it as well.

3. The Iron Man movie was great and you should watch it again, this time as a superhero movie.

4. People did the same exact thing for works such as The Turin Horse, yet art house and indie directors somehow get a free pass for subjugating its audience. At least the Avengers is ironic and self aware enough to joke about stuff like that.

5. Nope. Most people wanted more Avengers when it was done, evidenced by the reaction to the first post-credit scene.
May 6, 2012 at 12:48 AM

Anonymous said…
Well said Mr. Anonymous (the other one). Movies like Iron man are fun and full of potential and wonder for me.

Some of these movies go horribly wrong (I'm looking at you green hornet). But for the most part... these are flashy, exciting movies. I'm getting what I am wanting out of them... but I had clear expectations going in.

I laughed when I saw your description of Armageddon (howling clunky blockbuster-wannabe)... so busy coming up with witty cool-yet-not-mainstream critical comments dripping with presumptions and judgments that you never see the movie for itself. Armageddon was a hit when it came out and it was so much fun to watch. The physics were atrocious, the romantic dialog just silly, it did not have any life lessons, and yet.... was vastly entertaining for me and most people of the day. It was not meant to be a movie where you sat back and were just amazed by the shot framing, or the acting, or the perfect dialog. Level set expectations... maybe then every movie will not be a letdown.
May 6, 2012 at 12:11 PM

The time goes by fast enough. There are lulls when various superheroes stand around brooding.

The Tesseract left me wondering about why so many blockbusters concern themselves with new power sources. As we run out of oil, these movies supply us with dreams of perpetual energy.

Thanks, anonymous 1 and 2. We can agree to disagree about Iron Man and Armageddon. As for your point about my "presumptions and judgment," yes, I'm mostly brooding about the blockbuster phenomenon, the weirdness of so many people seeing one movie and its monocultural implications.
May 7, 2012 at 6:47 AM

bd said…
I may actually see this after reading your post, Doctor.

Originally, it seemed to me like another jacked-up chase-boom-run CGI-fest that leaves me feeling assaulted rather than entertained.

The Film Doctor said…
Joss Whedon made all of the difference. I don't think anyone planned this, but the release of The Cabin in the Woods just beforehand was marketing genius. I ultimately liked that film more than The Avengers, but they both show how Whedon possesses an unusual sensitivity to characterization and dialogue in comparison to other writers and directors who might make a blockbuster. Long after the special effects look tired and old-fashioned (and some of the villains are already instant cliches), audiences will still enjoy the playful banter between the different superheroes.
May 7, 2012 at 2:01 PM