"Love means never having to say you're sorry": 9 things I liked about Dark Shadows 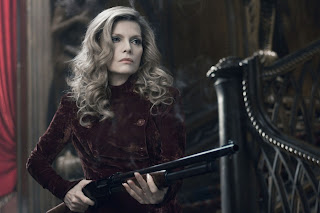 1) because the hippies are disposable vampire meat.

2) because it leaves you wondering . . . what does it mean if you cast your domestic partner Helena Bonham Carter in a role where (mild spoiler alert) she is killed by a vampire bite that drains all of her blood in 5 seconds.  Then, her body's thrown into a boat at night, rowed out to sea, and then dropped in the water with a concrete block tied to her to weigh her down.  What does that suggest about Burton's and Carter's relationship?

3) because of Burton's weird mixture of complacency, nepotism, nostalgia for the early 70's, longing for the sources of inspirations of his earlier movies (such as Edward Scissorhands (1990)), black humor, disdain for hippies, laziness, gothic hyperbole (as in Jane Eyre, which also begins with a newly recruited governess arriving a large spooky estate), insouciant plotting, cliche'd retro-inbred-eccentricity, etc.

5) because Michelle Pfeiffer has a decent role as family matriarch Elizabeth Collins Stoddard, which is enough to make me like the movie in any case, because her character gets to shoot up the Collins estate with a shotgun, because she deserves better than her last 13 movie roles, because America does not appreciate her enough, because she deserves to be treated at least as well as France treats Catherine Deneuve. 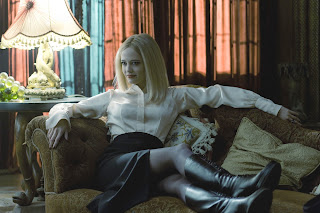 6) because, in part due to the loopiness of the original (1966-71) TV show, Dark Shadows has the kind of plot where prominent characters are forgotten and then suddenly reassert themselves, where affection for actors overrides story coherence, where Burton can say "I can play with my gothic tropes in my 150 million dollar playpen as long as I want to," where the boy David (Gulliver McGrath) communicates with the dead as if he has just wandered over from The Shining (1980), where Chloe Grace Moretz just sulks but her performance as Carolyn is still one of her better recent film roles.

7) because the movie's plot is driven by hopeless romanticism, since much of witch Angelique Bouchard's (Eva Green's) motivation to torment Barnabas comes from his centuries-old rejection of her love. At one point, Barnabas attempts to kiss Victoria Winters (Bella Heathcote).  When she recoils, he asks "Hath my scent offended thee?"  She replies, "No, no!  It's just . . . people I love haven't loved me back."

8) because I inexplicably enjoyed listening to the Carpenters' "Top of the World" during one of the montages.  I used to despise that band. 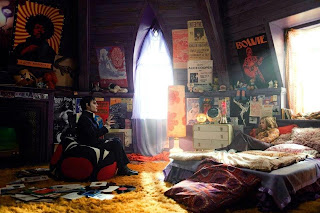 9) because shadows are usually dark, because the movie features an utterly superfluous werewolf, because all of the sets must burn to the ground, because Depp as a smart-ass vampire is almost epically over-exposed and tired. Dark Shadows is so cheesy and unnecessary, it somehow ends up skirting the edge of sublime.
Labels: Dark Shadows Michelle Pfeiffer

The Film Doctor said…
I'm glad that you agree. My post is slightly facetious because my pleasure in the movie was tinged with much irony. What was Tim Burton thinking? Given that he was born in 1958, he was roughly 14 years old when all of that 1972 popular culture ephemera washed over the US. His pleasure in that period seems to work on a subconscious level of association.
May 17, 2012 at 9:33 AM