The military justifies its existence: 8 notes on Battleship 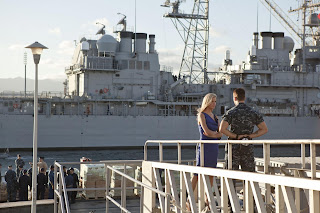 1) Battleship is as blunt and as obvious as a billboard. (After watching the film, I noticed two actual billboards promoting the Marines as I drove around town.) Drawing mostly on the Transformers films, but also Titanic, Top Gun, Star Wars, The Terminator, and a bit of Alien, Battleship provides the viewer with a compendium of recent blockbuster cliches retrofitted to sell the US Navy. It makes sense to me that the filmmakers had to manufacture an alien villain for the US forces to fight against (with Swiss Army knife-like right arms that can twirl around to produce various weapons, no less).  In comparison to, say, Spielberg's Close Encounters of the Third Kind (1977), the fighting men of Battleship remain curiously incurious about the extraterrestrials they bomb, since the enemy is merely a pretext to display the destructive capability and technological prowess of the US Navy. After all, if the alien ships just resemble large puddle-jumping Transformers, why would we get worked up about contact with an alien race?  Somehow the movie's unholy conflation of Hasbro and the US Navy seems oddly appropriate since in both cases, they mostly want to show off their toys.

Crew member: "We need you now."

Lieutenant Alex Hopper (who looks at himself (not for the first time) soulfully in the mirror): "I can't."

From "The $1.45 Trillion Fighter Jet": "While [Florida Governor Rick] Scott famously refused $2 billion in federal funds for high-speed rail in Florida, deriding it as an expensive boondoggle, his team shows no such hesitations about the $1.45 trillion F-35 project. The most expensive weapons system in Pentagon history, it has suffered technical setbacks, nearly a decade of production delays, and substantial cost overruns; the Pentagon currently estimates each plane will cost $135 million to build and maintain."

Lastly, from Salon: "How much are we spending on national security these days? With major wars winding down, has Washington already cut such spending so close to the bone that further reductions would be perilous to our safety? In fact, with projected cuts added in, the national security budget in fiscal 2013 will be nearly $1 trillion."

I wonder, why do Obama's generals want to keep fighting in Afghanistan for years to come? Are wars needed to justify that trillion dollar expenditure? I wonder how much our tax dollars pay for the promotion of thunderingly booming films like Battleship?

Admiral Shane: "All of them."

5) In the movie, Alex Hopper (Taylor Kitsch) no sooner joins the Navy than we see him lying on the sand before a gorgeous Hawaiian sunset as Samantha (Brooklyn Decker) bends over him in her Daisy Duke shorts. A rough life he leads.

6) Battleship concerns an attack of some aliens off the coast of Hawaii.  Engaging in some Rimpac naval exercises at the time, some destroyers happen upon the aliens' large spooky dripping CGI metallic thing out in the water.  When the American ships get too close, a battle ensues, of course, and Alex's brother (Alexander Skarsgard) dies during the alien retaliation. As the tone turns serious for a moment, as people expire dappled with PG-13 hints of blood, the film raises a question: how much tragic grandeur can one extract from a movie based on a Hasbro board game?

7) One thing I learned: the Navy has little tolerance for hipsters.  Two of them appear early on (with beards, long hair, and boxy glasses), and they shake in their Converse sneakers when alien trouble arrives. The definition of contemptible, one cries out for the aid of all of the armed forces when he gets frightened.

8) To the end, Alex remains desperate for Admiral Shane's (Liam Neeson's) parental approval.  When it isn't sentimentalizing veterans or amputees, playing anthemic AC/DC songs, or presenting medals to heroes with a standing ovation, Battleship assumes that, in all things, we must turn to our wise military leaders for guidance.
Labels: Battleship