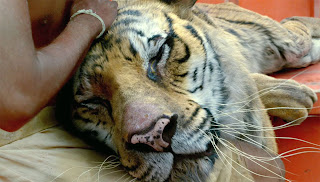 1) With all of its emphasis on Richard Parker, the highly photogenic computer-generated 450 lb Bengal tiger, is Life of Pi Ang Lee's 3D version of a viral cat video?

2) Given the increasing acidification of the oceans and the endangerment of tigers, should we celebrate such beautiful fantasies as Life of Pi?

3) Should a viewer trust any story described within Life of Pi as certain "to make you believe in God"?

4) What does God have to do with Life of Pi?  Is it a computer-generated God?  When Pi yells at the sky "I lost everything!  What more do you want?", are we supposed to think of Job's complaints?

5) When Pi suggests an alternative storyline late in the movie, are we supposed to accept the expedient lie over the truth?  Is the movie suggesting that we can only know lies?

6) Early in Pi's adventure, he finds himself on a lifeboat with a tiger, a zebra, a hyena, and orangutan. Later, meerkats get involved.  Is Life of Pi a version of The Lion King for adults?

7) In Yann Martel's 2001 novel, Pi's father believed the "most dangerous animal" is "the animal as seen through human eyes, . . . an animal that is 'cute,' 'friendly,' 'loving,' 'devoted,' 'merry,' 'understanding,'" basically a "mirror" of humans looking for a reflection.  Even though the novel resists this type of animal typecasting, doesn't the movie constantly risk just that kind of interpretation, especially when Pi laments the fact that Richard Parker walks into the jungle without acknowledging their relationship?

8) Isn't Life of Pi constantly looking for a relationship between Richard Parker and Pi (such as when Richard rests his head on Pi's lap)?

9) Is there really all that much difference between a computer-generated Richard Parker and a stuffed tiger?

10) What does all of critical appreciation of the beautiful fabrications of Life of Pi suggest about our relationship with what's left of the wilderness?
Labels: Life of Pi

Jason Bellamy said…
I don't know the answer to these questions. I do know that for a movie that reminded us several times that it was about (a) religion and (b) overcoming doubt to believe in God, it turns out to be not about God at all. And when the author chuckled as if he'd just had his, "Holy shit, I DO believe in God epiphany..." I lost some of my faith in Ang Lee.
December 2, 2012 at 2:10 PM

The Film Doctor said…
Yeah, I realized that Ang Lee is still only as good a director as the material he chooses. His Brokeback Mountain is a masterpiece, but Life of Pi has a slick self-aggrandizing pseudo-spiritual "adventure of a lifetime" quality that I found disappointing. Environmentalists have other more cogent messages, be they from higher beings or not.
December 2, 2012 at 2:29 PM

Anonymous said…
The older Pi should have been an environmental activist, not some nebulous professor of religion.
December 6, 2012 at 10:58 PM

Ravi said…
I am from the place where the film starts, Pondicherry, India. For me it didn't appeal much- the story, the settings ( not the ship ) and the characters. This not original 1970's Indian young men, they don't talk spiritual and philosophical like Pi. ( May be Pi is different )
January 17, 2013 at 4:01 PM

The Film Doctor said…
Thanks, Ravi. You confirmed my suspicion that there's something slightly artificial about Pi.
January 17, 2013 at 5:24 PM