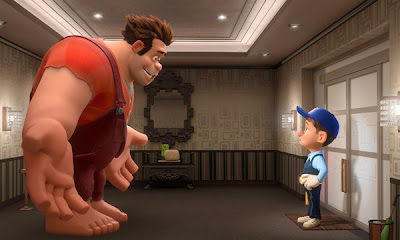 For some reason, I thought that Wreck-It Ralph might share with Scott Pilgrim vs. the World an edgy visually flamboyant potpourri of videogame tropes, but then I sat through the 439 Disney-related ads and trailers of Smurfs sequels, aliens in french maid uniforms threequels, Monsters Inc. 3-D blue monsters, James Franco's sickly over-exposed presence as Oz in an Oz the Great and Powerful trailer, and so on and so forth (not to mention a painful 10+(?) minute trailer for Les Miserables that I've now seen 5 times due to the Regal Cineplex's media torture techniques, with Hugh Jackman and company talking about all of the emotion, emotion, emotion that we're going to see this Christmas as everyone sings, sings, sings (since there's no regular dialogue) syrupy cheesy music with a lot of red flags and revolutionary barricades and a poverty-stricken imprisoned Anne Hathaway looking drained, wan, and tearful with a bad haircut).

Provided that one endures the carpet-bomb marketing, Wreck-It Ralph does have a nice shiny look and an arcade story framework that heavily evokes the Toy Story series (with various video game critters hobnobbing in Game Central Station when the arcade closes), but Mr. Wreck-It himself proves to be an insipid nebbish. 30 years of diligently wrecking the same apartment complex in game after 8-bit Donkey Kong-esque game leaves Ralph feeling unappreciated and unloved by other characters such as Mr. Fix-It, so Wreck-It heads off on a quest to find a medal.  He also visits a support group (Bad-Anon: One Game At a Time) for fellow villains (a zombie, Zangief, M. Bison, a Pac-Man ghost) who tell him that "labels will not make you happy," so the titular character who would be destructive and interesting turns out to be a sensitive in-need-of-approval-and-acceptance dipweed in Li'l Abner mufti with large hands and John C. Reilly's voice.

Ralph does find a medal in a military scene worthy of Battleship in the midst of stumbling into a contemporary military first-person shooter game called Hero's Duty with "tough-as-nails" Sergeant Calhoun (Jane Lynch). Even though she looks younger and blonder, Jane still sounds exactly as she does in Glee, with increasingly stale wisecracks. Wreck-It and some Cybug then contrive to fly into Sugar Rush (a turbo-cute variation of Candy Land), where Wreck-It promptly loses his medal to Vanellope von Shweetz (Sarah Silverman gurgling like she's five years old) in a candy cane tree. Schweetz then uses Ralph's medal to enter a race, but she doesn't know how to drive, so Ralph has to teach her, but the Oz-like King of Sugar Rush wants to stop her, and nog, nog, nog.

Amidst omnipresent product placement (Mentos stalactites, Oreo cookies singing "OReO" like the Wicked Witch's palace guards in formation (the film's one witty pun), a police donut named Duncan, and crowds of candies dancing in stands), spunky Vanellope also seeks approval and acceptance, but this time from her Mean Girls-esque candy car-racing cohorts with names like Taffyta Muttonfudge. Everyone eventually feels fulfilled because brainwashed customers keep playing their video games over and over indefinitely. Funny how Disney executives would like that ending.
Labels: Wreck-It Ralph

Ann said…
I admit, I'll take anything Wreck-It-Ralph-related over that Les Miserables preview that I've seen so many times that I've lost count. Good lord, the self-importance in that thing is downright nauseating. And the movie doesn't come out for another month and a half! How many more times must we suffer through it?
November 8, 2012 at 7:40 PM

The Film Doctor said…
I agree. Perhaps someone in charge of marketing at Universal Pictures figured that a pretentious musical without spoken dialogue might scare off possible viewers, so why not lay on an extra long trailer, so by sheer bludgeoning with hype, we'll want to go. Meanwhile, the music sounds treacly, Amanda Seyfried brings back nightmare memories of In Time and Chloe, Jackman evokes X-Men Origins: Wolverine, and I end up internally howling within the uttermost bowels of hell whenever that trailer comes on.
November 8, 2012 at 11:32 PM