Django Unchained and the representation of slavery 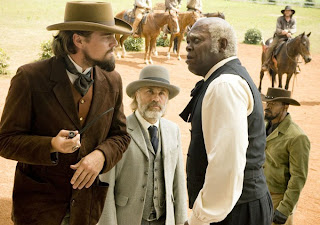 "[The film will] be award worthy if Steve McQueen did it.  It's all a dark and really gritty look at the realities of slavery. So is [Django Unchained]. It's just coached in a spaghetti western/blaxploitation movie/HongKong bullet ballet, but it's as legitimate as that, and ultimately movies should be entertaining." --Samuel L. Jackson

After enjoying much of Django Unchained (when I wasn't asking myself, should I be liking this?), I wondered how to enter the critical fray when I hit upon the nicely detached critical word "representation." Some critics have been understandably offended by the movie while others applaud Tarantino's willingness to engage with the difficult subject of slavery. Is Django Unchained "ethically serious" as A. O. Scott puts it, or does it exploit the sufferings of slaves for cheap sensationalistic entertainment? Tarantino appears to do both simultaneously. The director/writer takes an image such as a slave torn apart by dogs, or a band of horseback-riding men wearing masks and carrying torches, and then he finds ways to further complicate our responses by adding on layers of satire or cheesy spaghetti western film technique (abrupt zooms) or allusions to loaded movies such as Griffith's innovative but racist The Birth of a Nation (1915). Should one make jokes in sharp juxtaposition with the representation of the degradation of a slave? Does the subject demand a serious respectful treatment, especially given the way Americans still have not fully come to terms with slavery?

I don't know the answers to these questions, but I find it useful to compare Django Unchained with Pulp Fiction (1994), especially Samuel L. Jackson's roles in both films.  The quintessential scene of Tarantino's career is still the one where his hitman character Jules Winnfield [Jackson]says these words that he claims come from Ezekial 25:17:

"The path of the righteous man is beset on all sides by the iniquities of the selfish and the tyranny of evil men. Blessed is he, who in the name of charity and good will, shepherds the weak through the valley of darkness, for he is truly his brother's keeper and the finder of lost children. And I will strike down upon thee with great vengeance and furious anger those who would attempt to poison and destroy my brothers. And you will know my name is the Lord when I lay my vengeance upon thee."

Then Jules and Vincent (John Travolta) summarily execute several drug dealers in their apartment. This delightful equation between revenge and old testament judgment, what others might call the Law, characterizes much of Tarantino's work. It helps dramatically justify the slaughter of villains (as in Inglourious Basterds (2009)). It makes Jules look oddly ethical even though he later admits that "I just thought it was a cold-blooded thing to say to [someone] before I popped a cap in his ass," but Pulp Fiction often entertains these ethical conundrums where gangsters humorously meditate on questions of retribution. Both Pulp Fiction and Django Unchained concern an African American and a white guy teaming up in the classic Huckleberry Finn American dream of racial friendship. In both films, Tarantino has the (spoiler alert) white guy die, leaving the possibility for the African American's redemption and triumph at the end, especially since Jules considers walking away from his criminal world altogether. Pulp Fiction's tightly interwoven time-reversing structure also calls attention to Django Unchained's sloppier story configuration. My friend was bothered by the way the movie was unnecessarily elongated with two climaxes, not one, with an unlikely twist that makes the film far less plausible (with Tarantino appearing in a minor role as if to distract us from the structural flaw). 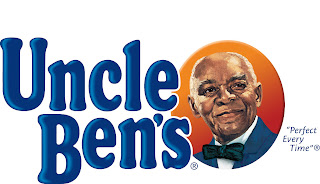 Meanwhile, what has happened to Samuel L. Jackson in Django Unchained?  Now, he's playing Stephen, the most despicable head house slave of Calvin Candie's (Leonardo DiCaprio) plantation, an Uncle Tom figure who looks exactly like the Uncle Ben of Uncle Ben's rice, a man who oppresses other slaves by incorporating within himself all of the loathing of his master.  Stephen appears in the movie by exclaiming "What's that nigger doing on a horse?" when Django (Jamie Foxx) rides up with Dr. King Schultz (Christoph Waltz) along with Calvin and his entourage. Tarantino manages to find subtle ways to complicate Stephen's character by hinting at Stephen's small rebellions against his master (he appears to forge his master's signature on a check, for instance), but Stephen is still a drastic change for Samuel L. Jackson, and I wonder how much he enjoyed playing this minstrel-like character (like Aunt Jemima), a man who must act the way whites wanted to perceive African Americans at the time.

So, I guess the larger question of the movie boils down to this: does Django's final revenge against all of the figures of oppression of Calvin Candie's plantation aesthetically justify scenes in which slaves are degraded beforehand? Are the semi-ironic, self-aware, and cheesy film techniques of the spaghetti western appropriate for this subject matter? Can Tarantino convey outrage over the injustices of slavery and joke about it too, often within the same scene? The film evokes the complicated representations of slavery in Herman Melville's "Benito Cereno" (1855), but whereas that story gives the reader time to examine the underlying assumptions of its characters, Tarantino's movie may be too busy entertaining the viewer to adequately question the moral quandaries that it raises.
Labels: Django Unchained

Craig said…
See, I didn't interpret the forged check as rebellion; I took it to mean that Stephen was complicit with him, that he and Candie were essentially one and the same. This seemed validated later in the scene in the study, where they talk in private man to man; you could even argue that Stephen, who is casually seated having a drink, has the real power.

I liked most of the first hour of Django Unchained, but hoo boy did it trainwreck after that. (Carrie Rickey said: "When the movie reaches Candieland you can feel the oxygen go out of the theater.") I'll limit my problems to just one (and I've expressed this elsewhere, so please excuse the redundancy): Tarantino, for the first time in his career, gets bogged down in plot details (all the convoluted, unconvincing nonsense involving somebody named Eskimo Joe), when the gravitational pull of the story is the tension between Django and Stephen. That's about freedom vs. power, working outside the system vs. manipulating it from within. That idea was what fascinated me, and I'm surprised it didn't seem to interest Tarantino, who after raising the subject quickly dropped it. As a result, Django for me comes across as facile and scattershot.
December 29, 2012 at 11:43 AM

The Film Doctor said…
Thanks for your thoughts, Craig.

I like your point about Django and Stephen. I was more bothered by Tarantino's various contrivances to (spoiler alert) get Django away from Candieland so that he can return triumphant at the end of the movie. I've heard since that Tarantino was following a genre convention wherein the hero must reach an epic brutalized low before his final comeback (as Clint Eastwood suffers in A Fistful of Dollars). I wonder if 90% of everyone's problem really boils down to our issues with accepting Tarantino's love of the spaghetti western. As a genre, it's too operatic and parodic for such a weighty and sensitive subject.
December 29, 2012 at 1:42 PM

The Film Doctor said…
I haven't seen Charley Varrick, but from what I can learn offhand, that film provided the lines "pair of pliers and a blowtorch."

Richard Bellamy said…
I wasn't shocked by this film. I wasn't bothered by the depiction of slavery in a comic parody. The character of Stephen is an interesting one, as you and other viewers have pointed out. He could have been a compelling one, but he came off as mostly ridiculous. If Tarantino had wanted to present the serious issues of race that some viewers are attributing to this film, he should have toned down the ludicrous parody. If he just wanted to make ludicrous parody, then he succeeded. There is very little in this film that is very shocking, significant, compelling, or effectively dramatic - as for the ludicrous parody, it goes on way too long.
December 29, 2012 at 4:21 PM

We can respectfully agree to disagree. I found the movie to be significant and provocative, and I always like to parse the many cinematic allusions of Tarantino's work (is that really a variation on Taxi Driver's gun in Schultz's hand in the climactic scene?) The movie is reminiscent of John Leland's major point in Hip: The History: much of American culture comes from the often parodic interplay between races that began with the arrival of West African slaves. Samuel L. Jackson claims that Tarantino "thinks that he's black." The film is highly unusual in the way that it shows, in A. O. Scott's words, "regenerative violence visited by black against white instead of the reverse," something rarely seen in a Hollywood production.
December 30, 2012 at 9:02 AM