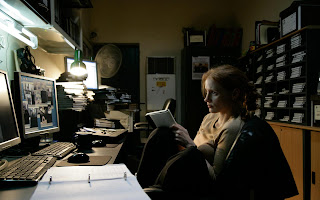 ---"Control of thought is more important for governments that are free and popular than for despotic and military states. The logic is straightforward: a despotic state can control its domestic enemies by force, but as the state loses this weapon, other devices are required to prevent the ignorant masses from interfering with public affairs, which are none of their business…the public are to be observers, not participants, consumers of ideology as well as products."  --Noam Chomsky

---"To me, Godard did to movies what Bob Dylan did to music: they both revolutionized their forms." --Quentin Tarantino

---the evolution of the Bond trailer

---"Like everything we do here, the design process at Criterion starts with the film."

---"Essentially Best Buy is like an animal in a trap: it has to chew through its own leg fast enough to escape with its life. Most of the category killers that have come to this impasse haven’t been able to do it. Which is why you can no longer pick up a movie at your local Blockbuster."

---filmmakers hanging out together

---Jon Stewart and the war on Christmas

---"The widening ability to associate people's real-life identities with their browsing habits marks a privacy milestone, further blurring the already unclear border between our public and private lives. In pursuit of ever more precise and valuable information about potential customers, tracking companies are redefining what it means to be anonymous."

---"the cybermob failed to silence me" --Anita Sarkeesian

---trailers for Sound City, Oblivion, Confession of a Child of The Century, Blancanieves, Downloaded, American Mary, The Girl, Star Trek into Darkness, In Vogue, The Editor's Eye, and Upstream Color

---"Bigelow, the first and only female director to win an Oscar, knows something about being a woman in a macho environment. Her films have rarely focused on female protagonists, and it’s hard to avoid the possible parallels between her and Maya. Beyond that come the bigger questions signified by Maya’s presence in that room. Does a society that produces female CIA agents (and reelects a black president) gain the right to commit atrocities in its own defense? Is torture justified if the torturer is a university-educated woman, and the tortured a bigoted Muslim fundamentalist?"  --Andrew O'Hehir

---"Kathryn--it was really important to her to not take any political stand.  She did not want to make a propaganda film" --Jessica Chastain

---"Zero Dark Thirty doesn't explicitly say that torture caught bin Laden, but in portraying torture as one part of the successful search, it can be read that way." 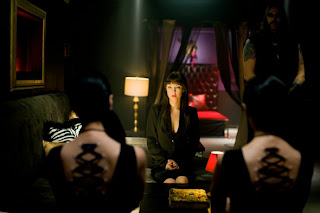 ---"If you want your country to rule the world as an aggressive and militaristic empire, then accept the inevitable consequence of that: that there will be huge numbers of people in the world who resent and even hate your country for that behavior. Don't cheer while your country constantly kills, invades, occupies, and dominates the internal affairs of countless other nations - and then expect to be liked. Immorality aside, producing this reaction is one reason not to do such things. This kind of imperial behavior, inevitably and in every era, generates extreme levels of animosity and, ultimately, returned violence." --Glenn Greenwald

---"In March, 1917, while walking on Broadway, Buster Keaton bumped into a friend from vaudeville who happened to know Fatty Arbuckle, the famous silent movie comedian and Chaplin’s rival. Asked if he had ever acted in motion pictures, Keaton said no, and was invited to drop by Arbuckle’s studio on 48th Street the following Monday. Keaton first declined, because Arbuckle had stolen one of his vaudeville routines in the past, but then changed his mind because his curiosity was piqued by the opportunity to see how movies are made and especially how the gags are filmed."  --Charles Simic
Labels: Notable film and media links war on Christmas