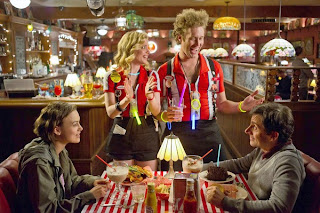 [Note: I tried to avoid bad movies this year, but some proved painful just the same. Things I learned: beware of cute dogs, Colin Farrell, and Taylor Kitsch.]

This meta-pseudo-Tarantino doodle dithers in the desert. Will the eccentric psychos finish their screenplay or shoot each other? Christopher Walken talks to himself on a tape recorder. Tom Waits emotes with a rabbit.

8) Seeking a Friend for the End of the World

Thankfully, everyone will die.

Smart-ass Snow (Guy Pearce) must save a princess, I mean the US president's daughter (Maggie Grace), from an outer space maximum security prison overrun by demented convicts. Since they are all out in space, who cares?

Colin Farrell's character Douglas Quaid does not know what the hell he's doing in this ersatz Blade Runner multi-ethnic cityscape, saying things like "If I'm not me, then who the hell am I?" and "Everyone seems to know me but me," even though he incongruously possesses a kick-ass secret agent skillset such as the ability to quickly bloodlessly PG-13 kill a roomful of anonymous jackbooted riot police masked goons, fly jet-cars, and evade a comely Kate Beckinsale (alias Lori Quaid) who made me giggle with every appearance she makes as the angry villainess.

Tom Cruise slithers around like a 48 year old variation of a 25 year old Axl Rose, wearing fake tattoo guns stuck in his leather pants, drinking scotch with an underpaid baboon named Hey Man. In the lower circles of hell, I can see people grooving to this rockin' Gleepocalyptic answer to '80s anthemic power ballads.

Truly, the Pit.  So bad I couldn't even review it. Edgar Allan Poe's immortal prose treated with all of the sensitivity and psychological nuance of a razor-edged pendulum abruptly sawing some slob in half.

As people expire dappled with PG-13 hints of blood, Battleship raises a question: how much tragic grandeur can one extract from a 131 minute military advertisement based on a board game? The movie's unholy conflation of Hasbro and the US Navy makes sense. They both just want to show off their toys.
Labels: 10 most disliked films

Jason Bellamy said…
As you know, I was touched by No. 8.

The only other one on this list that I've seen is No. 2 (ahem) ... and it was honestly just yesterday that I suddenly remembered THE RAVEN existed and that I'd seen it.
December 11, 2012 at 6:52 PM

Richard Bellamy said…
Good list. I agree with many, but Battleship is one of my favorites of the year - it's a fun ride. Also, I loved Seeking a Friend

My least favorite movies of the year were Contraband, The Eye of the Storm, The Avengers, The Amazing Spider Man, Killer Joe

Amir said…
I haven't seen 9 of the 10 films you've listed, because I assumed without watching them that if I were to compile a list like yours, they would land right on it, so I passed.

The only film I've seen here is Seven Psychopaths, which was my most anticipated film of 2012, but sadly, if I were to compile a list like yours, it would land right on it.
As would Cabin in the Woods, which I found equally underwhelming.
December 12, 2012 at 1:57 AM

Rick said…
While sublimally hidden in too many explosions and Gung-Ho antics, there is a very interesting political subversive element in Battleship. Pay close attention to a couple of key scenes and you'll see the aliens are not the bad guys. I think director Peter Berg actually got away with some strong criticism on U.S. international politics in this one. Again, blink and you'll miss it, but it's there.
December 12, 2012 at 2:22 AM

I had difficulty remembering The Raven too. While watching that film, I would just as soon avert my eyes to retain my admiration for John Cusack.

I never could sit through any of the Lord of the Rings series, so I may just skip The Hobbit altogether. Peter Jackson's blitz of media promotions (innumerable videos diaries of the making of the film, etc.) seems like plenty anyway.

Yes, Amir, Seven Psychopaths suffers in comparison to In Bruges. I wonder if writer/director McDonagh got stuck midway through writing Seven, and then tried to turn that difficulty into a meta-joke.

Is it possible to advertise the Navy and then critique US international politics in the same movie? Peter Berg happened to play the dupe in one of my favorite movies--The Last Seduction. Did you see Peter Berg pitch Coke Zero? "It's actually really good. I swear to God."