As the World Trade Center turns: Oliver Stone’s take on 9/11 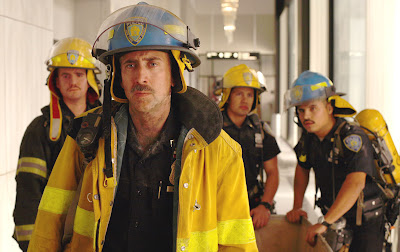 Oliver Stone made some ambitious films in the past that were often marred by their manipulative overkill. He started his career by writing Midnight Express, a lurid depiction of an American trapped in a Turkish prison that was so extreme, it was inflammatory and paranoid, yellow journalism masquerading as entertainment. While later films such as JFK and The Doors had a fun, freewheeling sixties aspect, Stone’s Natural Born Killers again went too far, this time in its depiction of the joys of killing people. While he’s more willing to take risks than most directors, Stone has difficulties maintaining some artistic restraint. By the time he directed the epic flop Alexander, I figured that Stone’s career was largely over. When he made World Trade Center (2006), Stone tied himself to the largely true-life story of two port authority policemen trapped for 24 hours in the rubble of the seems so chastened by the material, the film comes off as annoyingly grandiose therapeutic melodrama.

Of course, any film that deals with the events of Sept. 11th has a kind of built-in blackmailing device for critics. Can one dare to say anything against a stirring, emotional tale of ’s sacrifice, especially one that dwells on the heroism of the working class men, the policemen and the firefighters who were involved? Given the delicacy of the subject matter, the sense that any treatment of those events touch on an open wound on the national psyche, a filmmaker need only depict the twin towers standing innocuously on the city’s skyline to affect the viewer.

The beginning of the film does just that, showing the unusually warm dawn of September 11th as New York City begins to awake, and no one knows what’s about to hit. And for awhile, Stone sticks to the events in chronological order, immersing us in the lives of the port authority policemen Will Jimeno (Michael Pena) and Sergeant John McLoughlin (Nicolas Cage) as they get the call to go help with the evacuation of one of the World Trade towers. We quickly learn that both are devoted family men. McLoughlin looks in on his four children before driving his hour and a half commute to work. Jimeno jokes around with his fellow officers in the locker room as they get in uniform. By sticking strictly to their often confused point of view, Stone achieves some of the ironic effects of Greek tragedy. Jimenez does not understand the significance of the shadow of the low flying jet washing over him. At first, the police think that a private plane accidentally flew into the first tower, as they watch the news, and McLoughlin is all business as he makes sure they have enough oxygen tanks before heading up.

At that point, while they are walking around the concourse, the building abruptly falls on top of them, and in many ways the narrative stops dead. In comparison to the relentless pacing of Flight 93, World Trade Center lingers around for twenty four hours as both men remain trapped under concrete and rubble, talking to each other, as Stone predictably cuts back to their wives and family freaking out in their suburban homes. While Flight 93 moved quickly toward the jet passengers’ resolution to take on the hijackers, the new film lollygags and soul-searches until only Michael Pena’s occasional jokes about imitating Starsky and Hutch as a kid by arresting his sister barely alleviates what otherwise turns into a drearily conventional disaster drama. While both men suffer from thirst, Pena dreams of Jesus appearing with a water bottle, and his goofball remarks about it to the mournful Nicolas Cage provided some of the few sparks of whimsy in the film. Even the darkest stories need some humor, some subversive playfulness to show that side of the human spirit, but Stone keeps cutting back to the concerned wives either as they wait or in flashbacks as virtuous McLoughlin remembers showing his son how to saw a block of wood.

The movie has its powerful moments, notably the image of the firefighters from as far away as bonding together to pull victims from the smoking rubble, but as a whole, the film lays it on too thick, continually telegraphing emotions to the audience. As the portentous piano soundtrack plays the same little tune, the TV repeatedly shows the buildings fall, and as the families weep, WTC betrays how the most carefully researched slice of life-story can still come off as soap opera. The real-life McLoughlin and Jimeno deserve better than that.