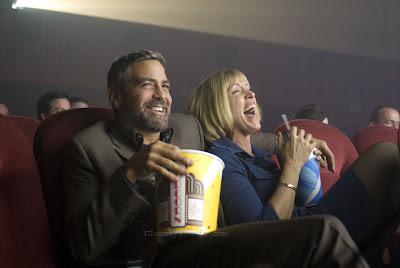 Instead of being amused, I was filled with alarm after viewing Burn After Reading because of the fun-house mirror the Coen brothers hold up to its predominantly white middle-aged audience. Twice in the film, the characters watch a fake film called Coming up Daisies starring Dermot Mulrony and Claire Danes. When the characters laugh at the same bad joke, I realized that those scenes grimly satirized me and everyone in the theater. Then I thought of the creepily quiet, studied way the Coen brothers accepted their Oscars earlier in the year for Best Director and Best Picture in relation to No Country for Old Men. What do they think of us, their audience? What kind of contempt fills their vision of grasping, insufficiently famous Americans? It is a source of great and terrible wonder.

How do the middle-aged appear in this film? Let me count the ways:

1. Body obsessed. Frances McDormand’s character, Linda Litzke’s chief motivation for her noir skullduggery is the hope of funding extensive plastic surgeries for her face, legs, butt, and belly. She also works at . One can only imagine why McDormand’s husband, Joel Coen, puts her into such sad demeaning roles. Meanwhile, Harry (George Clooney) can only think of running five miles after loveless sex with his various paramours.

2. Only capable of drinking bottled water. (Brad Pitt) blanches at the thought of drinking “ swamp water” in the midst of one scene when he should concentrate on the act of blackmailing.

3. Mechanical. spends much of the film flailing about in a frenzy of mechanized motion, but then everyone seems prey to joyless repetitive action.

4. Stuck in a loveless, adulterous marriage. As Katie (Tilda Swinton) seeks exit from her crappy marriage with Osbourne (John Malkovich), Harry seeks the same from his marriage to children’s book writer Sandy (Elizabeth Marvel). Perhaps unsurprisingly, Katie and Harry sleep with each other.

5. Desperately single. Using a Match.com-like dating service, Linda sleeps with various married men after meeting them in a park, eating dinner out, and going to the same inane movie (Coming Up Daisies). Bleakly, after sad mechanical sex, and after the man passes out, she searches through their wallets to learn of their adultery. Ironically, Ted, the manager of , (Richard Jenkins) pines after Linda to no avail.

6. Sex-obsessed and paranoid. George Clooney effectively lampoons his own seductive charm by grinning his way through several loveless romances and building a dildo-enhanced mechanical chair—a concise symbol of his character Harry’s empty life. Harry also becomes increasingly paranoid that some combination of the alphabet soup (CIA, FBI, etc.) is after him.

7. Desperately angry. Osbourne Cox (Malkovich) rants against CIA officials, his wife, his blackmailers, and ultimately the entire world of morons until he attacks his old Brownstone with a hatchet. Meanwhile, when her plans do not bear fruit, Linda reacts like a cornered rat. She proves willing to sell out anyone and anything, even her country, for her plastic surgery.

In dramatic contrast to, say, The Great Lebowski, no one proves the tiniest bit sympathetic in this film, except for one oddly agreeable CIA official played by Juno’s dad J. K. Simmons. Everyone else is grasping, superficial, and soullessly loathsome. One could call Burn After Reading a comedy, but I found it too grim a portrait of middle-aged drift to do anything but go home filled with nameless dread.

Dead Pan said…
I really like the way in which you wrote this review. It is a really interesting look at what the Coen's are probably, at least somewhat saying with Burn After Reading. I also found it hilarious with JK Simmons in the end kind of commenting on how the audience probably feels at this point, it was on the edge of brilliance.
September 17, 2008 at 1:51 AM

The Film Doctor said…
Thanks, Dead Pan. Ultimately, the Coen brothers do not seem all that interested in fleshing out the full humanity of their characters in Burn After Reading. That may suit the brothers' satirical agenda just fine, but I was reminded of Frances McDormand's character as the concerned mother in Almost Famous. In that film, she's far more sympathetic and likable, as is true for her role in Fargo, for that matter. The characters in Burn After Reading remind me of flies with their wings torn off. It might be fun to watch them twitch, but they are lacking something.
September 17, 2008 at 5:05 AM

Dead Pan said…
I can definitely agree with that, but I would say as far as satire goes, the film works, but as far as human drama goes the film falls flat. The films most sympathetic and well rounded character to me was Richard Jenkins.
September 19, 2008 at 1:52 AM

Ed Howard said…
Who says movie characters have to be sympathetic anyway? I thought the film's satire of inane desires (a "hard body," a lover, some manufactured excitement) dovetailed beautifully with its parallel satire of the American intelligence apparatus. The goals of the government -- keeping the populace docile and uninformed -- are well-served by the attitudes and concerns of the people in the film, who are all too happy to stay docile and ignorant as long as their simplistic desires are fulfilled.

Humanity doesn't really enter into the picture, nor does sympathy. It's a bleak essay-film made with blindly flailing mannequins.
November 4, 2008 at 1:42 PM

I've been rewatching Ace in the Hole recently, and certainly Chuck Tatum and Lorraine Minosa are not sympathetic, yet they still seem to me more recognizably human than the middle-aged mannequins of Burn After Reading, who prove disposable by the end of the film, with the CIA flushing them out of the storyline. Their characters ultimately lack resonance for me as a result.
November 5, 2008 at 9:29 AM