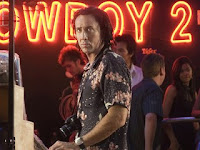 Back in 1999, the Pang Brothers directed the original Bangkok Dangerous in Bangkok after pitching New York Gritty, Chicago Windswept, Hong Kong Crowded, and New Orleans Stormy to various Hollywood studio executives who proved to be less than impressed. I guess Nicolas Cage, flush from the success of the National Treasure films, liked their work, so now Lions Gate has dumped the movie into the smelly armpit release date of post-Labor Day weekend.

IMDB reports that Oxide Pang started off as a colorist, which makes sense since he saturates much of in dark blue and green with filters. The film begins much like the noir classic Blast of Silence (1961), with a hit man Joe (Cage) in brooding in voiceover over his solitary professional existence. When he’s not running up to windows to shoot at people, he sits sadly in restaurants, and he lives by four rules which go something like this:

2) There’s no such thing as right or wrong.

4) Know when to get out. Erase every trace.

Naturally, Joe breaks every one of them. I generally like hit man films since there’s a kind of perverse logic in cheering on someone who surgically does what he can to control population growth. Like bank robbers, hit men have simple missions in life that leave them admirably stream-lined in their goals. In Bangkok Dangerous, however, Cage makes for a singularly dour killer, and his current dyed black hair is cut just long enough to emphasize his male-pattern hair loss. I imagine Cage means to look cool, but he comes off as mostly depressed, jaded, and morose. His former soulfulness in films like Moonstruck and Leaving Las Vegas has congealed into a glum middle-age. Once he strikes up a relationship with a charming innocent-eyed deaf and dumb Thai pharmacist Fon (Charlie Yeung), Joe does smile once or twice. He also befriends an unlikely young hustler (Shahkrit Yamnarm) that he initially means to dispose of. Then, unaccountably, he decides to teach the hustler to be a hit man too because, as he comically says in voiceover, “When I looked in his eyes, I saw myself.” Thereafter, the film includes some training session montages in which Joe and his disciple shoot at melons to give the younger audience a sense of empowerment.

After that, I might have nodded off, but I believe there’s a shoot-out in a dark bottle factory, a botched JFK-esque assassination attempt of a politician waving in a convertible in a parade, and a boat chase scene reminiscent of a Roger Moore’s Bangkok escape in The Man with the Golden Gun—all action clichés filmed in ABC movie of the week style with cuts to Thai girls gogo-ing in a crowded disco to keep things lively.

As the Pang brothers strive in vain to emulate Coen brothers noir, Cage seems willing to endure any indignity just to have a starring role in a nation-wide release. He may think he’s maintaining his bad-ass recalcitrance, but instead he comes off as a midlife crisis staring out woodenly on cinema screens. Call it Bangkok Catatonic.