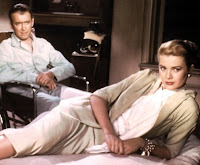 In her New Yorker's incisive take on Hitchcock's masterpiece, Campaspe of Self-Styled Siren claims "The real question of Rear Window isn't about the morality of looking, it's about the ethics of intervention." In a city where any kind of privacy is difficult to maintain, Hitchcock explores the price you pay for acting on what you should not have seen.

The Cineaste Critical Symposium discussing "Film Criticism in the Age of the Internet" has been much linked to already, but as a relatively new blogger, I found the session invaluable both in terms of learning about the pros and cons of blogging about film, but also in the way the symposium pointed out some of the best critics on the web. I didn't know, for instance, the level of critical respect girish earns and enjoys. For a skillful summary of the Symposium, check out P. L. Kerpius' post on Scarlett Cinema.

Somewhat along the same lines, Vin Crosbie of digital deliverance extensively analyzes why so many people have shifted to on-line websites for their information, and why newspapers have had such a hard time adapting to changing media technologies.

The House Next Door has posted a fascinating reassessment of Brian De Palma's career by Michael K. Crowley, who points out, "De Palma remains one of the most prolific, poorly understood and controversial directors in the history of cinema." I can remember Pauline Kael's enthusiastic response to Dressed to Kill way back in 1980, so it's nice to see De Palma's oeuvre reconsidered.

Writing for Ferdy on Films, etc., Roderick Heath continues his engaging Famous Firsts series with his discussion of George Lucas' first feature-length THX 1138. As he points out, "Despite the scifi trappings, THX 1138 has an interior, alienated texture pitched to echo a counterculture atmosphere; it feels like an illustration of a Bob Dylan lyric, like “Visions of Johanna,” or a Borgesian labyrinth tale, with its haiku-spare vignettes and images, and echoes of vast cultural arguments going around in circles."

Writing for Film Studies For Free, Catherine Grant has found some interesting Godard-related links, from YouTube clips to podcasts of the 2001 For Ever Godard conference in the Tate Modern museum in London.

Writing for The Dancing Image, Movieman0283 struggles valiantly with the many mysteries of David Lynch's Inland Empire.

Lastly, Matthew Dessem's blog makes me jealous. Who wouldn't want to write about every movie in one of the few signs of God in this dark age--The Criterion Collection? I especially enjoyed his essay concerning Frederico Fellini's under-appreciated Nights of Cabiria (1957).
Labels: Notable film and media links

Catherine Grant said…
Thanks a lot for the honorable mention in your dispatches. More good podcast/videocast updates will follow on Film Studies For Free in the next day or two.
September 12, 2008 at 12:33 PM

P.L. Kerpius said…
Thanks for the shout-out Film Doctor! I'm glad you enjoyed my post, even if my name isn't "P.S."

The Film Doctor said…
You are welcome, Catherine Grant.