Cinderellas in their 40s in the Big Apple: Sex and the City: The Movie Version: a review/interview 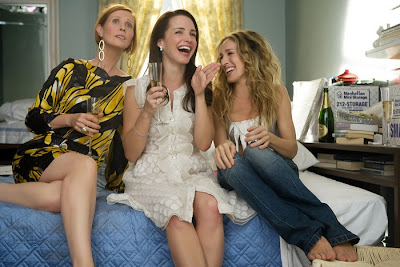 Back in June 2008, when this blog was just getting started, I was dissatisfied with my review of Sex in the City: The Movie Version because I felt that I just didn’t get the film’s fundamental appeal to women. So I asked a long-standing devotee of the television show if she would mind being interviewed about the movie. She graciously accepted, and this interview took place in a Tarantino-esque coffee shop near Surfside Beach, South Carolina.
Him: The Sex and the City HBO show favored the single woman’s perspective, giving a hip feminist twist to the search for romance in the city. The show went on for six seasons, with much of it tracking the many ups and downs of Carrie and Big’s relationship (i.e. Sarah Jessica Parker and Chris Noth) As Big, Noth is a sort of aristocratic, rich, handsome, but also unreliable hunk, a kind of 21st century Heathcliff. Meanwhile, the three friends, the nympho blonde Samantha, the ultra-preppy brunette Charlotte, and the more angst-ridden lawyer redhead Miranda had numerous romances or just hook-ups in turn. No matter what sexual deviancy served as a theme for each show (urination, threesomes, talking dirty), the ladies could always regroup, drink Cosmopolitans, and restore themselves with their camaraderie. Men were often deplored and/or lusted over, but ultimately they proved secondary to the four-way friendship. What did you like about the film?