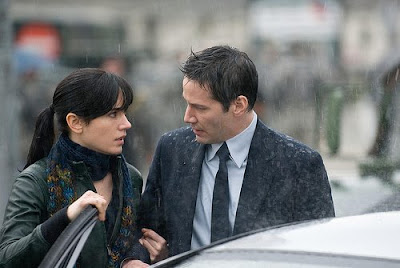 1) Let’s start with accuracy. As far as I could tell, the earth never does stand still in The Day the Earth Stood Still.

2) In the classic 1951 version of The Day the Earth Stood Still, an alien shows up on earth with his robot to tell everyone that we need world peace or aliens will destroy us. In the 2008 version, Keanu Reeves shows up to tell Jennifer Connolly that humans must be eradicated for the planet’s survival.

3) Jon Hamm appears briefly to remind us that we should have watched Mad Men instead.

4) A large green glowing sphere hurtles towards the planet Earth. You can tell things are tense because some federal agents kidnap astral-biologist Helen Benson (Connolly) so she can work with other scientists in trying to figure out what to do about this Armageddon-esque asteroid(?) that’s going to hit in about 78 minutes!

5) Fortunately, the thing slows down and lands peacefully in . In a Close Encounters of the Third Kind moment, Helen almost shakes the hand of an alien who appears in a glimmering sheen of light, but then naturally some trigger-happy soldier shoots the alien. Then a tall, one-eyed robot appears out of the globe to turn off all of the machinery in the area. The robot looks quite retro in a pulp comics way. Increasingly, I had a hard time taking this film seriously.

6) Other globes land around the world in a fashion reminiscent of Independence Day.

7) Kathy Bates takes command as Regina Jackson, the woman in charge of the government once the president disappears into some secure bunker. She’s concerned about how the aliens have probably learned all of the ’s military secrets from a satellite.

8) After a surgeon peels away the placenta-like glop from the alien’s skin, it turns out that the alien Klaatu is . . . Keanu Reeves! After the cheesy image of the robot, the casting of Reeves is the second major mistake of the filmmakers (by the way, director Scott Derrickson also made Hellraiser: Inferno). I never could believe Reeves is anyone but Keanu, no matter how expressionless he looks in a suit, and no matter how many pithy lines he speaks. When the scientists ask him what he was before he was human, he replies, “Different.”

9) Then, in an extraordinarily unlikely maneuver, the sinister officials reminiscent of The Man Who Fell to Earth leave Klaatu alone with an interrogator so that the alien can use some mind-meld powers to escape the compound. He eventually appears in a train station so that Derrickson can refer to Hitchcock’s North by Northwest.

10) Klaatu meets up with Helen and her overly cute African American adopted son Jacob (Jaden Smith of The Pursuit of Happyness). Probably nobody intended this at 20th Century Fox, but I could not help but be grimly reminded of the interracial family adventure dynamics of .

11) As Klaatu, Helen, and Jacob run from the military and the police, we get to know their car, a cute silver Honda. This product placement struck me as oddly similar to that of Edward Cullen’s Volvo S60R in Twilight. If that wasn’t enough, Klaatu stops by a McDonalds to discuss the fate of the earth with some other alien in a human’s body. This alien says he can’t help but love these humans, God bless ‘em.

12) Basically, the film is an extraordinarily wishy-washy treatment of a contemporary apocalypse. While Children of Men had a very simple yet effective premise—no more babies, and excellent use of mise en scene to convey its sense of a sterile world, TDTESS mostly relies upon random television news footage to remind us that people across the world are freaking out about those green globes. In Children of Men, Theo and Kee take refuge with Michael Caine’s character, the hippie political cartoonist Jasper, where Theo smokes dope. In TDTESS, the gang takes refuge with John Cleese of all people, where they listen to Bach. Klaatu says “It’s beautiful,” as he begins to understand in his alien way that people are not all bad.

13) Reeves can play God all he likes, but no one likes a wimpy indecisive sense of divine judgment. I prefer films in which the threat to humanity is remorseless and cold. With over-population, humans are likely to have a die-off just like other species, and I don’t foresee much mercy when that happens. TDTESS also flirts with the possibility of a peak oil meltdown, but never (spoiler alert!) really delivers on anything. While the first TDTESS served as a kind of parable, the 2008 TDTESS just dithers with its darker implications.

15) What is TDTESS’s real threat? Watching poor Connolly plead “We can change!” over and over? Seeing insufferable Jaden Smith weep over his lost daddy? I would say forcing the audience to sit through the obvious CGI murky grey particles as they swarm around in the film’s climax.

16) Like a rusty old Chevy, TDTESS keeps trying to fire, keeps trying to fill me with wonder over its Spielbergian lighting effects, its mists, and its ominous pronouncements, but the film ultimately left me wondering the most about the chain of studio compromises that led to this overbaked Christmas turkey.

Dead Pan said…
I was hoping this wouldn't happen. I actually like Derrickson, he directed The Exorcism of Emily Rose and has worked with Wim Wenders quite a bit. While I was interested, it has been waining a lot with what everyone's been saying about the film.

I'm not familiar with Derrickson's work, but I wouldn't be surprised if he was overwhelmed with the scale of TDTESS and the studio pressures. Aside from the writing and the retro robot, the casting of the film was a large part of the problem, because the people they chose kept throwing me out of the film. How could anyone not recognize John Cleese?

This remake seems more dated than the original. The first TDTESS had the new nuclear bomb and the Korean war for resonance. This new version can't make up its mind what topical subject to refer to--peak oil? Environmentalism? Overpopulation?
December 15, 2008 at 8:21 AM