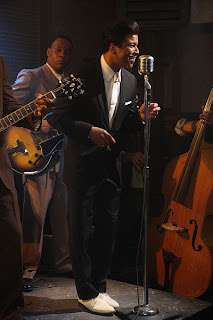 1) Written and directed by Darnell Martin, Cadillac Records mostly succeeds because of its subject matter. I have heard of the Beatles' and the Rolling Stones' near-worship of Muddy Waters, Howlin' Wolf, and other rhythm and blues pioneers on the Chess Records label, but no one (to my knowledge) has tried to dramatize this story in a major release film. Even though the finished product bears a strong resemblance to Dreamgirls' depiction of early Motown, Cadillac Records acquaints us with the intersection between Mississippi blues and the burgeoning record industry of the 40s, 50s, and 60s, and that period's oppressive atmosphere of institutionalized racism helps the film avoid some of the cliches of rock and roll biographies.

2) The film has a nice design sense. The opening montage blends together Chess record labels, Cadillac logos, and early Cadillac cars until that ultimate travesty--the atrocious Cadillac Escalade appears, as if to highlight the product placement. (Why would Cadillac make yet another SUV that looks no different from any other except for the shiny hubcaps?) Otherwise, I can fully understand why everyone fetishized the earlier Cadillacs.

3) Cadillac Records does have its problems. Since it compresses about 16 years into its story arc, the film tends to telegraph upcoming conflicts in obvious ways. Muddy Waters (Jeffrey Wright) asks his harmonica player Little Walter (Columbus Short) to drink some alcohol after Walter learns of his mother's death. The camera follows the flask as if it is the portent of doom, and so it proves to be. The screenplay has the breathless rush of hitting one high point after another that never allows the actors to breathe much within scenes, except when they are performing. Scorsese had a similar problem with the nonfiction material of Goodfellas. Otherwise, Cadillac Records moves fast, and keeps highlighting new performers (such as Mos Def as a bemused Chuck Berry) to keep the viewer off-balance.

4) Adrian Brody seems a little too handsome for the part of studio impresario Leonard Chess, but otherwise the performances are consistently excellent. Jeffrey Wright creates a surprisingly watchful and meditative Muddy Waters whose story provides much of the movie's plot. Born and raised as a Mississippi sharecropper, Waters proves an endearingly level-headed early blues star. He enjoys "making the pretty women's jump and shout," but he's also very conscious of the larger race dynamic of the period. He tells Little Walter "We gotta take all that comes. Half the time that's gonna be a bunch of bullshit, so you need to cool out." He's also aware of how Leonard Chess may be taking his royalties for his own enterprises. When acknowledging how everyone's screwing each other in the record business, he says "That's the blues, man."

5) Other stand-out performers include Mos Def, who seems tickled to be playing Chuck Berry, and Eamonn Walker, whose version of Howlin' Wolf is intimidating, authoritive, and oddly moral for a musician. Wolf treats Muddy Waters as something of a sell-out, and it's fun to see Jeffrey Wright stand and look away, acting as if there might be some truth in that claim.

6) Beyonce Knowles shows up late in the film as the blonde trouble-maker Etta James, and she steals every scene she's in. She wins the Warren Beatty prize for skillfully executive producing herself. In every scene, her 1950s print dresses and her blonde do' look so much better on her in a Mad Men way than anything more contemporary. And she gets to play the rock star trainwreck role, complete with the de rigeur heroin near-overdose. Given her moods, Adrian Brody keeps trying to calm her down. Instead of giving in, she yells out "Get me a bottle of gin!" Her histrionics are much more satisfying than her work as the relatively bland Diana Ross-like character in Dreamgirls.

7) In the end, Cadillac Records enthralls not only because of its music, but due to a sense of poetic justice. The combination of Blues music, record technology, and the promise of the American dream integrated the airways, creating the rock and roll revolution as if by accident. Even though Americans were slow to appreciate the longstanding musical genius of Muddy Waters and Chess Records, the Europeans knew it all along. And yet we still need to be reminded just who it was that Led Zeppelin and the Beach Boys were stealing from.
Labels: Cadillac Records

Nice 'Cadillac Records' review! It was definitely an interesting, funny read. My name is Peter Ricci, and I am a college student and writer who currently contributes to 'Too Shy to Stop,' an upstart online magazine focused on culture and the arts.

I found you entry, as it would turn out, while doing research for my own article on the film. My review focuses on how the film's ambitious source material overwhelms the final product, but, as I discovered, it may still be worth a watch.

If you have the time, check it out! I’d love for you (and anybody else who reads this) to read it and comment.