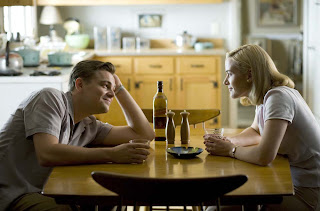 ---Writing for Harper's Magazine, Wyatt Mason tries to understand the difficulty of writing film criticism in his essay "Flailing at Williams":

"Film criticism, it seems to me, is the hardest place to get any serious critical footing. Said another way, because film is a waterfall of particulars so very hard to get a handle on, film criticism most often throws up its hands and claps along instead of coming to grips and terms. It is no accident that one of our wittiest writers, Anthony Lane, is known for film criticism the chief virtue of which is not how probing and deep it manages to be but how dependably entertaining it is."

---For WellMedicated, Andrew Lindstrom compiled an Ode to the Box Art of the one company that is cooler by far than any other--Criterion.

---For Film for the Soul, Ibetolis explores the many meanings of Brazil for his Soul Focus series:

"It's about the will to escape through dream, It's about unrequited love, the quest for the dream woman, the endless sprawling banality of the modern world, the over-reliance of technology and the eventual dehumanising of the human spirit. It's about bureaucracy gone mad, a world teetering on terrorism and state control, mindless consumption and feckless morals, it's Gilliam's 'the modern world is rubbish' in overdrive."

---I like the way some people insist upon a positive response to some films. For instance, Catherine Bennett of The Observer dares to dislike Mamma Mia!, even though, as she says, "there appear to be few doubts among its millions of supporters about the dodginess of any woman who discovers herself to be immune to its life-affirming effects."

---In the same vein, Jim Emerson of Scanners finds that "Critics better love The Dark Knight, or else!" He wonders, if someone doesn't like the film, "what might those consequences be? Perhaps . . . death?!?!"

"Yates’s work is probably most radical in its obsessive treatment of the question of gender. (I suspect that this is where “Revolutionary Road” had the greatest influence on the conception and the narrative argument of the TV series “Mad Men.”) His stories and novels return repeatedly to the weakness and hysterical anxiety of mid-century American masculinity."

---In Film Studies for Free, Catherine Grant lists an excellent A-Z of her "Favorite Scholarly Film and Moving Image Blogs."

---In her list, Grant also includes one of my favorite blogs, Dan North's Spectacular Attractions. His post "Cloverfield's Obstructed Spectacle" shows how J.J. Abrams withheld information in every stage of the film's publicity and in its final product. As he puts it, director Matt Reeves and producer Abrams "ended up co-opting an aesthetic which gleans its power from a paradox--that the ubiquity of images and camera-eye-witness accounts does not make events easier to comprehend of come to terms with."

---Lastly, the 20 actress meme, started by Nathan at Film Experience, has begun to take over the blogosphere. I especially liked the selections at Only the Cinema, The Cooler, Screen Savour, and the inimitable Arbogast.
Labels: notable film links

Ric Burke said…
Hey, thanks for the tag. Plenty of posts for me to check out, as always.

The Film Doctor said…
Thank you, Ibetolis, for the illuminating series on Brazil. I'll put together the 20 Actresses post soon.
December 15, 2008 at 7:31 PM