Besmirched in Oil: notes on Clouzot's The Wages of Fear 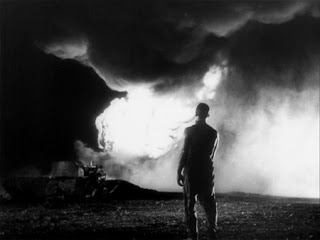 “It’s like prison here. Easy to get in. ‘Make yourself at home.’ But there’s no way out.”

"When we enter the world of The Wages of Fear, we do so by way of an opening shot (later appropriated by Sam Peckinpah for the opening of The Wild Bunch) in which cockroaches are tied together and casually tortured by a half-naked child on an oily, muddy street in the oily, muddy village of Las Piedras. A flavored-ice vendor passes by, and the child abandons the cockroaches to covet treats he can’t afford. But still he has to look, to lust after the unattainable. Once the vendor passes, the child returns to the roaches, but a vulture has already taken his place. With a single stroke, Clouzot has set in motion his primary theme—that men are constantly searching the horizon to the detriment of all else in their immediate world. Men are “goal oriented,” addicted to the “quest,” itching for the “heroic” opportunity. Or so we tell ourselves. Clouzot says no. Men are wanderers. Adrenaline junkies. Mortally terrified of home and hearth."
--Dennis Lehane's "The Wages of Fear: No Exit"

1) In 1953, Henri-Georges Clouzot released The Wages of Fear, a particularly nihilistic and delightful suspense-thriller adapted from a novel by Georges Arnaud. After a leisurely expository opening that depicts the plight of a bunch of expatriate men trapped in poverty and squalor in the fictional South American town of Las Piedras, an oil fire three hundred miles away obliges the American Southern Oil Company to enlist four of those men to drive two trucks full of explosive nitroglycerin across ramshackle mountain roads. If and when the nitroglycerin arrives, then the SOC can use it to put out the fire. Even though they know it is likely to be a suicide mission, men compete for the job and the $2000 pay that may get them out of the country.

2) The Wages of Fear depicts a nice range of debasement, exploitation, and corruption, both political and personal. I like the image of the customs official sitting on his spine and massaging one bare foot on the table as he accepts a ten dollar bribe from Jo (Charles Vanel) to let him into the country. The relationship between the American Southern Oil Company and the natives instantly reminded me of Halliburton's human rights violations. Moreover, Mario is dismissive and rude to the lovestruck bar maid Linda (Vera Clouzot). Mario dumps her in the mud when she tries to appeal to him to not go on the suicide mission. If you work hard and try to get ahead, as Luigi does, then you end up with concrete in your lungs, and a roommate who calls you a "chump."

3) Oddly, insofar as it focuses on a group of expatriates trying to escape a country while hanging out in a bar, The Wages of Fear resembles Casablanca, only without the American patriotism and the love story (quite the opposite). Clouzot calls attention to the similarity by the way he shoots a plane flying overhead, the path of the plane's shadow suggesting the possibility of escape.

4) In this movie made 50 years before this age of peak oil, how did Clouzot know so far in advance just how destructive American love for oil would prove to be? The Southern Oil Company officials cynically view the loss of human life as a natural consequence of their pursuit for profit. Clouzot perfectly emblematizes the negative effects of oil late in the film when Mario and Jo have to immerse themselves and the truck in an oil pool, with Jo getting his leg crushed in the process.

5) The Wages of Fear resembles Deliverance in the way the adventure defines each man's strength, but there's not much heroism for anyone, only each man's relative ability to confront and manage his fear. Mario admits to his fear at the outset, yet he weathers it the best, whereas the older Jo (Charles Vanel) proves a coward under the pressure of the truck drive. Fear wears men down in this film, and even though the classic set piece action scenes may resemble something out of an Indiana Jones film, no one gets to enjoy Indiana's impervious defiance of danger.

6) Oddly, I like the opening scenes in Las Piedras the best, perhaps because of the black and white cinemagraphy of Armand Thirard, perhaps because the squalor is so extreme, and yet there are moments of joy mixed in with the despair amongst the villagers, and the extremity of their hardscrabble existence is so compelling. As Clouzot explained in an interview listed in the Criterion edition booklet:

"The striking setting, the complex human drama, and the terrifying accessory of the truck loaded with explosives allowed me to choose as my target--in a series of episodes linked to each other only by the lonely human characters--not the picaresque narrative but the epic. Yes, an epic whose major key was courage, and its antithesis. Because it's contrast that's at the foundation of my cinematic conception. In the script, as in the unfolding drama, as in the characters, as in the editing, I sought a montage of permanent shock."

Clouzot's extreme, shocking, and despairing vision back in 1953 turned out to be prescient---an accurate picture of the human cost of our current dependence on oil.
Labels: peak oil The Wages of Fear thriller

bd said…
I enjoyed this post exploring the intersection of classic film and current crisis.

We just added this to our Netflix queue.

Ed Howard said…
Interesting thoughts about a very interesting film. I don't know if Clouzot has ever made a film I find wholly satisfying though, and he especially tends to falter with his endings. I love the lengthy suspense sequence that takes up the bulk of the film of course, but the ending has always struck me as rather cheap. After a whole film whose main thrust is about the exploitation of the poor and the suicidal lengths that men will go to for material gains, Mario's ending seems totally disconnected from everything else that has happened, just a cheap shock, one last nihilistic twist.
December 30, 2008 at 1:30 PM

The Film Doctor said…
Ed, You didn't like the ending of Diabolique?

I confess I haven't seen any of Clouzot's other films. I see what you mean about the ending. It has an odd dance of the dead ironic feel, but it is consistent with the nihilism of the film, given that Jo just implied that there's nothing after death. It also makes psychological sense that Mario would feel untouchable after the ordeal and therefore drive badly. I don't know how the original novel ended, but it makes sense to me that the film cannot have a happy ending, and so therefore Clouzot chose this ironic twist.

A nihilistic aesthetic sense can easily produce crappy movies, since it doesn't matter either way. The Wages of Fear holds up well for me because it is so compelling and corrosive at the same time.
December 30, 2008 at 1:50 PM

But things get pretty confused by the end of Le Corbeau, which for most of its length is really taut and morally ambiguous. And Quai des orfevres is saddled with a weird "happy ending" that negates much of the mystery leading up to it -- although in that case at least, Clouzot seems pretty damn uninterested in the actual plot all along, preferring to focus on some of the sideline distractions. I've also seen the documentary The Mystery of Picasso, and really like it, though I'd attribute that mostly to Picasso himself rather than Clouzot's rather straightforward documentation of his drawings.

Anyway, I certainly wasn't looking for a happy ending from Wages, just one that didn't feel so arbitrary and O. Henryesque ironic.
December 30, 2008 at 2:03 PM

The Film Doctor said…
Thanks for explaining your position, Ed. I am just beginning to learn about Clouzot's work, and look forward to more of his movies. I recommend Diabolique as the best French film to give Hitchcock serious competition.
December 30, 2008 at 2:55 PM

Richard Bellamy said…
This comment is late - but I just noticed this post. I LOVE "The Wages of Fear"! Beautiful black and white!

Also, have you seen the critically panned "Sorcerer" - Friedkin's American version of "Wages"? I have to admit I'm a big fan of Friedkin's sprawling remake.
January 19, 2009 at 7:30 PM

Thanks for the comments. I find I can go back repeatedly to The Wages of Fear for the mise en scene alone, but I don't know the Sorcerer remake that well. In Dr. K.'s Super-Spectacular Blog, Dr. K. wrote up a good appreciation of the remake not too long ago.
January 19, 2009 at 8:31 PM