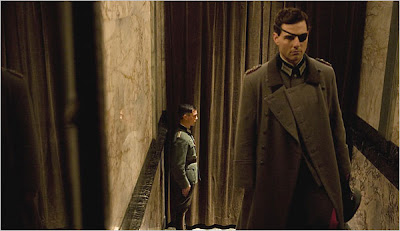 I confess that I couldn't watch Valkyrie except through the lens of Tom Cruise's insecurities. Now that Michael Jackson has been sadly reduced to tabloid fodder and Madonna struggles to avoid becoming grotesque, Tom, that other 80s icon, grows increasingly defensive about his media image. How many other major movie stars have bothered to fashion an elaborate website to reconstruct their reputations, complete with adoring footage from earlier movies and pretentious music (Strauss' "Also Sprach Zarathusta" no less)? The website has to be seen to be believed, proclaiming over and over "Remember what a big movie star I am?" How many others gain notoriety by spouting Scientology dogma in leaked and highly popular videos? Fox of Tractor Facts asked why we tend to revile Cruise so much, and I would answer because Tom comes off as arrogant, especially in vanity projects such as Mission Impossible III. So with a blend of envy and repulsion, people would like to see him cast down like some tragic figure drunk on his hubris. One watches Cruise's recent films as if they were great shrines full of close-ups devoted to his grandiloquence and vanity, and by God, we had better approve or else suffer another media onslaught trying to persuade us to like him. As I wrote in my review of MI III, "One way or another, the man continues to get attention, and after awhile one even gets tired of hearing others say they are tired of Tom Cruise."

So, now having assumed the leadership of United Artists studios, Tom is the executive producer and star of Valkyrie, a World War II drama based on a true story about Colonel Claus von Stauffenberg, the Nazi who led a plot to kill Hitler with a bomb and then take over the government of Germany with the Valkyrie contingency plan. The film establishes at the outset what's at stake by quoting the oath all soldiers swore to Hitler--their unconditional obedience to Hitler, and their willingness to die for him no matter what. We first see Stauffenberg in Tunisia, South Africa, writing treasonous thoughts in his journal (which struck me as risky). He proclaims that Hitler must be stopped because by this point (towards the end of the war), Hitler is clearly the enemy of Germany due to the SS, the Gestapo, the concentration camps, and so on, so there's never any ambiguity about the heroism of the guy. Then planes attack the Germans, nearly killing the Colonel. As the camera dwells lovingly on the bullet-strafed and unconscious Colonel lying in the sand, I wondered how much Cruise enjoyed playing the martyr.

Once the Colonel (now missing an eye, a hand, and some fingers) returns to Berlin and starts to hatch his treasonous plan, I realized that the film is not as bad as MI III, mostly because Valkyrie does build to an effective bombing scene that generates suspense. But I've scarcely ever seen such a self-important erect piece of uber-masculine filmmaking. Even the poster has a tall erect red line rising over Tom's head. As if to make up for the lack of action, the music frequently punctuates scenes with kettle drums and bass. Doors slam, plane engines roar, teletype machines rattle, and soldiers snap into position with numbing frequency.

Tom surrounds himelf with high caliber actors, notably Kenneth Branagh (!?!), Bill Nighy, Tom Wilkinson, and Terence Stamp, but they are all so well known, they continually threw me out of the picture. As also happened when I saw the star-studded The Day the Earth Stood Still, I kept thinking about the other recent films these men have appeared in. Wasn't Nighy a high level vampire? Didn't Stamp just embarrass himself by playing the baddie in Get Smart?

At any rate, the film moves with clockwork rigidity. General Fromm (Wilkinson) says he's happy that someone "with balls" (Cruise, naturally) has arrived at his office. Looking concerned, Stauffenberg tells his wife that "If I fail, they will come after you" and their cute blond children. More soldiers ride in jeeps or stand stiffly in formation as the Colonel says "Redeem yourself. Only God can judge us now." The film has its moments, but in all of its defensive stiff command, its utter inability to lighten up, it is still Tom's myth designed to counteract criticism and especially any mocking videos. All of the booming, crunching thunder of the film just wants to drum us into submission. In this respect, Valkyrie is yet another long, self-righteous, self-serving piece of Tom-promoting propaganda. Hitler would have been proud.
Labels: review Tom Cruise Valkyrie War

I'm just sitting down, mulling my own. I try not to read others' reviews of films I know I'll be trying to review, but yours was so funny and well-written I couldn't stop.

I honestly don't dislike Tom Cruise. Sometimes I like him in his movies. But even I couldn't stop laughing at your take down of Valkyrie.
January 1, 2009 at 5:36 PM

Anonymous said…
Wonderful essay, Film Doctor, and one I can readily stand with, as my own viewing of the film was tarnished by Mr. Cruise, who threatened at all turns to turn this barely mediocre "historical re-enactment" film into self-parody. I am also equally incredulous at how such high-profile people like Kenneth Branagh and Tom Wilkinson were rather wasted (the latter wasn't in this film very much anyway) and how pedestrian the entire presentation was. I quite agree that Tom Cruise is the scourge of movie screens, and playing the central role he scanadlized the film's believability.

The Film Doctor said…
Thanks, Alexander. I did like Tom Cruise in films like War of the Worlds and Rain Man (the latter because he slightly lampoons his image), but I think I'm getting too sensitive to the fine calibrations of his pr. I sometimes wonder if Nicole Kidman is developing some of the same problems. At any rate, I look forward to your review.

Much thanks, Sam, for your supportive comment. I found myself just staring at Kenneth and thinking--what is doing here?!? Didn't he have something better to work on in England?

sophomorecritic said…
I liked your blog a lot at first, but why do you have such strong feminist views and inflict them into every reviews.

Anonymous said…
I completely disagree with the previous poster, and find the views expressed as frankly preposterous.
January 2, 2009 at 1:15 AM

I don't mind if you think my reviews tend to have a feminist slant. I might have picked that up from Pauline Kael. Recent movies often reflect modern-day problems with masculinity--the flattery of immature adolescent guys, for instance, that goes along with the 16-year old male targeted audience of many movies. In the case of Tom Cruise, he just seems to have problems with aging well, say, in contrast to Clint Eastwood. I don't necessarily mind macho actors, but Tom is too neurotically concerned with his image to be comfortably masculine. I often find I have to go to older films such as The Great Escape to find that kind of male ease and assurance.
January 2, 2009 at 10:36 AM

BeaufortBay said…
I thought the review of Valkyrie as ego-possessed was probably emotionally true. The old Tom Cruise of Born on the Fourth of July (hard work) and Risky Business (cuteness) is gone, rendered dead when Tom jumped on that couch on Oprah. Now he is probably self-conscious, self-indulgent, self-absorbed. It was sad when even Eyes Wide Shut seemed pretentious, unjoyful, a bad end to Kubrick's great career--more like Last Year at Marienbad than The Paths of Glory or 2001. Cruise seems to be a poseur now.
I've been disappointed in Matthew Broderick as well lately, as compared with Ferris Buehler. Denzel Washington has aged better. So has Tom Hanks. Even Barbra Streisand was good as an oversexed old hippie in Meet the Fokkers, and I don't mind Jane Fonda as a harridan or Diane Keaton as a well-preserved mature woman who can still show her boobs. I bet even Jay-Lo has some good acting left in her.

Oh: there was a PBS special on last night about the great German Jewish directors (Lubitch, Lang, Siodmak) and writers (Wilder) who fled Hitler. I didn't realize there was so much German talent in Casablanca. Some of the stuff done before Hitler, as with Caligari, M, Metropolis, and some silent films that look great, was the best work of the early 20th century other than a few Hollywood films.
January 2, 2009 at 1:04 PM

Coleman's Corner in Cinema... said…
Seriously, though, I believe that huge red line on the film's poster comes from the red line that streaks down the pants of a German general.
January 2, 2009 at 1:52 PM

The Film Doctor said…
Thanks for your thoughts, BeaufortBay, although I think you were a little harsh on Eyes Wide Shut. I saw it recently and it holds up well, as most of Kubrick's work tends to do.

Yes, the red line may come from the pant stripe of a German general, but I was thinking metaphorically. As an image, it still suggests rigidity, and Lord knows there are enough other examples to choose from in the film itself.
January 2, 2009 at 7:46 PM