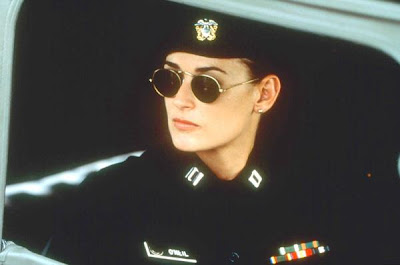 [Before her twitterfame with Ashton, Demi Moore found other ways to promote herself. Here's another unrevised Film Doctor review from the summer of 1997.]
Emphasis on the second syllabus, DehMEEE Moore's new movie G. I. Jane, like Air Force One, proved more entertaining than I expected.  Last spring, studio executives polled the American public as to whether they would be interested in seeing a new paramilitary Demi Moore movie.  Most of the respondents stressed they were sick of Demi and refused to see the film because she was in it.  Concerned, the studio executives delayed the film's release until recently.
You could say Demi can't act; she certainly has a far more limited range than, say, Michelle Pfeiffer has.  You could also say Demi cynically exploits her amply proportioned body for profit.  Ever since she first posed in Oui magazine, she's known how to get the public's attention with flesh.  She posed nude and pregnant on the cover of Vanity Fair.  Her recent particularly bad movie Striptease showed the limits of her circus-like self-promotion.  As she moved like a weirdly disconnected tank through her strip show scenes (while her body undulated, her face looked like she was preparing for the GRE exams), the movie tanked in the box office.
Fortunately for us all, Demi Moore as Navy SEAL in training suits her abilities pretty well.  She fights the top brass for equal treatment from the sniggering mustached "Master Chief" Viggo Mortenson, but most of the time she blandly follows orders, and so the movie viewer can wonder at the fraternity hazing atmosphere of becoming a Navy SEAL.
Inductees get to stay up all hours of the night, do push-ups in freezing cold water, eat dinner out of lunch's garbage can, and push big barrels around in the Florida dunes as sadistic Navy officers yell in their ears with megaphones.  As Demi grunts, sweats, and has half of her face nearly sheared off in training, the director, Ridley Scott, keeps cutting back to the Washington Monument and other Washington DC iconography to show the skullduggering politics behind her appointment to this most difficult assignment. There we see a Texas-drawling Anne Bancroft whoop it up and make deals as a ball-breaking Arms Committee senator.  I liked seeing the former Mrs. Robinson sink her teeth into such a empowered role.
Basically the plot closely follows a hundred boot camp movies.  I kept thinking of Bill Murray in Stripes, but also you could conjure up Private Benjamin and An Officer and a Gentleman.  The new trainee undergoes every kind of humiliation and physical punishment to eventually attain a new freedom in discipline, not to mention fun hand-on-your-throat walkie talkies and some nifty hand signals to use when you jump into the beach-front shrubbery.  There's something weirdly androgynously erotic about watching Demi shave all of her hair off, and she keeps going off to do Rocky-like one arm push-ups so the camera can dwell upon her statuesque muscle tone in the half-light (these scenes reminded me of Cindy Crawford's workout videos).
The climax of the movie involves Demi getting tortured by her Master Chief for "intel" info in some faux POW camp.  After several blows that should have caused her to lose all of her teeth and suffer several concussions, I marvelled how, in the lack of a real enemy, American war movies must manufacture one.  The torture scenes looked very "real" and I wonder how much we were supposed to pay attention to Americans hurting Americans here.
Late in the movie, Demi gets to fight in a semi-real battle off the coast of Libya to prove her mettle.  Here the director relies on rapidly moving his zoom lens back and forth to create the urgency of battle sequences, but I don't want to ruin all of the good jokes of the film.
G. I. Jane proves to be a surprisingly fun cornball cheese entertainment.  In spite of the filmmakers' good intentions and all of the feminist empowerment going on, we can all take pleasure in watching Demi Moore suffer for her stardom.
Labels: G. I. Jane

Jason Bellamy said…
I remember Siskel and Ebert talking about this movie and noting that while Striptease is a pathetic and shallow use of Moore's physique, this is a bold and noble one. I agree.

I don't remember the movie all that well, but the head-shaving scene and the one-armed push-ups are burned into memory. That stands for something.

Good post. The other fun thing about this review: It doesn't mention by name one of Demi's costars: Viggo Mortensen, back before he was a name.
March 25, 2009 at 8:41 AM

Richard Bellamy said…
1997 was the first year I began - along with Jason of the Cooler - selecting my own nominees for Oscar-type categories and choosing winners. Demi Moore won Best Actress! It was a cliched film but she was great - and what muscles!
March 25, 2009 at 1:21 PM

The Film Doctor said…
Thanks Jason,

Yes, I mentioned Viggo. He has definitely improved his career profile since then.

Wow, best actress. Demi was an original member of the brat pack in St. Elmo's Fire and she invested in Planet Hollywood restaurants. I've never given much thought of her as an actress. She has the Madonna-like ability to get attention.
March 25, 2009 at 8:04 PM