Poppy amidst the damaged: 2 notes on Happy-Go-Lucky 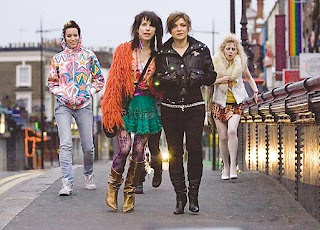 1) If Happy-Go-Lucky lived up to its tag line--"The one movie this fall that will put a smile on your face"--then it would be insufferable, but I like the way the assured director/writer Mike Leigh immerses Poppy (Sally Hawkins), the cheerful 30-year-old primary school teacher, into a group of psychologically damaged people. Leigh balances his portait of joy with a borderline psychotic driving instructor Scott (Eddie Marsan), a child who beats up other kids in the playground, a dance instructor who has an emotional breakdown in mid-lesson, and a Stanley Kubrick-lookalike homeless man who spouts nonsense (I can easily imagine Leigh having a bit of fun at Kubrick's expense). Of course other characters such as Poppy's flatmate Zoe (Alexis Zeckerman) and a social worker love interest Tim (Samuel Roukin) come off as looking therapeutically put together, but often I was struck with how others, especially men, tended to fritz out in the course of the movie. In contrast to other films with villainous antagonists, Happy-Go-Lucky has characters at war with themselves. Mostly Poppy has to negotiate herself safely through them.
2) I also wondered about what Leigh might be saying about the emotional release of different forms of movement. Reminiscent of the final shot of every Avengers episode with John Steed and Mrs. Peel trying out every possible form of conveyance, Happy-Go-Lucky ends with a boat ride that seems deliberately in contrast to the angst-filled, claustrophobic driving lessons. The last shot gradually moves to an extreme long shot of a beautiful sunlit lake that reminded me of the open form shots at the end of Boudu Saved from Drowning. Also, Happy-Go-Lucky begins with a montage of Poppy bicycling serenely through the streets of London just before someone steals her bicycle (an homage to The Bicycle Thief?). One could also include the scenes of Poppy dancing and jumping on the trampoline, as well as her pretending to fly as a bird with her students as more examples of how she stays in motion.  Her character is all about movement, but Leigh slants the film in favor of individual, leisurely motions and away from machine-driven ones. One wonders how much we are supposed to associate Scott's inchoate rage with the many rules and constraints of city driving. Earlier in the film, Poppy discusses with her fellow primary school teachers how their students often go home to play video games all weekend, and later we witness Poppy's married sister's hen-pecked husband badly itching to play video games if only his wife would let him. Perhaps Leigh means to associate video game-playing and driving as ways that machines stifle the body's need to express itself.
Labels: Happy-Go-Lucky

I love your observations on Poppy's movement. I haven't heard that insight before and I think it's a great one. I especially love that last shot of Poppy and Zoe on the boat. The camera takes it's time zooming out and it's a great way to let out a breath after a deceptively tense movie.
March 21, 2009 at 1:11 AM

The Film Doctor said…
Thanks, Fox. In comparison, Duplicity mostly just has Roberts and Owen endlessly walking around, and that may be part of the problem with that film.
March 21, 2009 at 10:45 AM