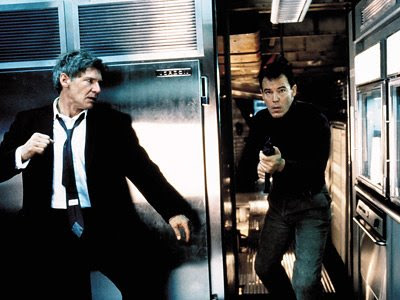 Note: For no particular reason, The Film Doctor continues to revisit the summer blockbuster wannabes of 1997.  Next up: G.I. Jane.
I get tired of military movies.  There's always the snare drumbeat, the brass band music, the official-looking credits against a flag blue backdrop, some hush hush special marine fighting corps jumping out of helicopters at night with their infragreen night glasses, swooping down on the enemy military installation.  As if we don't already see enough of this on TV recruiting ads.  In fact, this is the way Air Force One begins, a deeply silly but admittedly entertaining film that resembles the original Die Hard, Con Air, and any Indiana Jones flick.
You know you are in a fantasy movie right away because Harrison Ford as President of the United States immediately stands up to give an impassioned extemporaneous speech against terrorism without his teleprompter.  He claims he will not negotiate with terrorists and we in the audience have the pleasure of knowing he will eat his words soon enough.
Gary Oldman and a gang of terrorists hop on board the Air Force One, breaking through tight security by showing their driver's licenses to the man at the gate.  We see a tanned youthful-looking Ford lollygag with his wife and kid in the back presidential bedroom of the jet.  Gosh, they love each other!  Then, an inside secret service man working for the Russian retro-nationalists casually opens the closet with all of the machine guns inside, and we're off on a freewheeling flying terrorist jaunt.
Because of the way the studio kept pounding the preview into my eye sockets all late spring and summer, I badly wanted to hate this movie.  But it is fun to sit through just as long as you don't closely examine the extreme unoriginality of the plot or smell the mouldering political underpinnings.
I liked watching a terrorist pilot Air Force One around a German airport like a drunkard, almost plowing into one of the hangars, barely clearing another airplane.  Frequently, you get to see the president flying around in the air, hanging on to a strap or dangling off a metal line.  Once Ford starts sneaking around the jet, he gets unconscionably long periods of time to find a portable telephone in the luggage to enable him to call Glenn Close as vice president back at the White House. While Gary Oldman amuses himself by speaking in a thick guttural Russian accent and shooting hostages, Ford pretty much gets the run of the plane, pouring out the fuel, and clobbering bad guy Russians over the head with a metal chair.
I ultimately felt the movie cheated the most on its politics.  It turns out that Oldman's character wants the Soviet Union back, thus making the whole proceedings a Hunt for the Red October-esque return-to-the-cold-war wish fulfillment fantasy.  I can see the studio storyboarding conference now. Recreate the president as a daredevil action figure and bring back some nasty commies to fight against.  Oh, the nostalgia the screenplay writers have for such simple good/evil dualities!  When Oldman pistol whips Ford, the director Wolfgang Peterson kept cutting to the grimaces of the president's officers.  The audience is invited to snarl away at this blatant mistreatment of our number one American and then cheer him on as he fights back.
Ford is the American way personified, the next best thing to Sylvester Stallone as Rocky wrapped in a flag, and I felt a little uncomfortable as any moral ambiguity evaporates under all of the heroism.  You enjoy the b movie action sequences, all of the jets streaming around, the loyal little citizen hostages fighting for what they believe is true and right, the jump cuts back to CNN news briefs or worried Americans holding candlelight vigils in front of the White House, but ultimately I felt guilty for liking anything about Air Force One. Remember to pick your brain up at the door as you leave.
Labels: Air Force One

Richard Bellamy said…
I enjoyed this film well enough. It's fun when Ford plays a basically ordinary guy who kicks butt to save his family.

I had hoped the film would focus on suspense over ridiculous action, but the film indulged excessively in the ridiculous action. Worst image: the president dangling on the line from the jet plane. Okay, I suppose it's possible, but dispense with the cheesy CGI long shot of the little president dangling on the line, which I took more as a metaphor for the precarious nature of the presidency than as an image intended to be in any way effective.

It's not a summer blockbuster wannabe, but one of my favorite movies of 1997, besides Titanic, is The Edge with Anthony Hopkins and Bart the Bear and one of my favorite lines in any film: "We're gonna kill the motherfucker."
March 24, 2009 at 12:21 PM

Thanks for the comment. I don't remember Air Force One at all. I watched a film a week for much of the year, my first year of published reviewing, so it's weird to go back and notice my early exploratory snarking. That summer particularly seemed a blur of bombastic crap at the cineplex. I liked Titanic too, even as other critics liked to trash it.
March 24, 2009 at 7:44 PM

Jason Bellamy said…
My memories are that I enjoyed Oldman camping it up (always a good thing) but loathed that President on a Wire sequence. As Hokahey says, not the concept so much as the execution.