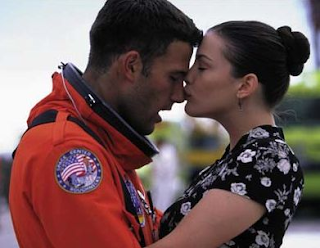 Note: Way back in 1998, long before Pirates of the Caribbean, Jerry Bruckheimer produced a little summer film called Armageddon. The Film Doctor was there to review it. It might help to know that yet another possible earth-destroying asteroid film called Deep Impact came out that same summer. I'm not entirely sure that this review makes any kind of coherent sense, but then again, neither did the film.
The Michael Bolton of movie producers, Jerry Bruckheimer makes jingoistic sledgehammer movies. Many years ago, Top Gun set the mold for power rock-n-roll machismo with Tom Cruise as the new American Nazi. Since then, I have suffered through The Rock and most recently Con Air in the same vein.
Now, on Independence Day, when everyone has gotten maximally nihilistically bored with summer, Bruckheimer brings us Armageddon, quite simply the end result of summer movies as we know it. How to describe Armageddon's uniquely unoriginal concussive effect? You know those Dow Chemical ads on TV that have no clear point to them, since you never see any chemicals, but you do see lots of innocent Americans romping around the general store and the feed silo in a kind of backlit corporate fantasy of rural America? That pretty much nonexistent land of bib overalls, checkers games on the main square, and couples necking in the Chevrolet convertible?
Well, Armageddon often looks like that, a movie that's basically an ad for itself, a testosterone-dazed celebration of endangered straight white male American values like military might, stripper bars, oil drilling, apple pie, and Norman Rockwell. I spent half of the movie fully prepared to stand up and pledge my allegiance to the flag, but then another gun metal asteroid shower would knock me down in my seat.
No doubt conscious of the monotony of Deep Impact's similar plot line, Bruckheimer jazzes up Armageddon with more big explosions and "suspenseful" plot complications. A meteor shower sends fireballs all over New York City (There's even an opening sequence when a small dog chews on a toy Godzilla, the movie's one attempt at camp irony).
Regardless, Bruce Willis runs an oil rig somewhere and he's hopping mad at Ben Affleck for sleeping with his daughter Liv Tyler. Since the moviemakers are far more concerned with propulsive machines and explosions than with humanity, character development takes place in brief rock video vignettes.
Affleck runs an Animal Cracker across Tyler's belly off in some backlit sunset prairie paradise. The sensitive strings swell as Bruce cries with Tyler near the Stonehenge-like monument to Apollo 1, but mostly you see a bunch of NASA men freaking out over the oncoming asteroid the size of Texas. Bruce gets to handpick a ragtag crew of oil riggers to save the earth in a couple space shuttles, and then you spend the rest of the 2 and 1/2 hour movie waiting around on some leftover Lost in Space prickly black set as Bruce gives speech after noble speech when there should be no time left to blow up the asteroid.
Aside from some humorous bits early on when the colorful working class oil riggers resist NASA training, the movie largely turns into a Chevy/Air Force commercial. People all across the world look up in the sky and pray for American technology to save them. Liv Tyler has hysterics in the NASA control room. Ben Affleck sings "Leaving on a Jet Plane" offkey to Tyler on the launch pad and then nearly gets killed about 17 times. A doofus Russian astronaut appears out in space for some leftover cold war Soviet-bashing and reconciliation. Up on the asteroid, the land terrain vehicles have machine guns for no discernable reason (enemy aliens?) except that we're in a Bruckheimer movie.
Does Bruce Springsteen show up and sing "Born in the USA"? Will the planet earth survive, let alone still circle around America? Will our lovable beer-drinking stripper-ogling working boys come home heroes? Will Rosanne grab her crotch and sing the Star Spangled Banner? With every flag, hero, and nuclear warhead, I kept feeling bludgeoned with forced love for my country.
On your knees, Bruckheimer seems to imply, get down on your knees.
Labels: Armageddon

Anonymous said…
Bruckheimer ranks ahead of Orson Welles, John Ford and Stanley Kubrick among American directors in terms of his visionary approach to filmmaking.


Just kidding of course! Down on your knees indeed Film Dr.! This was a gleefully dead-on and entertaining piece on a bonafide American hack.
March 11, 2009 at 8:49 PM

Joel Bocko said…
In defense of the Boss, whom I've been listening to a lot lately, "Born in the USA" demonstrates a level of ambiguity which I don't think Bay could muster, if he wanted to. But I love all the connections to slightly ominous corporate techno-commercials.
March 11, 2009 at 11:59 PM

Uncle Gustav said…
Sheesh, you critics are all alike.

But we're appraising talent here, not personal wealth. By your reasoning we should hail Donald trump as a true visionary and magnanimous soul.

As an "artist" Bruckheimer's a hack.

The Film Doctor said…
Thanks Sam,

I often wonder if these old reviews are worth revamping for the blogosphere. I'm glad some of the jokes still work.

I know what you mean about "Born in the USA," but I remember people mostly listening to the refrain of the song as a patriotic slogan, and not catching Springsteen's subtleties in the lyrics at all.

I didn't even mention Michael Bay. Thanks for clarifying that point. It makes perfect sense that he directed Armageddon after one sees Pearl Harbor. I think Armageddon left me slightly dazed, in a kind of stupor. You can sense it in the choppiness of the style of the review.
March 12, 2009 at 2:33 PM